Best Books of 2021: Fiction and Poetry

I’ve chosen my 15 fiction and 15 nonfiction favourites (coming up tomorrow) from 2021, along with a few poetry selections at the end of this post. Two of my picks are graphic novels!

Under the Blue by Oana Aristide: Fans of Station Eleven, this one’s for you: the best dystopian novel I’ve read since Mandel’s. Aristide started writing in 2017, and unknowingly predicted a much worse pandemic than Covid-19. In July 2020, Harry and sisters Ash and Jessie are among mere thousands of survivors worldwide. Their plan is to flee England for Uganda, out of range of Europe’s at-risk nuclear reactors. An epic road trip ensues. A propulsive cautionary tale that also reminded me of work by Louisa Hall and Maja Lunde.

The Push by Ashley Audrain: Blythe Connor, living alone with her memories, ponders what went wrong with her seemingly perfect family: a handsome architect husband, Fox, and their daughter Violet and baby son Sam. How much of what happened was because of Violet’s nature, and how much was Blythe’s fault for failing to be the mother the girl needed? The fact that her experience with Sam was completely different makes her feel ambivalent about motherhood. A cracking psychological thriller with an unreliable narrator.

Site Fidelity by Claire Boyles: A love for their Colorado homeland inspires women’s environmental activism in a linked short story collection. Hope and perseverance are watchwords for Boyles’s characters, many of whom are single mothers or unmarried women. Nearly half of the stories center on a trio of feisty sisters. This reminded me most of Love Medicine by Louise Erdrich, as well as Barbara Kingsolver’s early fiction set in the Southwest. It got me eagerly awaiting whatever Boyles writes next.

A Lie Someone Told You About Yourself by Peter Ho Davies: Davies’ minimalist approach – short sections skating over the months and years, wryly pulling out representative moment – crystallizes fatherhood, illuminating its daily heartaches and joys. The tone is just right in this novella, showing both sides of parenthood and voicing things you aren’t allowed to think, or at least not to admit to, starting with abortion, which would-be fathers aren’t expected to have strong feelings about. I loved the rumination on the role that chance plays in a life.

The Living Sea of Waking Dreams by Richard Flanagan: Extinction, personal and global, is at the heart of this timely and enchanting story. It starts off as a family drama. Francie, the 86-year-old matriarch, is in a Tasmanian hospital after a brain bleed. Her three middle-aged children can’t bear to let her go. In an Australia blighted by bushfires, species loss mirrors Francie’s physical and mental crumbling. Smartphone addiction threatens meaningful connection. And then characters start to literally disappear, part by part…

Mrs Death Misses Death by Salena Godden: Grief Is the Thing with Feathers meets Girl, Woman, Other would be my marketing shorthand for this one. Poet Salena Godden’s debut novel is a fresh and fizzing work, passionate about exposing injustice but also about celebrating simple joys, and in the end it’s wholly life-affirming despite a narrative stuffed full of deaths real and imagined. The novel balances the cosmic and the personal through Wolf’s family story. Unusual, musical, and a real pleasure to read.

Early Morning Riser by Katherine Heiny: This tickled my funny bone. A cross between Kitchens of the Great Midwest and Olive Kitteridge, it’s built of five extended episodes, crossing nearly two decades in the lives of Jane and Duncan and lovingly portraying the hangers-on who compose their unusual family constellation in Boyne City, Michigan. All the characters are incorrigible but wonderful. Bad things happen, but there’s a core of love as Heiny explores marriage and parenting. A good-natured book that feels wise and bittersweet.

No One Is Talking About This by Patricia Lockwood: This starts as a flippant skewering of modern life. A woman who became a social media star by tweeting quips like “Can a dog be twins?” reflects on life on “the portal” and under “the dictator.” Midway through the book, she gets a wake-up call when her mother summons her back to the Midwest for a family emergency. It’s the about-face that makes this novel, forcing readers to question the value of a digital existence based on glib pretence. Funny, but with an ache behind it.

When the Stars Go Dark by Paula McLain: I almost never pick up a thriller, but my love for McLain’s earlier fiction attracted me and I ended up loving this. Really, I can’t imagine a better take on the genre. Anna Hart is a detective who, fleeing tragedies from her past, throws herself into the linked mystery of three missing girls in California. The book is rich in atmosphere: McLain’s love of the coast and forests is clear, and the fact that the book is set in 1993 means that Anna has to rely on old-fashioned policework rather than technology.

In by Will McPhail: Alternately laugh-out-loud funny and gentle. This debut graphic novel is a spot-on picture of modern life in a generic city. Nick never knows the right thing to say. The bachelor artist’s well-intentioned thoughts remain unvoiced; all he can manage is small talk. That starts to change when he meets Wren, a Black doctor who sees past his pretence. If only he can find the magic words that elicit honesty, he might make real connections with other human beings. A good old-fashioned story, with a wide emotional range.

Heartstopper, Volume 4 by Alice Oseman: This super-cute series was my summer crush. I liked this best of the first four. I admired how Oseman works in serious issues teens might face but has still created something so full of queer joy. While Charlie has been figuring out when to tell Nick he loves him, Nick has been working out how to confront Charlie about his anorexia. They learn that love doesn’t solve everything, but that a friend or boyfriend can be there to listen. Oseman really brings out the supporting cast in this volume, too.

Detransition, Baby by Torrey Peters: A sparkling, sexy comedy with a tender heart beneath the zingers. Peters has set herself up as the Jane Austen of the trans community, tracing the ins and outs of relationships with verve and nuance. For me this was a valuable book simply for normalizing trans sexuality. The themes are universal, after all: figuring out who you are and what the shape of your life will be. I admire when authors don’t pander to readers by making things easy for those who are unfamiliar with a culture. Great lines abound.

Brood by Jackie Polzin: Polzin’s debut is a quietly touching story of a woman in the Midwest raising chickens and coming to terms with the shape of her life. The unnamed narrator is Everywoman and no one at the same time. At one point she reveals, with no fanfare, that she miscarried four months into pregnancy in the bathroom of one of the houses she cleans. There is a bittersweet tone to this short work. It’s a low-key, genuine portrait of life in the in-between stages and how it can be affected by fate or by other people’s decisions.

Bewilderment by Richard Powers: As environmentally aware as The Overstory, but with a more intimate scope, focusing on a father and son who journey together in memory and imagination as well as in real life. Neurodivergent Robin is a scientific marvel and an environmental activist. Theo studies other planets that rival an ailing Earth, and another state allows Robin to reconnect with his late mother. When I came to the end, I felt despondent and overwhelmed. But as time has passed, the book’s feral beauty has stuck with me.

In the Company of Men: The Ebola Tales by Véronique Tadjo: This creative and compassionate work takes on various personae to plot the course of the Ebola outbreak in West Africa in 2014–16. The suffering is immense, and there are ironic situations that only compound the tragedy. Tadjo flows freely between all the first-person voices, even including non-human narrators such as baobab trees and a fruit bat. Local legends and songs, along with a few of her own poems, also enter into the text.

If I had to pick my novel of the year, it would be The Living Sea of Waking Dreams. 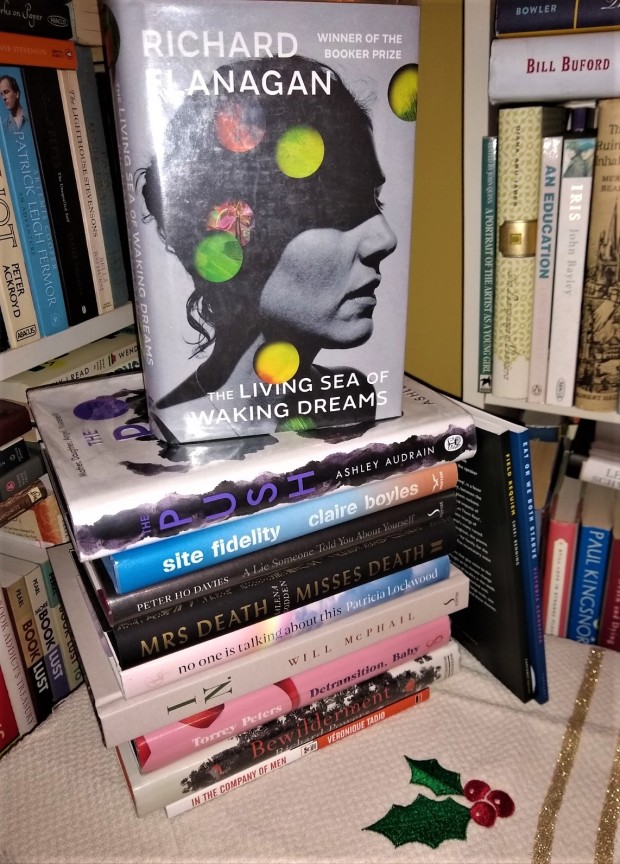 Books not pictured were from the library or read electronically.

Pilgrim Bell by Kaveh Akbar: An Iranian American poet imparts the experience of being torn between cultures and languages, as well as between religion and doubt, in this gorgeous collection of confessional verse. Food, plants, animals, and the body supply the book’s imagery. Wordplay and startling juxtapositions lend lightness to a wistful, intimate collection that seeks belonging and belief. (Reviewed for Shelf Awareness.)

Field Requiem by Sheri Benning: Benning employs religious language to structure her solemn meditations on the degraded landscape of Saskatchewan, a place where old ways have been replaced by impersonal, industrial-scale farming. You can hear the rhythms of psalms and the echoes of the requiem mass. Alliteration pops out from lists of crops and the prairie species their cultivation has pushed to the edge of extinction. This is deeply place based writing. With its ecological conscience and liturgical sound, it’s just my kind of poetry.

Eat or We Both Starve by Victoria Kennefick: In this audacious debut collection, the body is presented as a battleground: for the brain cancer that takes the poet’s father; for disordered eating that entwines with mummy issues; for the restructuring of pregnancy. Families break apart and fuse into new formations. Cannibalism and famine metaphors dredge up emotional states and religious doctrines. There’s a pleasingly morbid cast to the book, but it also has its lighter moments. Rich with imagery and alliteration, this is also just my kind of poetry.

What 2021 releases do I need to catch up on right away?