Three May Graphic Novel Releases: Orwell, In, and Coma

These three terrific graphic novels all have one-word titles and were published on the 13th of May. Outwardly, they are very different: a biography of a famous English writer, the story of an artist looking for authentic connections, and a memoir of a medical crisis that had permanent consequences. The drawing styles are varied as well. But if the books share one thing, it’s an engagement with loneliness: It’s tempting to see the self as being pitted against the world, with illness an additional isolating force, but family, friends and compatriots are there to help us feel less alone and like we are a part of something constructive.

[Translated from the French by Edward Gauvin]

George Orwell was born Eric Blair in Bengal, where his father worked for the colonial government. As a boy, he loved science fiction and knew that he would become a writer. He had an unhappy time at prep school, where he was on reduced fees, and proceeded to Eton and then police training in Burma. Already he felt that “imperialism was an evil thing.” Among this book’s black-and-white panes, the splashes of colour – blood, a British flag – stand out, and guest artists contribute a two-page colour spread each, illustrating scenes from Orwell’s major works. His pen name commemorates a local river and England’s patron saint, marking his preoccupation with the essence of Englishness: something deeper than his hated militarism and capitalism. Even when he tried to ‘go native’ for embedded journalism (Down and Out in Paris and London and The Road to Wigan Pier), his accent marked him out as posh. He was opinionated and set out “rules” for clear writing and the proper making of tea.

The book’s settings range from Spain, where Orwell went to fight in the Civil War, via a bomb shelter in London’s Underground, to the island of Jura, where he retired after the war. I particularly loved the Scottish scenery. I also appreciated the notes on where his life story entered into his fiction (especially in A Clergyman’s Daughter and Keep the Aspidistra Flying). During World War II he joined the Home Guard and contributed to BBC broadcasting alongside T.S. Eliot. He had married Eileen, adopted a baby boy, and set up a smallholding. Even when hospitalized for tuberculosis, he wouldn’t stop typing (or smoking).

Christin creates just enough scenes to give a sense of the sweep of Orwell’s life, and incorporates plenty of the author’s own words in a typewriter font. He recognizes all the many aspects, sometimes contradictory, of his subject’s life. And in an afterword, he makes a strong case for Orwell’s ideas being more important now than ever before. My knowledge of Orwell’s oeuvre, apart from the ones everyone has read – Animal Farm and 1984 – is limited; luckily this is suited not just to Orwell fans but to devotees of life stories of any kind.

In by Will McPhail

Nick never knows the right thing to say. The bachelor artist’s well-intentioned thoughts remain unvoiced, such that all he can manage is small talk. Whether he’s on a subway train, interacting with his mom and sister, or sitting in a bar with a tongue-in-cheek name (like “Your Friends Have Kids” or “Gentrificchiato”), he’s conscious of being the clichéd guy who’s too clueless or pathetic to make a real connection with another human being. That starts to change when he meets Wren, a Black doctor who instantly sees past all his pretence.

Like Orwell, In makes strategic use of colour spreads. “Say something that matters,” Nick scolds himself, and on the rare occasions when he does figure out what to say or ask – the magic words that elicit an honest response – it’s as if a new world opens up. These full-colour breakthrough scenes are like dream sequences, filled with symbols such as a waterfall, icy cliff, or half-submerged building with classical façade. Each is heralded by a close-up image on the other person’s eyes: being literally close enough to see their eye colour means being metaphorically close enough to be let in. Nick achieves these moments with everyone from the plumber to his four-year-old nephew.

Alternately laugh-out-loud funny and tender, McPhail’s debut novel is as hip as it is genuine. It’s a spot-on picture of modern life in a generic city. I especially loved the few pages when Nick is on a Zoom call with carefully ironed shirt but no trousers and the potential employers on the other end get so lost in their own jargon that they forget he’s there. His banter with Wren or with his sister reveals a lot about these characters, but there’s also an amazing 12-page wordless sequence late on that conveys so much. While I’d recommend this to readers of Alison Bechdel, Craig Thompson, and Chris Ware (and expect it to have a lot in common with Kristen Radtke’s forthcoming Seek You: A Journey through American Loneliness), it’s perfect for those brand new to graphic novels, too – a good old-fashioned story, with all the emotional range of Writers & Lovers. I hope it’ll be a wildcard entry on the Sunday Times Young Writer of the Year Award shortlist.

With thanks to Sceptre for the free copy for review.

In May 2013, Zara Slattery’s life changed forever. What started as a nagging sore throat developed into a potentially deadly infection called necrotising fascitis. She spent 15 days in a medically induced coma and woke up to find that one of her legs had been amputated. As in Orwell and In, colour is used to differentiate different realms. Monochrome sketches in thick crayon illustrate her husband Dan’s diary of the everyday life that kept going while she was in hospital, yet it’s the coma/fantasy pages in vibrant blues, reds and gold that feel more real.

Slattery remembers, or perhaps imagines, being surrounded by nightmarish skulls and menacing animals. She feels accused and guilty, like she has to justify her continued existence. In one moment she’s a puppet; in another she’s in ancient China, her fate being decided for her. Some of the watery landscapes and specific images here happen to echo those in McPhail’s novel: a splash park, a sunken theatre; a statue on a plinth. There’s also a giant that reminded me a lot of one of the monsters in Spirited Away.

Meanwhile, Dan was holding down the fort, completing domestic tasks and reassuring their three children. Relatives came to stay; neighbours brought food, ran errands, and gave him lifts to the hospital. He addresses the diary directly to Zara as a record of the time she spent away from home and acknowledges that he doesn’t know if she’ll come back to them. A final letter from Zara’s nurse reveals how bad off she was, maybe more so than Dan was aware. 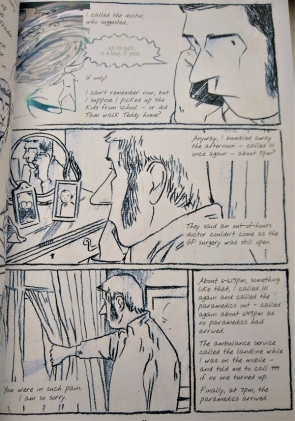 This must have been such a distressing time to revisit. In this interview, Slattery talks about the courage it took to read Dan’s diary even years after the fact. I admired how the book’s contrasting drawing styles recreate her locked-in mental state and her family’s weeks of waiting – both parties in limbo, wondering what will come next.

Brighton, where Slattery is based, is a hotspot of the Graphic Medicine movement spearheaded by Ian Williams (author of The Lady Doctor). Regular readers know how much I love health narratives, and with my keenness for graphic novels this series couldn’t be better suited to my interests.

With thanks to Myriad Editions for the free copy for review.