#NovNov Translated Week: In the Company of Men and Winter Flowers

I’m sneaking in under the wire here with a couple more reviews for the literature in translation week of Novellas in November. These both happen to be translated from the French, and attracted me for their medical themes: the one ponders the Ebola crisis in Africa, and the other presents a soldier who returns from war with disfiguring facial injuries.

[Translated from the French by the author and John Cullen; Small Axes Press; 133 pages] 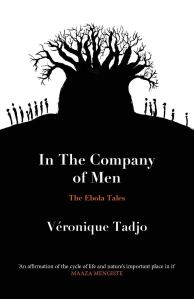 This creative and compassionate work takes on various personae to plot the course of the Ebola outbreak in West Africa in 2014–16: a doctor, a nurse, a morgue worker, bereaved family members and browbeaten survivors. The suffering is immense, and there are ironic situations that only compound the tragedy: the funeral of a traditional medicine woman became a super-spreader event; those who survive are shunned by their family members. Tadjo flows freely between all the first-person voices, even including non-human narrators such as baobab trees and the fruit bat in which the virus likely originated (then spreading to humans via the consumption of the so-called bush meat). Local legends and songs, along with a few of her own poems, also enter into the text.

Like I said about The Appointment, this would make a really interesting play because it is so voice-driven and each character epitomizes a different facet of a collective experience. Of course, I couldn’t help but think of the parallels with Covid – “you have to keep your distance from other people, stay at home, and wash your hands with disinfectant before entering a public space” – none of which could have been in the author’s mind when this was first composed. Let’s hope we’ll soon be able to join in cries similar to “It’s over! It’s over! … Death has brushed past us, but we have survived! Bye-bye, Ebola!” (Secondhand purchase)

[Translated from the French by Adriana Hunter; 172 pages]

With Remembrance Day not long past, it’s been the perfect time to read this story of a family reunited at the close of the First World War. Jeanne Caillet makes paper flowers to adorn ladies’ hats – pinpricks of colour to brighten up harsh winters. Since her husband Toussaint left for the war, it’s been her and their daughter Léonie in their little Paris room. Luckily, Jeanne’s best friend Sidonie, an older seamstress, lives just across the hall. When Toussaint returns in October 1918, it isn’t the rapturous homecoming they expected. He’s been in the facial injuries department at the Val-de-Grâce military hospital, and wrote to Jeanne, “I want you not to come.” He wears a white mask over his face, hasn’t regained the power of speech, and isn’t ready for his wife to see his new appearance. Their journey back to each other is at the heart of the novella, the first of Villeneuve’s works to appear in English.

I loved the chapters that zero in on Jeanne’s handiwork and on Toussaint’s injury and recovery (Lindsey Fitzharris, author of The Butchering Art, is currently writing a book on early plastic surgery; I’ve heard it also plays a major role in Louisa Young’s My Dear, I Wanted to Tell You – both nominated for the Wellcome Book Prize), and the two gorgeous “Word is…” litanies – one pictured below – but found the book as a whole somewhat meandering and quiet. If you’re keen on the time period and have enjoyed novels like Birdsong and The Winter Soldier, it would be a safe bet. (Cathy’s reviewed this one, too.)

With thanks to Peirene Press for the free copy for review.

(In a nice connection with a previous week’s buddy read, Villeneuve’s most recent novel is about Helen Keller’s mother and is called La Belle Lumière (“The Beautiful Light”). I hope it will also be made available in English translation.)