Reading Ireland Month is hosted each March by Cathy of 746 Books. This year I read works by four Irish women: a meditation on birds and craft, hard-hitting poems about body issues, autofiction that incorporates biography and translation to consider the shape of women’s lives across the centuries, and a novel that jets between Hong Kong and Scotland. Two of these were sent to me as part of the Rathbones Folio Prize shortlist. I have some Irish music lined up to listen to (Hallow by Duke Special, At Swim by Lisa Hannigan, Chop Chop by Bell X1, Magnetic North by Iain Archer) and I’m ready to tell you all about these four books. 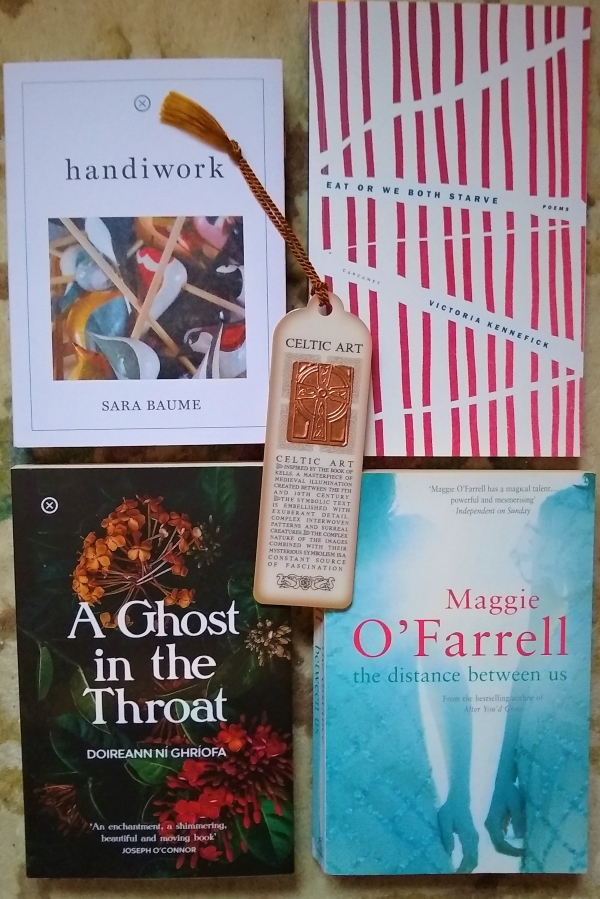 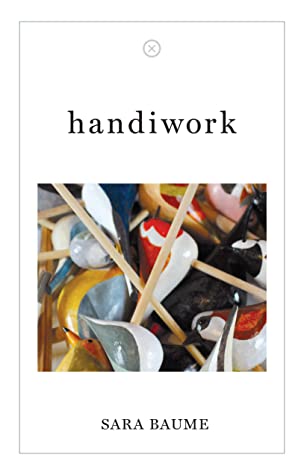 Back in February 2016, I reviewed Baume’s debut novel, Spill Simmer Falter Wither, for Third Way magazine. A dark story of a middle-aged loner and his adopted dog setting off on a peculiar road trip, it was full of careful nature imagery. “I’ve always noticed the smallest, quietest things,” the narrator, Ray, states. The same might be said of Baume, who is a visual artist as well as an author and put together this gently illuminating book over the course of 2018, at the same time as she was working on several sculptural installations. In short sections of a paragraph or two, or sometimes no more than a line, she describes her daily routines in her home workspaces: in the morning she listens to barely audible talk radio as she writes, while the afternoons are for carving and painting.

Working with her hands is a family tradition passed down from her grandfather and father, who died in the recent past – of lung cancer from particles he was exposed to at the sandstone quarry where he worked. Baume has a sense of responsibility for how she spends her time and materials. Concern about waste is at odds with a drive for perfection: she discarded her first 100 plaster birds before she was happy with the series used to illustrate this volume. Snippets of craft theory, family memories, and trivia about bird migration and behaviour are interspersed with musings on what she makes. The joy of holding a physical object in the hand somehow outweighs that of having committed virtual words to a hard drive.

Despite the occasional lovely line, this scattered set of reflections doesn’t hang together. The bird facts, in particular, feel shoehorned in for symbolism, as in Colum McCann’s Apeirogon. It’s a shame, as from the blurb I thought this book couldn’t be better suited to my tastes. Ultimately, as with Spill, Baume’s prose doesn’t spark much for me.

“Most of the time spent making is spent, in fact, in the approach.”

“I must stop once the boredom becomes intolerable, knowing that if I plunge on past this point I will risk arriving at resentment”

“What we all shared – me, my dad, his dad – was a suspicion of modern life, a loathing of fashion, a disappointment with the new technologies and a preference for the ad hoc contraptions of the past”

With thanks to Tramp Press and FMcM Associates for the free copy for review. handiwork is on the Rathbones Folio Prize shortlist.

Eat or We Both Starve by Victoria Kennefick (2021)

This audacious debut collection of fleshly poems is the best I’ve come across so far this year. The body is presented as a battleground: for the brain cancer that takes the poet’s father; for disordered eating that entwines with mummy issues; for the restructuring of pregnancy. Families break apart and fuse into new formations. Cannibalism and famine metaphors dredge up emotional states and religious doctrines.

Where did I start?

Yes, with the heart, enlarged,

its chambers stretched through caring.

Oh is it in defiance or defeat, I don’t know,

The size of my fist, I love it.

(from the opening poem, “Learning to Eat My Mother, where My Mother Is the Teacher”)

Meat avoidance goes beyond principled vegetarianism to become a phobia. Like the female saints, the speaker will deny herself until she achieves spiritual enlightenment.

The therapist taps my shoulders, my head, my knees,

tells me I was a nun once, very strict.

This makes sense; I know how cleanly I like

The title phrase comes from “Open Your Mouth,” in which the god Krishna, as a toddler, nourishes his mother with clay. A child feeding its mother reverses the expected situation, which is described in one of the book’s most striking poems, “Researching the Irish Famine.” The site of an old workhouse divulges buried horrors: “Mothers exhausted their own bodies / to produce milk. […] The starving / human / literally / consumes / itself.”

Corpses and meals; body odour and graves. There’s a pleasingly morbid cast to this collection, but it also has its lighter moments: the sexy “Paris Syndrome,” the low-stakes anxiety over pleasing one’s mother in “Guest Room,” and the playful closer, “Prayer to Audrey Hepburn” (“O Blessed Audrey of the feline eye-flick, jutting / bones, slim-hipped androgyny of war-time rationing”). Rich with imagery and alliteration, this is just my kind of poetry. Verse readalikes would include The Air Year by Caroline Bird, Flèche by Mary Jean Chan, and Tongues of Fire by Seán Hewitt, while in prose I was also reminded of Milk Fed by Melissa Broder (review coming soon) and Sanatorium by Abi Palmer.

With thanks to Carcanet Press for the free copy for review. This comes out on the 25th.

A Ghost in the Throat by Doireann Ní Ghríofa (2020)

“This is a female text.” In an elegant loop, Ní Ghríofa begins and ends with this line, and uses it as a refrain throughout. What is the text? It is this book, yes, as well as the 18th-century Irish-language poem that becomes an obsession for the author/narrator, “The Keen for Art Ó Laoghaire” by Eibhlín Dubh Ní Chonaill; however, it is also the female body, its milk and blood just as significant for storytelling as any ink.

Because the protagonist’s name is the same as the author’s, I took her experiences at face value. As the narrative opens in 2012, Ní Ghríofa and her husband have three young sons and life for her is a list of repetitive household tasks that must be completed each day. She donates pumped breast milk for premature babies as a karmic contribution to the universe: something she can control when so much around her she feels she can’t, like frequent evictions and another pregnancy. Reading Eibhlín Dubh’s lament for her murdered husband, contemplating a new translation of it, and recreating her life from paltry archival fragments: these tasks broaden her life and give an intellectual component to complement the bodily one.

My weeks are decanted between the twin forces of milk and text, weeks that soon pour into months, and then into years. I make myself a life in which whenever I let myself sit, it is to emit pale syllables of milk, while sipping my own dark sustenance from ink. […] I skitter through chaotic mornings of laundry and lunchboxes and immunisations, always anticipating my next session at the breast-pump, because this is as close as I get to a rest. To sit and read while bound to my insatiable machine is to leave my lists behind and stroll instead through doors opened by Eibhlín Dubh.

Ní Ghríofa remembers other times in her life in an impressionistic stream: starting a premed course at university, bad behaviour that culminated in suicidal ideation, a near-collision on a highway, her daughter’s birth by emergency C-section, finally buying a house and making it a home by adopting a stray kitten and planting a bee-friendly garden. You can tell from the precision of her words that Ní Ghríofa started off as a poet, and I loved how she writes about her own life. I had little interest in Eibhlín Dubh’s story, but maybe it’s enough for her to be an example of women “cast once more in the periphery of men’s lives.” It’s a book about women’s labour – physical and emotional – and the traces of it that remain. I recommend it alongside I Am, I Am, I Am by Maggie O’Farrell and Mother Ship by Francesca Segal.

With thanks to Tramp Press and FMcM Associates for the free copy for review. A Ghost in the Throat is on the Rathbones Folio Prize shortlist.

The Distance Between Us by Maggie O’Farrell (2004) 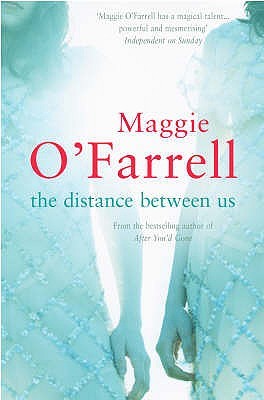 This is the earliest work of O’Farrell’s that I’ve read – it was her third novel, following After You’d Gone and My Lover’s Lover (I finally found those two at a charity shop last year and I’m saving them for a rainy day). It took me a long time to get into this one. It’s delivered in bitty sections that race between characters and situations, not generally in chronological order. It’s not until nearly the halfway point that you get a sense of how it all fits together.

Although there are many secondary characters, the two main strands belong to Jake, a young white filmmaker raised in Hong Kong by a bohemian mother, and Stella, a Scottish-Italian radio broadcaster. When a Chinese New Year celebration turns into a stampede, Jake and his girlfriend narrowly escape disaster and rush into a commitment he’s not ready for. In the meantime, Stella gets spooked by a traumatic flash from her childhood and flees London for a remote Scottish hotel. She’s very close to her older sister, Nina, who was deathly ill as a child (O’Farrell inserts a scene I was familiar with from I Am, I Am, I Am, when she heard a nurse outside her room chiding a noisy visitor, “There’s a little girl dying in there”), but now it’s Nina who will have to convince Stella to take the chance at happiness that life is offering.

In the end, this felt like a rehearsal for This Must Be the Place; it has the myriad settings (e.g., here, Italy, Wales and New Zealand are also mentioned) but not the emotional heft. With a setup like this, you sort of know where things are going, don’t you? Despite Stella’s awful secret, she is as flat a character as Jake. Simple boy-meets-girl story lines don’t hold a lot of appeal for me now, if they ever did. Still, the second half was a great ride.

Also, I’ve tried twice over the past year, but couldn’t get further than page 80 in The Wild Laughter by Caoilinn Hughes (2020), a black comedy about two brothers whose farmer father goes bankrupt and gets a terminal diagnosis. It’s a strangely masculine book (though in some particulars very similar to Scenes of a Graphic Nature) and I found little to latch on to. This was a disappointment as I’d very much enjoyed Hughes’s debut, Orchid & the Wasp, and this second novel is now on the Dylan Thomas Prize longlist.

What have you been picking up for Reading Ireland Month? 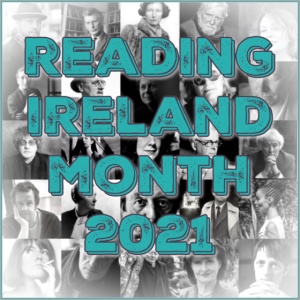