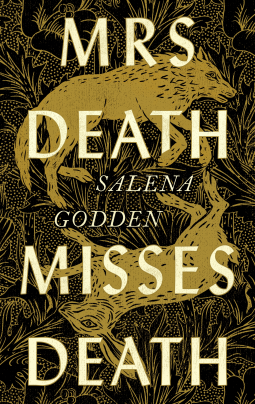 Grief Is the Thing with Feathers meets Girl, Woman, Other would be my marketing shorthand for this one. Poet Salena Godden’s debut novel is a fresh and fizzing work, passionate about exposing injustice but also about celebrating simple joys, and in the end it’s wholly life-affirming despite a narrative stuffed full of deaths real and imagined.

What if Death wasn’t the male Grim Reaper stereotype? What if, instead, she was a poor black woman – a bag lady on a bus, or a hospital cleaner? In this playful and lilting story, we learn of Mrs Death’s work via her unwitting medium, Wolf Willeford, who one Christmas Eve goes walking in London’s Brick Lane area and buys an irresistible desk that reveals flashes of historical deaths. Once Mrs Death’s desk (and resentful at not being a piano), it now transmits her stories to Wolf, giving a whole new meaning to the term ghost writer. Wolf compiles and edits her memoirs, which take the form of diary entries, poems, and songs.

It’s never been more stressful to be Death, what with civil war in Syria, school shootings in the USA, and refugees drowning off the coast of France. But although the book’s frame of reference is up to the minute, wrongful deaths are nothing new, so occasional vignettes dramatize untimely demises – especially of black women – across the centuries: from the days of slavery to Jack the Ripper to police custody a few years ago. There are so many ways to die:

really nearly took that other plane on 9/11

had a coconut fall on your head

saw your village being bombed

slipped taking a selfie by the Grand Canyon

had a fight with an alligator

got stranded in a fierce and fast-moving bushfire

Speaking of fire, and of the title, Wolf (biracial, nonbinary, and possibly bipolar) is here to narrate only because Mrs Death missed one. Their mum died in a house fire. Wolf should have died that day, too, but heard a voice saying “Wake up, Wolf … Can you smell smoke?” Were they spared deliberately, or did Mrs Death make a mistake? (After all, we learn that when a patient briefly wakes up on the operating table before dying for good, it’s because Mrs Death’s printer got jammed.)

Where I think the novel really succeeds is in balancing its two levels: the cosmic, in which Life and Death are sisters and Time is Death’s lover in a sort of creation myth; and the personal, in which Wolf’s family tree, printed at the end, is an appalling litany of accidental deaths and executions. It’s easy to see why Wolf is so traumatized, but Mrs Death, ironically, reminds him that, despite all of the world’s fallen heroes and ongoing crises, there is still such beauty to be found in life.

All the warmth and all the joy is boiled in a soup of memory, we stir the good stuff from the bottom of the pot and hold the ladle up, drink, we say, look at all the good chunks of goodness, take in your share of good times, good music, good books, good food, good laughter, good people, be grateful for the good stuff, life and death, we say, drink.

There were a few spots where I thought the content repetitive and wondered if the miscellany format distracted from the narrative, but overall the book more than lives up to its fantastic cover, title, and premise. And with the pandemic’s global death toll rising daily, it could hardly be more relevant.

Unusual, musical, and a real pleasure to read: this is the first entry on my Best of 2021 shelf.