Each September I make a special effort to read short stories, which otherwise tend to languish on my shelves unread. In 2020 I read eight collections for this challenge. This year I hope to outdo myself. I’m knee-deep in seven more collections at the moment, including a couple from the library and two from my set-aside-temporarily shelf. Here’s my first four.

I’ve long considered Byatt my favourite author, and have read all of her published short story collections before. One I even reread last year. So when approaching this chronological selection of 18 stories, I skipped the couple I’d read recently, even though that includes perhaps my favourite stand-alone story of all time (“Medusa’s Ankles”), plus a few more that I’d read before. This time around, I found I wasn’t as interested in the historical stories in the Angels and Insects or Possession vein – chiefly “Precipice-Encurled,” a long story about Robert Browning from her first collection – and instead focused on stories where fantasy or horror breaks into everyday life, and writerly or metafictional ones.

As David Mitchell notes in his introduction, Byatt’s range, from fairy tales to historical realism, is almost overwhelming; it’s hard to do it justice in a short review, but I’ll highlight five brilliant stories beyond the title one. “The July Ghost,” an early story, is another that has stuck with me over the years, turning up in one of my Six Degrees posts. It’s a straight-up ghost story but also a tale within a tale being recounted by a man at a party, and blends sex and death in a creepy way. “Racine and the Tablecloth” pits a clever boarding school girl and her literature professor against each other in a tacit psychological conflict. “Who won, you will ask, Emily or Miss Crichton-Walker, since the Reader is mythical and detached?” 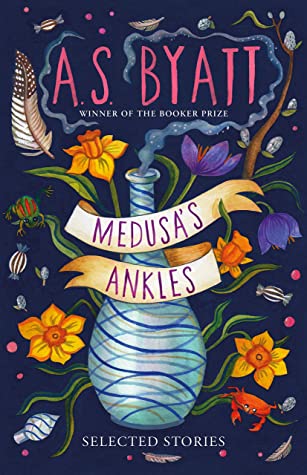 “A Lamia in the Cévennes,” about a seductive snake-spirit living in a painter’s swimming pool, provides a delicious lick of magic. I’m surprised I didn’t remember “Raw Material,” as it was a favourite on this reread. A working-class author teaches his creative writing students to write what they know and avoid melodrama. Yet most of them craft over-the-top graphic tales of torture and revenge. Only an unassuming octogenarian follows his instructions, spinning lovingly meticulous accounts of polishing stoves and washing laundry by hand in the old days. He is captivated by her stories, reading them aloud to an unappreciative class and even entering them into a competition. But the old woman’s life holds a sordid surprise. It’s mind-blowing how Byatt turns all our expectations for this story on their head and forces us to question nostalgia and the therapeutic value of writing fiction.

Five of the late stories were originally printed in other publications and had not previously been collected. Of these, I most liked “Dolls’ Eyes” (2013), which is available as a Comma Singles e-book and was in the anthology The New Uncanny. A schoolteacher who lives in a house full of dolls welcomes a new fellow teacher to be her lodger and trusts her with her love and her dolls, only to be betrayed and call down vengeance. “Sea Story,” which appeared in the Guardian, is a thoroughly depressing closer about the persistence of plastic (but how about that last line?!).

One of the things I most admire about Byatt is her use of colour, and visual detail in general. As Mitchell puts it, “It is not easy to think of another writer with so painterly and exact an eye for the colours, textures and appearances of things. The visual is in constant dialogue with the textual.” Witness in the autobiographical “Sugar” the descriptions of boiled sweets being made almost like blown glass in a grandfather’s factory, or the colourful minerals participating in the metamorphosis in “A Stone Woman.”

If you’re new to Byatt’s work, picking a handful of stories from this collection would be a great way of trying out her style and figuring out which of her full-length books you might like to read. Fans of Margaret Atwood, Julian Barnes and Michèle Roberts are specially invited to the feast. (Public library)

“Such wonder, such amazement, are the opposite, the exact opposite, of boredom, and many people only know them after fear and loss. Once known, I believe, they cannot be completely forgotten; they cast flashes and floods of paradisal light in odd places and at odd times.”

“the world is full of light and life, and the true crime is not to be interested in it. You have a way in. Take it. It may incidentally be a way out, too, as all skills are.”

After that in-depth review, I’ll give just brief responses to the next three slim volumes.

A debut trio of raw stories set in the Yorkshire countryside. In “Offcomers,” the 2001 foot and mouth disease outbreak threatens the happiness of a sheep-farming couple. The effects of rural isolation on a relationship resurface in “Outside Are the Dogs.” In “Cull Yaw,” a vegetarian gets involved with a butcher who’s keen on marketing mutton and ends up helping him with a grisly project. This was the stand-out for me. I appreciated the clear-eyed look at where food comes from. At the same time, narrator Star’s mother is ailing: a reminder that decay is inevitable and we are all naught but flesh and blood. I liked the prose well enough, but found the characterization a bit thin. One for readers of Andrew Michael Hurley and Cynan Jones. (See also Annabel’s review.)

“his mother silently spoons out second helpings of beef lasagne. Outside, the lasagne’s sisters cavort in the paddock.”

This story pamphlet was released by Broken Sleep Books, an indie publisher in Wales, in March. My thanks to Annabel for passing on her review copy.

Okorie emigrated from Nigeria to Ireland in 2005. Her time living in a direct provision hostel for asylum seekers informed the title story about women queuing for and squabbling over food rations, written in an African pidgin. In “Under the Awning,” a Black woman fictionalizes her experiences of racism into a second-person short story her classmates deem too bleak. The Author’s Note reveals that Okorie based this one on comments she herself got in a writers’ group. “The Egg Broke” returns to Nigeria and its old superstition about twins.

Fans of Chimamanda Ngozi Adichie will find a similar voice here, and enough variety to distract from the low page count (the book is padded out with an essay on refugees in Ireland) and so-so writing. (Little Free Library)

Dear George and Other Stories by Helen Simpson (1995) 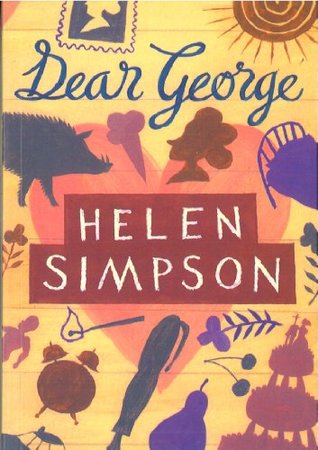 This is the third time Simpson has made it into one of my September features (after Four Bare Legs in a Bed in 2018 and In the Driver’s Seat in 2019); safe to say she’s becoming one of my favourite short story writers. Deciding to have children (or not) looms large. In “When in Rome,” Geraldine is relieved to get her period as her relationship limps to an end. In “Last Orders,” the heavily pregnant protagonist, now 12 days overdue, fears the transformation ahead of her. “To Her Unready Boyfriend,” echoing Andrew Marvell’s “To His Coy Mistress,” has the narrator warn him time runs short for babymaking.

I also liked “Bed and Breakfast,” about a young couple hoping not to turn into their boring parents; “Caput Apri” and its magical twist on the story behind “The Boar’s Head Carol” (a Christmas story or two is a trademark of Simpson’s collections, like the focus on motherhood); and “Heavy Weather,” in which parents of two small children have a manic Dorset holiday that takes in some beloved sites like Hardy’s cottage and marvel at the simultaneous joys and tyranny of childrearing.

The gentle absurdity of “The Immaculate Bridegroom” reminded me of a previous Simpson story in which a woman marries herself, and “Creative Writing” connects back to two of the other collections I’ve featured here with its writers’ workshop setting. (Secondhand purchase from Oxfam Books, Hexham)

“You will not be you any more, her ego told her id. Not only will you have produced somebody else from inside you, someone quite different and separate, but you yourself will change into somebody quite different, overnight – a Mother.”

Are you a short story fan? Read any good ones recently?