The Best Books from the First Half of 2019 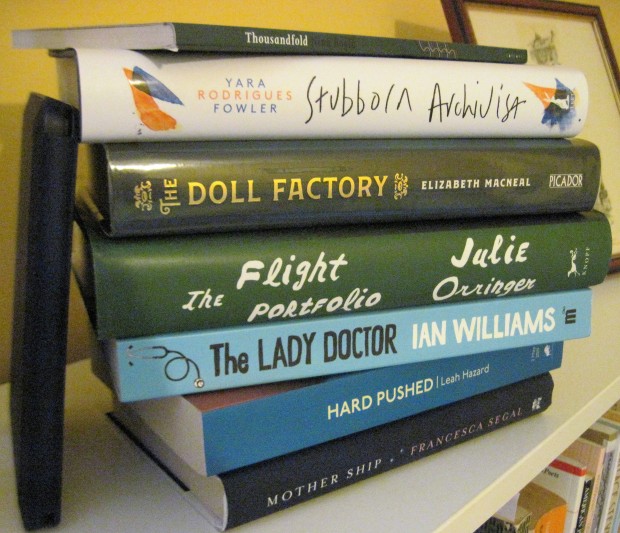 Not pictured: one more book read from the library; the Kindle represents two NetGalley reads.

Stubborn Archivist by Yara Rodrigues Fowler: What a hip, fresh approach to fiction. Broadly speaking, this is autofiction: like the author, the protagonist was born in London to a Brazilian mother and an English father. The book opens with fragmentary, titled pieces that look almost like poems in stanzas. The text feel artless, like a pure stream of memory and experience. Navigating two cultures (and languages), being young and adrift, and sometimes seeing her mother in herself: there’s a lot to sympathize with in the main character.

The Flight Portfolio by Julie Orringer: Every day the Emergency Rescue Committee in Marseille interviews 60 refugees and chooses 10 to recommend to the command center in New York City. Varian and his staff arrange bribes, fake passports, and exit visas to get celebrated Jewish artists and writers out of the country via the Pyrenees or various sea routes. The story of an accidental hero torn between impossible choices is utterly compelling. This is richly detailed historical fiction at its best. My top book of 2019 so far.

Daisy Jones and The Six by Taylor Jenkins Reid: This story of the rise and fall of a Fleetwood Mac-esque band is full of verve and heart, and it’s so clever how Reid delivers it all as an oral history of pieced-together interview fragments, creating authentic voices and requiring almost no footnotes or authorial interventions. It’s pure California sex, drugs, and rock ’n roll, but there’s nothing clichéd about it. Instead, you get timeless rivalry, resentment, and unrequited or forbidden love; the clash of personalities and the fleeting nature of fame.

Things in Jars by Jess Kidd: In the autumn of 1863 Bridie Devine, female detective extraordinaire, is tasked with finding the six-year-old daughter of a baronet. Kidd paints a convincingly stark picture of Dickensian London, focusing on an underworld of criminals and circus freaks. Surgery before and after anesthesia and mythology (mermaids and selkies) are intriguing subplots woven through. Kidd’s prose is spry and amusing, particularly in her compact descriptions of people but also in more expansive musings on the dirty, bustling city.

The Doll Factory by Elizabeth Macneal: Iris Whittle dreams of escaping Mrs Salter’s Doll Emporium and becoming a real painter. Set in the early 1850s and focusing on the Great Exhibition and Pre-Raphaelite Brotherhood, this also reveals the everyday world of poor Londoners. It’s a sumptuous and believable fictional world, with touches of gritty realism. If some characters seem to fit neatly into stereotypes (fallen woman, rake, etc.), be assured that Macneal is interested in nuances. A terrific debut full of panache and promise.

The Lady Doctor by Ian Williams: Dr. Lois Pritchard works at a medical practice in small-town Wales and puts in two days a week treating embarrassing ailments at the local hospital’s genitourinary medicine clinic. The tone is wonderfully balanced: there are plenty of hilarious, somewhat raunchy scenes, but also a lot of heartfelt moments as Lois learns that a doctor is never completely off duty and you have no idea what medical or personal challenge will crop up next. The drawing style reminds me of Alison Bechdel’s.

Constellations by Sinéad Gleeson: Perfect for fans of I Am, I Am, I Am by Maggie O’Farrell, this is a set of trenchant autobiographical essays about being in a female body, especially one wracked by pain. Gleeson ranges from the seemingly trivial to life-and-death matters as she writes about hairstyles, blood types, pregnancy, the abortion debate in Ireland and having a rare type of leukemia. The book feels timely and is inventive in how it brings together disparate topics to explore the possibilities and limitations of women’s bodies.

Hard Pushed: A Midwife’s Story by Leah Hazard: An empathetic picture of patients’ plights and medical professionals’ burnout. Visceral details of sights, smells and feelings put you right there in the delivery room. Excerpts from a midwife’s official notes – in italics and full of shorthand and jargon – are a neat window into the science and reality of the work. This is a heartfelt read as well as a vivid and pacey one, and it’s alternately funny and sobering. If you like books that follow doctors and nurses down hospital hallways, you’ll love it.

Mother Ship by Francesca Segal: A visceral diary of the first eight weeks in the lives of her daughters, who were born by Caesarean section at 29 weeks in October 2015 and spent the next two months in the NICU. As well as portraying her own state of mind, Segal crafts twinkly pen portraits of the others she encountered in the NICU, including the staff but especially her fellow preemie mums. Female friendship is thus a subsidiary theme in this exploration of desperate love and helplessness.

Thousandfold by Nina Bogin: This is a lovely collection whose poems devote equal time to interactions with nature and encounters with friends and family. Birds – along with their eggs and feathers – are a frequent presence. Often a particular object will serve as a totem as the poet remembers the most important people in her life. Elsewhere Bogin greets a new granddaughter and gives thanks for the comforting presence of her cat. Gentle rhymes and half-rhymes lend a playful or incantatory nature. I recommend it to fans of Linda Pastan.

The three 4.5- or 5-star books that I read this year (and haven’t yet written about on here) that were not published in 2019 are:

Girls Are Coming Out of the Woods by Tishani Doshi [poetry]

Faces in the Water by Janet Frame

Priestdaddy: A Memoir by Patricia Lockwood

What 2019 releases do I need to catch up on right away?