The Language of Kindness: A Nurse’s Story by Christie Watson

After all that Wellcome Book Prize reading, I’ve given myself a break from the medical reads, right? No way! I’m already eagerly looking out for hopefuls for next year’s prize – I’ve amassed quite a nice little pile – and this is a particularly strong candidate, based on the 20 years that Watson spent as a nurse in England’s health system before leaving to write full-time. (Her debut, Tiny Sunbirds Far Away, won the Costa First Novel Award in 2011; she followed it up with Where Women Are Kings in 2013.) It taps into the widespread feeling that medicine is in desperate need of a good dose of compassion, and will ring true for anyone who spends time in hospitals, whether as a patient or a carer. 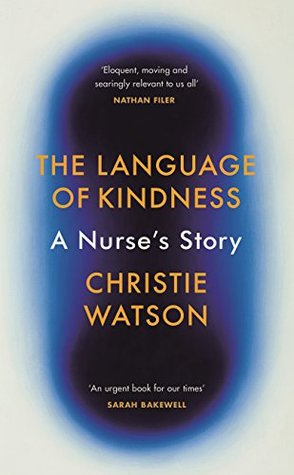 Watson presents her book as a roughly chronological tour through the stages of nursing – from pediatrics through to elderly care and the tending to dead bodies – but also through her own career, as she grows from a seventeen-year-old trainee who’s squeamish about blood to a broadly experienced nurse who can hardly be fazed by anything. The first chapter is set up like a tour of the hospital, describing everything she sees and hears as she makes her way up to her office, and the final chapter takes place on her very last day as a nurse, when, faced with a laboring mother in a taxi, she has to deliver the baby right there in the carpark.

In between we hear a series of vivid stories that veer between heartwarming and desperately sad. Watson sees children given a second shot at life. Aaron gets a heart–lung transplant to treat his cystic fibrosis and two-year-old Charlotte bounces back from sepsis – though with prosthetic limbs. But she also sees the ones who won’t get better: Tia, a little girl with a brain tumor; Mahesh, who has muscular dystrophy and relies on a breathing tube; and Jasmin, who is brought to the hospital after a house fire but doesn’t survive for long. She dies in the nurses’ arms as they’re washing the smoke smell out of her hair.

Although Watson specialized in children’s intensive care nursing, she trained in all branches of nursing, so we follow her into the delivery room, mental health ward, and operating theatre. As in Maggie O’Farrell’s I Am, I Am, I Am, we learn about her links to hospitals over the years, starting with her memories of being nursed as a child. She met her former partner, a consultant, at the hospital; they had a child together and adopted another before splitting 12 years later. And as her father was dying of lung cancer, she developed a new appreciation for what nurses do as she observed the dedicated care he received from his hospice nurse. She characterizes nursing as a career that requires great energy, skill and emotional intelligence, “that demands a chunk of your soul on a daily basis,” yet is all too often undervalued.

For me the weakest sections of Watson’s book are the snippets of history about hospitals and the development of the theory and philosophy of nursing. These insertions feel a little awkward and break up the flow of personal disclosure. The same applies to the occasional parenthetical phrase that seems to talk down to the reader, such as “women now receive medical help (IVF) to have their babies” and “obstetricians (doctors) run the show.” Footnotes or endnotes connected to a short glossary might have been a less obtrusive way of adding such explanatory information.

I would particularly recommend this memoir to readers of Kathryn Mannix’s With the End in Mind and Henry Marsh’s Admissions. But with its message of empathy for suffering and vulnerable humanity, it’s a book that anyone and everyone should read. I have it on good authority that there has recently been a copy on the desk of Jeremy Hunt, Health Secretary of the UK, which seems like an awfully good start.

“I wanted to live many lives, to experience different ways of living. I didn’t know then that I would find exactly what I searched for: that both nursing and writing are about stepping into other shoes all the time.”

“What I thought nursing involved when I started: chemistry, biology, physics, pharmacology and anatomy. And what I now know to be the truth of nursing: philosophy, psychology, art, ethics and politics.”

“You get used to all sorts of smells, as a nurse. [An amazingly graphic passage!] But for all that I’ve seen and touched and smelled, and as difficult as it is at the time, there is a patient at the centre of it, afraid and embarrassed. … The horror of our bodies – our humanity, our flesh and blood – is something nurses must bear, lest the patient think too deeply, remember the lack of dignity that makes us all vulnerable. It is our vulnerability that unites us. Promoting dignity in the face of illness is one of the best gifts a nurse can give.”

The Language of Kindness was published in the UK on May 3rd by Chatto & Windus. My thanks to the publisher for the free review copy. It is released today, May 8th, by Doubleday Canada and Tim Duggan Books in the States.