Recapping the Not the Wellcome Prize Blog Tour Reviews

It’s hard to believe the Not the Wellcome Prize blog tour is over already! It has been a good two weeks of showcasing some of the best medicine- and health-themed books published in 2019. We had some kind messages of thanks from the authors, and good engagement on Twitter, including from publishers and employees of the Wellcome Trust. Thanks to the bloggers involved in the tour, and others who have helped us with comments and retweets.

This weekend we as the shadow panel (Annabel of Annabookbel, Clare of A Little Blog of Books, Laura of Dr. Laura Tisdall, Paul of Halfman, Halfbook and I) have the tough job of choosing a shortlist of six books, which we will announce on Monday morning. I plan to set up a Twitter poll to run all through next week. The shadow panel members will vote to choose a winner, with the results of the Twitter poll serving as one additional vote. The winner will be announced a week later, on Monday the 11th. 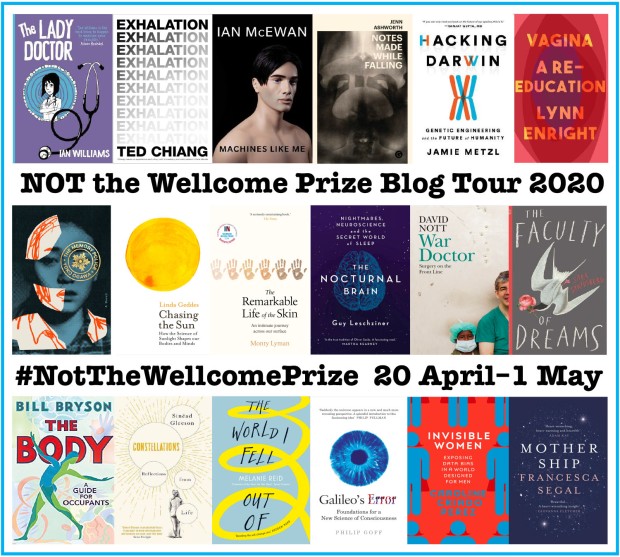 First, here’s a recap of the 19 terrific books we’ve featured, in chronological blog tour order. In fiction we’ve got: novels about child development, memory loss, and disturbed mental states; science fiction about AI and human identity; and a graphic novel set at a small-town medical practice. In nonfiction the topics included: anatomy, cancer, chronic pain, circadian rhythms, consciousness, disability, gender inequality, genetic engineering, premature birth, sleep, and surgery in war zones. I’ve also appended positive review coverage I’ve come across elsewhere, and noted any other awards these books have won or been nominated for. (And see this post for a reminder of the other 56 books we considered this year through our mega-longlist.)

Notes Made While Falling by Jenn Ashworth & The Remarkable Life of the Skin by Monty Lyman: Simon’s reviews

[Bookish Beck review of the Ashworth]

[Halfman, Halfbook review of the Lyman]

*Sinéad Gleeson was shortlisted for the 2020 Rathbones Folio Prize.

[Rebecca’s Goodreads review of the Gleeson]

[Kate Vane’s review of the Gleeson]

[Lonesome Reader review of the Gleeson]

[A Little Blog of Books review of the Segal]

[Annabookbel review of the Williams]

[Bookish Beck review of the Geddes]

The Faculty of Dreams by Sara Stridsberg: Kate’s review

*Yoko Ogawa is shortlisted for this year’s International Booker Prize.

[Lonesome Reader review of the Ogawa]

The Body by Bill Bryson & The World I Fell Out Of by Melanie Reid: Clare’s reviews

[Bookish Beck review of the Bryson]

[Rebecca’s Goodreads review of the Reid]

And there we have it: the Not the Wellcome Prize longlist. I hope you’ve enjoyed following along with the reviews. Look out for the shortlist, and your chance to vote for the winner, here and via Twitter on Monday. 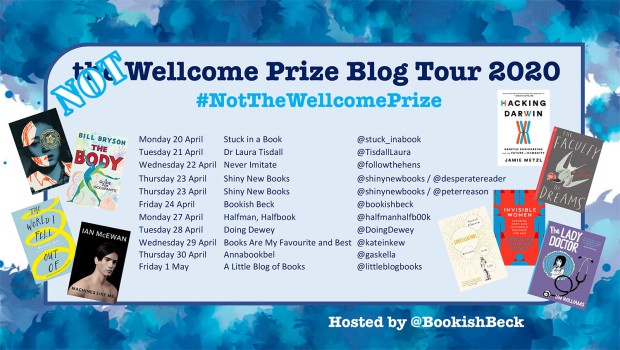 Which book(s) are you rooting for?