Today, March 9th, is World Kidney Day. “The kidneys are like the Rodney Dangerfield of vital organs—they get no popular respect,” Vanessa Grubbs (whose memoir I discuss below) wryly comments. Chances are you rarely have occasion to think about your kidneys. But I’m honoring them with a reading list because several years ago I was diagnosed with polycystic kidney disease, a degenerative condition that runs in my family. My maternal grandmother had it – we’ve never definitively traced it further back than her – and four of her six children have it, too. (If you took a high school genetics class, you might remember that with an autosomal dominant condition offspring have a 50% chance of inheriting the gene for the disease.) A few cousins of my generation also have PKD, and starting with my mom we’ve had a few successful kidney transplants in the family so far. 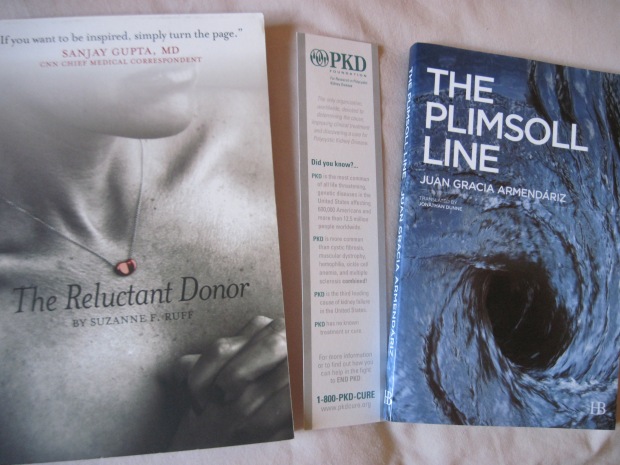 I must mention the excellent work done by the PKD Foundation in the States and the PKD Charity here in the UK. Both are a great support and source of information for me and my wider family.

As soon as I read Melissa’s review at The Book Binder’s Daughter, I knew I had to get this one. “The Plimsoll line” is a maritime term indicating how low a cargo-laden ship can sit in the water without sinking; here it’s used metaphorically to ask just how much one man can take. Gabriel Ariz is a 52-year-old art professor who lives not far from the city yet surrounded by oak woods. He’s divorced from Ana, who’s pressuring him to sell the house, and their young adult daughter Laura died a few years ago in a car accident. Now this pack-a-day smoker who gets drunk with his brother, traveling photographer Óscar, learns that he has end-stage renal disease and his life will have to change. On indefinite leave from work, he attends a dialysis clinic several times a week and joins the organ transplant list.

At times this was a bit overwritten for my tastes – some paragraphs stretch to several pages, and I’ve had to look up words, including “lentitude” and “logomachy” – but I did love the author’s trick of jumping into different perspectives. On multiple occasions he employs an “anonymous observer,” and in various chapters the point-of-view shifts to a member of the animal kingdom: Polanski the cat, a black kite flying overhead, a mole popping up in the garden, or a beetle winging across the detritus of Gabriel’s untidy household. We also get an extended section from Laura’s journals that reveals a disturbing family secret.

This is not one for the squeamish as it gives an unflinching account of dialysis: “His forearm throbbed, lacerated by needle marks. Sara had taken a while to find the fistula, and now the pain spread under the surgical tape like a jellyfish sting.” But for every passage that makes you cringe there’s a beautiful one that captures things perfectly: “he is living in constant deferment, between parentheses” and “If the succubus of his bad dreams were to say to him, ‘Make a wish,’ he would ask to be able to mold himself to the geological quietude of stones.”

The Plimsoll Line won Spain’s Premio Tiflos de Novela in 2008 and first appeared in English translation in 2015. It is part of a “Trilogy of Illness”; I presume the other volumes are not yet available in English, though I’ve enquired of the translator, Jonathan Dunne, via a Facebook message just in case. Forget Ferrante and Knausgaard; this is the semi-autobiographical series I’ll be awaiting the next installment of with bated breath.

Grubbs is a nephrologist and assistant professor of medicine at San Francisco General Hospital. Well before she made the kidneys her clinical area of expertise, a personal encounter made them special to her. In 2003 she met Robert Phillips when she was an attending trying to get support for her Office of Diversity Affairs; he was a hospital trustee. She only later learned, after they started dating, that due to FSGS his kidneys had failed in his twenties and he’d been on dialysis for years. In 2005 she donated him one of her kidneys. Robert’s health was touch-and-go for a little while there, but he proposed to her soon afterwards. I read about a third of this and then skimmed the rest because I wasn’t all that interested in their separate histories. However, I did like the context Grubbs gives, such as a brief history of dialysis, nephrology case studies, and a great set of FAQs. She also notes that minorities are less likely to get organ transplants, a disparity she is working to rectify.

This memoir grew out of an essay for Health Affairs, “Good for Harvest, Bad for Planting.” Releases June 13th. 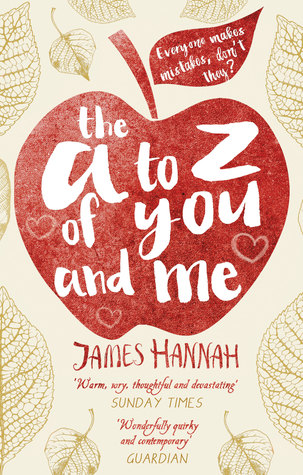 (First reviewed in November 2015; here’s a shortened version.) Lying in a hospice bed, 40-year-old Ivo looks back on his life. Even after just four short decades and a modest career at a garden center, he has plenty to regret. Hard partying and drug use exacerbated his diabetes and prompted kidney failure. His lifestyle also led indirectly to his girlfriend, nursing student Mia (the “you” he often addresses directly), leaving him. He’s estranged from his sister and his friends from school days, especially Mal. How did he mess up so badly and cut himself off so completely that he’s now dying alone? And how much can he put right before he goes?

There’s plenty of affecting writing in Hannah’s debut novel. I liked how he captures the routines of institutional life. Nurse Sheila’s A to Z game, encouraging Ivo to think of a memory attached to body parts starting with each letter of the alphabet, provides a hokey but effective structure. Keeping in mind that in British English Z is pronounced ‘zed’, the title doesn’t rhyme, but this is still somewhat sappy. I’d recommend it to fans of Mark Haddon and David Nicholls. I’ll follow Hannah’s career and hope he avoids melodrama and a contrived setup – the two near-pitfalls of this one – in the future.

A sepia-toned photograph at the centerfold tells a solemn tale: six of these eight members of Ruff’s Irish-Catholic Chicago family died, directly or indirectly, as a result of PKD. I’ve always known there’s a long waiting list for transplant kidneys, but I was surprised to learn that dialysis machines used to be rare; demand far exceeded supply, and the procedure was not covered by Medicare until 1973. Ruff’s aunt, Sister Mike, decided the lives of people with children were more important than her own, so didn’t press for dialysis; when her kidneys failed in her forties, death followed just a few months later.

Things had greatly improved by the time Ruff’s mother needed a transplant. Joan sounds like a feisty, lovable character, with plenty of good advice on being a patient: fight for your rights (the meek ones often end up being carried out feet first), get up and walk as soon after surgery as you possibly can, and appreciate the joy of an entirely ordinary day. Ruff’s parents had her and her sisters tested for PKD when they were teenagers. Having gone to the trouble, they then lied about the results! They said no one had PKD, but in the end two out of three did; only Ruff was spared. This is how she ended up donating a kidney to her younger sister, JoAnn. The more interesting sections of the book are about Ruff’s family history; her internal struggle to convince herself to commit to organ donation makes for pretty repetitive moaning. 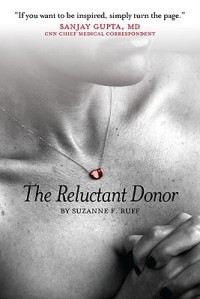 In general, the writing isn’t great. Skimming through, I found a page with 16 of my proofreading marks; on most pages it’s more like 2–3. There’s also a tendency to over-write when portraying emotion: “Genetic disease. Those two words made my spine shiver, my ears ring, my throat close, and my heart pound; I became lightheaded and faint. Terror crept into my core and gripped me in its vice [sic].” While I’m not sure I could recommend this to someone who doesn’t have a personal stake in organ donation, for those who are interested in an autobiographical account of genetic disease/transplant surgery, it’s a quick, pleasant read.

Plus two more kidney-themed novels I’m on the look-out for:

I’m on the fence about: