Sigh. It keeps happening. A book that looks unmissable ends up disappointing me and I abandon it partway through. Here’s six I dropped recently: two from the library, two e-copies I was meant to review but found I couldn’t recommend, and two that couldn’t hold my interest on our European holiday. Below I give brief write-ups of the abandonees. As always, I’d be interested to hear if you’ve read any of them and thought they were worth persisting with. 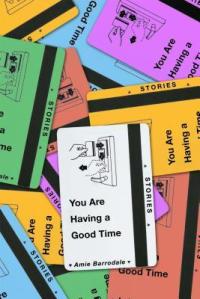 You Are Having a Good Time: Stories by Amie Barrodale

I only managed the first two stories. Barrodale writes in a flat, affectless style full of unconnected sentences; her themes are of Hollywood and the emptiness of modern life. This reminded me most of Miranda July, so if you’re a big fan of hers I’d say go for it. Otherwise, don’t bother. [Read the first 21%.]

These gently magical short stories equate parenthood with peril: a child is always somehow lost or on the verge of being lost. “Just in Case” is wonderfully macabre, and I was glad to discover how A Song for Issy Bradley got its start (with “Scaling never”). The fragility of memory is another theme, with one story narrated by a woman with dementia. The title story has a Hansel and Gretel fairytale feel to it. I enjoyed the first half well enough, but didn’t feel compelled to continue; I definitely prefer Bray’s full-length work, and this needed to go back to the library anyway. [Read the first 96 pages out of 178.] 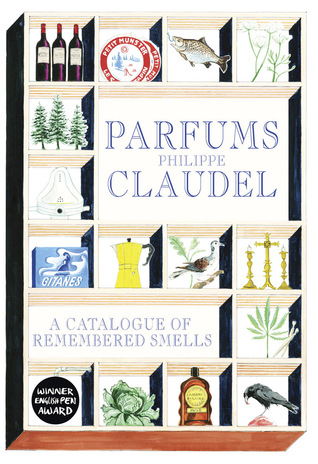 Parfums: A Catalogue of Remembered Smells by Philippe Claudel

[translated from the French by Euan Cameron]

I loved the idea behind this: a memoir in the form of short essays built around scent memories. Cinnamon brings the Christmas season to mind, aftershave reminds him of his father, and garlic and cannabis dredge up different aspects of his growing-up years. There’s some beautifully poetic language here. A favorite line was “The child that I am is allowed to breathe in these smells of dead pollen, widowed woolens and orphaned linen so that one day he can piece them together into a narrative and resurrect lives lost through wars, illnesses and accidents.” But ultimately I got a bit tired of more of the same. Perhaps if I’d kept it as a bedside book and just read a few pieces at a time instead of attempting to read it straight through, it would have worked better for me. [Read the first 86 pages out of 173.]

Three generations of black women – Cassie, Lil Ma and Grandmother – live on Negro Street above the laundry where they work in Heron-Neck, Mississippi. Cassie learns that her father is a white man, William Forrest, whose daughter Judith is near her age. They know they’re sisters and when they hear their worthless pater has received an inheritance they concoct a scheme to go get their nest egg. Alas, the Southern dialect feels false to me, and I wasn’t taken with any of the characters. (Great piece of trivia: Feldman used to write science fiction under the pen name “Severna Park,” which is a town in Maryland.) [Read the first 18%.]

The Hemingway Thief by Shaun Harris

I thought this would be a fun, light-hearted literary mystery to read on European trains. Henry Cooper, a writer of vampire romances, takes a sabbatical to Mexico to figure out what he really wants to do. Here he unexpectedly wanders into intrigue when a Hemingway manuscript turns up in a small-time criminal’s hotel room. I never warmed to the uninspired hardboiled-lite style and it took far too long for the story to get going. [Read the first 17%.]

This was Irving’s debut, and although you can see seeds of the Dickensian characterization at which he excels in his best work, it was just not good overall. Neither Siggy nor Graff held my interest, and the dialogue feels stiff and unrealistic. There’s also some downright strange wording: “I could peek how the helmet nearly covered her eyes”; “the rain still puddled the courtyard”; “When his spongy ribs whomped the cobbles, the horse said, ‘Gnif!’” I couldn’t decide if this was Irving trying to show that the story is set abroad or if it was just evidence of bad writing. My husband is enough of an Irving fan to have gobbled the book up by the time we reached Austria, but I decided it wasn’t going to get much better. That’s a shame, as I would have liked to get to them, you know, actually setting free the bears at the Vienna Zoo. [Read the first 75 pages out of 384.]