I Found My Tribe by Ruth Fitzmaurice

Ruth Fitzmaurice’s husband, a filmmaker named Simon, was diagnosed with motor neurone disease in 2008. Like Stephen Hawking, he is wheelchair-bound and motionless, communicating only through the mechanical voice of an eye gaze computer.

My husband is a wonder to me but he is hard to find. I search for him in our home. He breathes through a pipe in his throat. He feels everything but cannot move a muscle. I lie on his chest counting mechanical breaths. I hold his hand but he doesn’t hold back. His darting eyes are the only windows left. I won’t stop searching.

Between their five children under the age of 10 (including twins conceived after Simon’s diagnosis), an aggressive basset hound, and Simon’s army of nurses coming and going 24 hours a day, this is one chaotic household. The recurring challenge is to find pockets of stillness – daydreaming, staring at trees outside her window – and to learn what things can bring her back from the brink of despair, again and again.

Often these are outdoor experiences: a last hurrah of a six-month holiday in Australia, running, and especially plunging into the Irish Sea with her “Tragic Wives’ Swimming Club” – a group that includes her friend Michelle, whose husband is also in a wheelchair after a motorbike crash, and her favorite of Simon’s nurses, Marian, who has a serious car accident.

Rather than a straight chronological narrative, this is a set of brief thematic essays with titles like “Dancing,” “Fear,” “Twins” and “Holidays.” Fitzmaurice’s story is one you piece together through vivid vignettes from her home life. Her prose is generally composed of short, simple phrases; as with Cathy Rentzenbrink’s The Last Act of Love, you can tell there is deep emotion pulsing under the measured sentences. With such huge questions in play – How much can one person take? What would losing one’s mind look like? – there’s no need for added drama, after all. Instead, the author turns to whimsy, toying with the superhero cliché for caregivers and wondering what magic might be at work in her situation.

I was particularly impressed by how Fitzmaurice holds the past and present in her mind, and by how she uses an outsider’s perspective to imagine herself out of her circumstances. At times she uses the third person for these visions of herself as a younger woman newly in love:

The young wife at her kitchen table knows about deep magic. But I know her future. Life is going to push and pull her like a wave. She doesn’t have a choice and neither do I. Come with me, dear girl, sit at my tablecloth. The journey is upon us and to survive it, you can’t just ride the wave, you have to become one. Can we do this? Let’s go. Becoming a wave just might be the deepest magic of them all.

There are so many poignant moments in this book: memories of their determinedly vegetarian wedding; pulling out all the stops for Simon’s fortieth birthday with customized art installations to brighten his view; leaving the marital bed – now a “hospital contraption” – after six years of MND being a part of their lives; a full moon swim with the Tragic Wives on her and Simon’s anniversary. But all the quiet, everyday stuff has power too, especially her interactions with her precocious children, who are confused about why Dadda is like this.

If I had one tiny complaint, it’s that Simon feels like something of a shadowy figure. In flashbacks we get a real sense of his forceful personality, but this new, silent Simon in the wheelchair is a mystery. Only once or twice does she record words he ‘says’ to her via his computer. Perhaps this is inevitable given how locked into himself he’s become. However, he was still capable of becoming the first person with MND to direct a feature film, on location in County Wicklow (My Name Is Emily). He has told his own story elsewhere; in his wife’s telling, their ventures now seem so separate that they rarely appear as equal partners.

It’s my tenth wedding anniversary tomorrow; as I was reading this I kept thinking that, for as much as I complain (to myself) about how hard marriage is, I’ve had it so easy. The stresses a couple face when caregiving of one partner is involved are immense. Fitzmaurice has found herself part of a tribe she probably never wanted to join: the walking wounded, with pain behind their eyes and worry never far from their minds. But in the midst of it she’s also found the band of family and friends who help her pull through each time. Her lovely book – wry, wise, and realistic – will strike a chord with anyone who has faced illness and family tragedy.

I Found My Tribe is published in the UK today, July 6th, by Chatto & Windus. My thanks to the publisher for the review copy.

Note: Fitzmaurice got her book deal on the strength of a series of pieces she wrote for the Irish Times. You can read an extract from the book here. Film rights to her story have been sold to Element Pictures; more details are here. A documentary about Simon’s life, It’s Not Yet Dark, based on his memoir of the same title, has recently been released. For more information see here (this article also showcases multiple family photos).

In Cambridge for “Nature Matters”

We spent a few days last week in Cambridge, England for New Networks for Nature’s interdisciplinary “Nature Matters” conference, this year on the theme of “In Touch with the Wild.” This is the fourth year my husband (a biologist with the University of Reading) has participated, and the third year in a row that I’ve attended for a day. While other years the gathering has been in the small town of Stamford, this year’s temporary move to Cambridge gave us the impetus to finally explore this world-famous city for the first time.

Arriving later than we meant to on a Thursday evening, checking into our noisy hostel and then having to dash out in time for my husband to make the first event (and making a futile attempt to find an open coffee shop where I could while away a couple hours)…this all meant our first impression of the city was not great. However, cheap, terrific Chinese street food on Friday after the conference, followed by a delicious glass of cider in a pub and a sunny day for exploring the bustling city center on Saturday created a more favorable overall feeling. 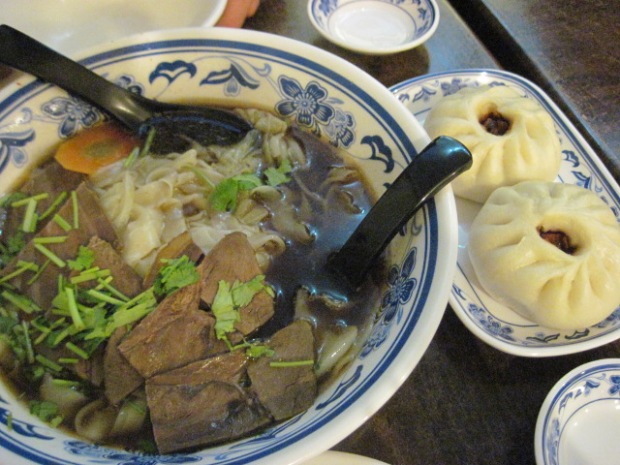 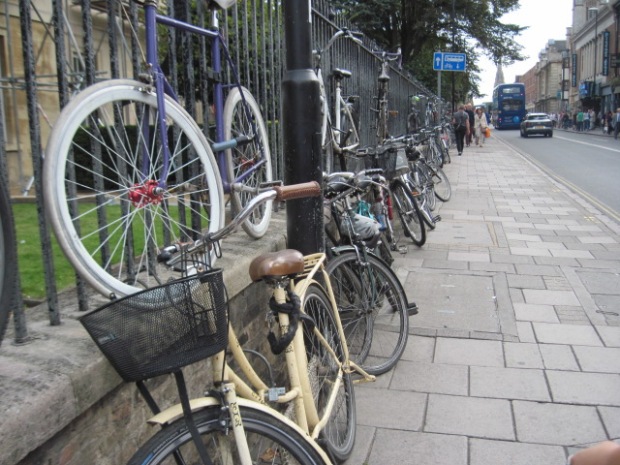 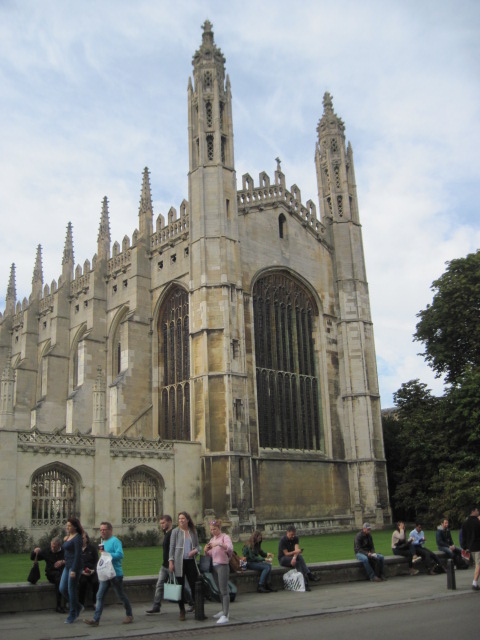 The Church of the Holy Sepulchre, aka The Round Church.

Last year’s conference highlights for me were a debate about nature’s economic value and a panel on the purpose of nature poetry. This year’s sessions tackled personal connection with nature, rewilding (setting aside tracts of land for wilderness and reintroducing native species that have been driven out or gone locally extinct, such as wolves and wild boar), and coping with a sense of loss. With everyone from geographers to a singer and a painter involved on the day I attended, the conference succeeded in drawing in different fields from the sciences and the arts to provide commentary on ways we might reconnect with nature.

The day’s first event brought together author William Fiennes, poet Alison Brackenbury, and Cambridge psychologist Laurie Parma. Fiennes spoke about writing an introduction to John Fowles’s long, curmudgeonly essay The Tree. Whereas Fowles denigrates Linnaeus, Fiennes thinks of him as a hero; like Adam in the Bible, Linnaeus knew the value of naming things. “In order to care about something, we first have to notice it,” Fiennes insisted; for him the noticing began when he was a child going round the garden with his father and learning plant names. Rather than thinking of names as a control mechanism, he suggested they can be a first step in “granting [a species] a place in your sensorium.” 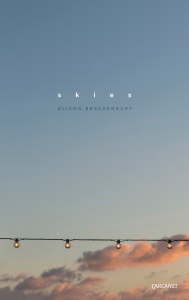 Brackenbury, who comes from four generations of Lincolnshire shepherds, recited from memory seven poems from her latest collection, Skies, several of which reflect on species’ extinctions or comebacks. “Look at them well before they go” is the broadly applicable piece of advice that closes “The Elms.” I especially liked one poem about a starling’s many songs.

Parma relayed the scientific evidence for green spaces mitigating stress and promoting happiness. At an event like this there’s an inevitable feeling that the speakers are preaching to the choir: we already know the personal value of time in nature, as well as the scale of environmental degradation. Still, this came home afresh in the following session as Dr. Stuart Butchart of BirdLife International spoke about the situation in Hawaii, where deforestation, non-native mosquitoes and other invasive animals are rapidly driving native birds to extinction. Photojournalist Toby Smith then questioned whether the nature photographer’s role should be to chronicle nature’s degradation or to celebrate what’s left. Many speakers acknowledged the difficult balance between mourning losses and applauding successes.

I spent most of Saturday scouring Cambridge’s charity shops and made out like a bandit, coming away with 15 books for £15.39. If you happen to find yourself in Cambridge and have seen all you need to of the colleges and the river (it doesn’t take very long), I can recommend Burleigh Street for charity shops but also Mill Road, a slightly more off-the-beaten-path student area of ethnic eateries and cheap stores. Books for Amnesty has an incredible selection; I took advantage of a couple James Lasdun books from their £1 poetry shelf. Best of all was the Salvation Army store, where all books were either 40 or 70 pence. I amassed a huge pile and then put half of it back when I remembered I would have to carry these books the mile or so back into town and then haul them around the whole rest of the day. I also did well at RSPCA’s two shops, one a dedicated bookshop on Mill Road.

Cambridge is certainly rich in secondhand book buying opportunities. Other shops I browsed but didn’t buy from included G. David Books and the tiny Sarah Key Books (also known as “The Haunted Bookshop” – I’d love to know why! – and included on a Guardian list of 10 of the best secondhand bookstores), both on St. Edward’s Passage, and the multi-floored emporium Heffers on St. John’s Street, which has a great selection of board games and gift items as well as new and used books.

As a literary destination, Cambridge left a bit to be desired, though. There weren’t any literary graves for me to find, nor any notable houses or statues. Many of the college’s famous alumni are known for work in other fields. There’s Newton, Darwin and Hawking in the sciences, for instance – they all appear in this mural in the hostel dining room. Plenty of political figures attended, as well as lots of living authors (Wikipedia has an extensive list; the hostel wall featured Zadie Smith as a fairly recent example of a literary alumna).

So, overall, a nice enough city for a day trip but not somewhere you need to stay much longer. Granted, it was outside of term time so King’s College wasn’t running its usual chapel services, and I never did make it out to the Fitzwilliam Museum. Still, I reckon you’ll find much more to see and do in Oxford, a city I’ve visited again and again ever since my undergraduate study abroad days took me there for weekly theology tutorials.

Your thoughts (on new cities, connecting with nature and secondhand book shopping) are always welcome!