It was a definite case of judging a book by its cover: I saw a photo of Fiona Melrose’s debut novel, Midwinter, on Twitter and – without reading much about it at all – sent off a quick request e-mail to the publisher. All I knew was that it was about a father and son, that it was set in Suffolk, that a fox featured somewhere, and that Zambia was involved somehow. But that was enough to convince me that this was a book I wanted to read. 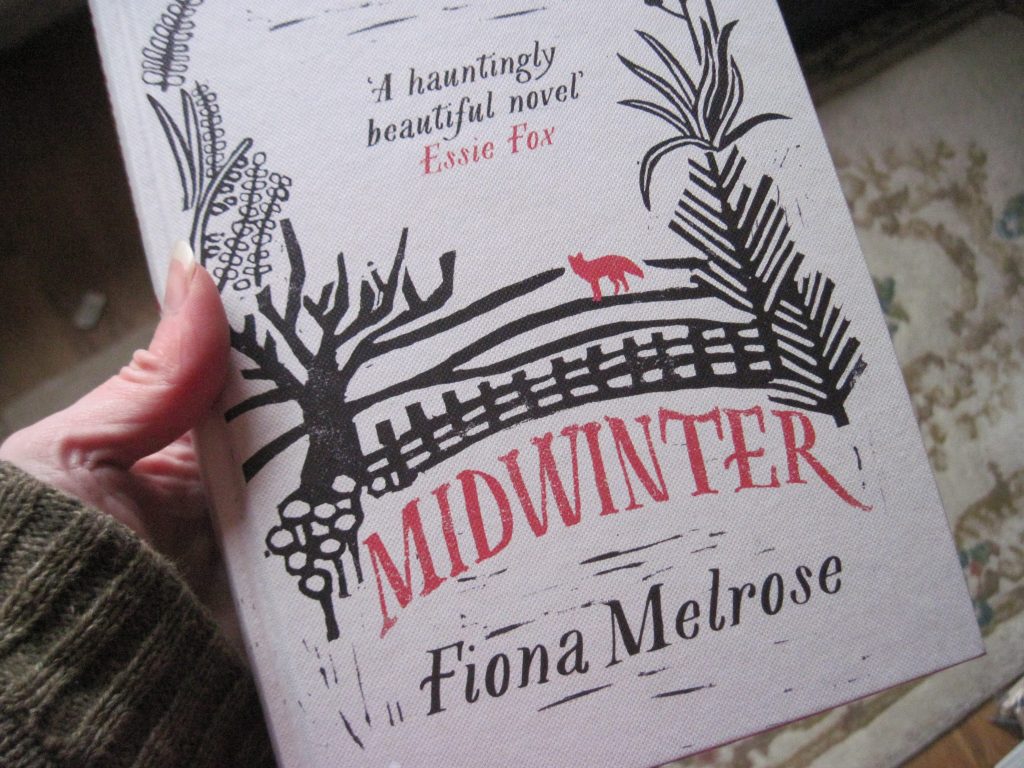 I had assumed the title would refer to the novel’s setting; although it does take place during the colder months of the year, Midwinter is also the main characters’ last name. Landyn Midwinter and his twenty-year-old son, Vale, are farmers in the Suffolk countryside. They’re both joined and divided by the memory of Vale’s mum Cecilia’s violent death ten years ago in Zambia, where the family had gone to seek their fortune after money troubles on the English farm. Vale blames Landyn for Cessie’s murder, and the past still fuels explosions between them in the present day.

The novel opens with Vale and his best friend, Tom, who were raised like brothers, stealing a boat and going for a drunken nighttime sail. This scene reminded me of the cataclysmic maritime sections of Wyl Menmuir’s The Many and ends in near-disaster. Vale is fine, but as Tom spends the next weeks in hospital it becomes clear that he will not escape undamaged. Vale and Landyn don’t see eye to eye about what Vale owes his friend; they also disagree about Landyn’s sentimental attitude towards animals: farm dogs and chickens, as well as a vixen he is thrilled to see on his land, thinking of her as an emissary from his lost wife.

Vale and Landyn narrate the book in alternating first-person chapters. It’s their country voices and the father–son theme that drive the story. “It could never be the end for me and Vale,” Landyn says. “I didn’t have a choice in it. Been like that how many times since Cessie passed, all beaten and tired and nothing left.” And yet Vale “cut me right where he knew there was fresh meat, the type that doesn’t knit.” Landyn’s voice worked better for me, but I liked how the same themes crop up for both men as they go through the motions of everyday farming life: guilt over bad decisions, a hot temper, and awkwardness around women.

Past and present coexist stylishly through flashbacks to the Midwinters’ brief time in Africa, and there are several climactic scenes of animal deaths, one quite gruesome – something to keep in mind if you are sensitive to such things.

At a certain point, though, the novel started feeling repetitive to me. Some incidents are recounted from both points of view, but the repetition doesn’t add anything. I thought the book could stand to lose 40–60 pages – page 224 would have served as a perfectly good ending, for instance. In fact, the whole thing feels like an early draft: it’s surprisingly poorly edited in terms of punctuation, typos and compound words.

In all, I think this edition of Melrose’s debut novel doesn’t do her justice. Luckily, I was impressed enough by her elegant treatment of fraught relationships and ongoing guilt that I will still be looking out for her future work.

Other books (all by women!) this reminded me of:

Midwinter was published in the UK by Corsair on November 2nd. My thanks to Helen Upton of Little, Brown for the free review copy.