Today would have been Doris Lessing’s 100th birthday; she in fact died in 2013. Reading Lara Feigel’s Free Woman last year encouraged me to try more from Lessing, and I’m glad that I did so this month. I started with The Fifth Child, a horror novella for R.I.P., followed by the novel Lessing brought with her when she left Southern Rhodesia (now Zimbabwe) for England.

I had trouble believing that this novel a) was Lessing’s debut and b) is now nearly 70 years old. It felt both fresh and timeless, and I could see how it has inspired writing about the white experience in Africa ever since, especially a book like Fiona Melrose’s Midwinter, in which an English farmer and his son are haunted by the violent death of the young man’s mother back in Zambia 10 years ago. 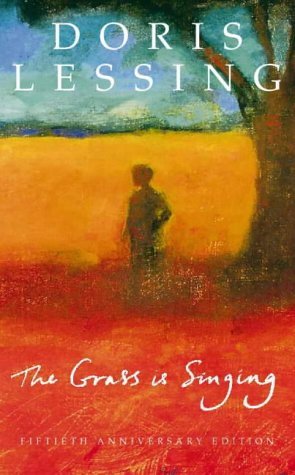 For The Grass Is Singing begins with two sly words, “MURDER MYSTERY”: a newspaper headline announcing that Mary, wife of Rhodesian farmer Dick Turner, has been found murdered by their houseboy. It’s a tease because in one sense there’s no mystery to this at all: we know from the first lines what happened to Mary. And yet we are drawn in, wondering why she was killed and how the Turners went from an idealistic young couple enthusiastic about their various money-making schemes – a shop, chickens, tobacco – to a jaded, distant pair struggling for their health, both mental and physical.

The breakdown of their marriage and the failure of their farm form a dual tragedy that Lessing explores in searing psychological detail, all while exposing (with neither judgment nor approval) how Anglos felt about the natives at that time.

There’s a sense in which this was all fated: Dick is weak, someone Mary pities rather than loves and respects; and Mary’s mixed-up feelings toward her black servants – fear, contempt, curiosity and attraction – were bound to lead to an explosion. The land itself seems to be conspiring against them, too, or is at least indifferent to their plans and dreams.

So many passages struck me for their effortless profundity. I cringed to see myself so clearly in Mary’s boredom and restlessness, along with her ambivalence about the idea of motherhood: “She hated the idea of a baby, when she thought of its helplessness, its dependence, the mess, the worry. But it would give her something to do.”

This was the fifth full-length book I’ve read by Lessing, and by far the best.

Alas, I had a Lessing DNF this month, too: 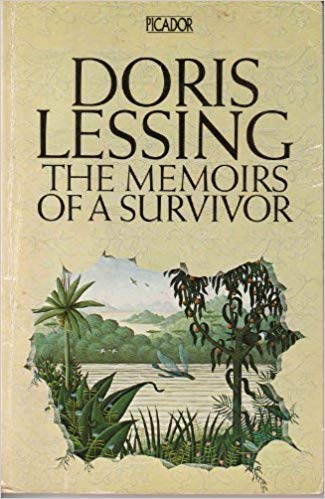 This was shelved in with the memoirs in The Bookshop, Wigtown. I’m not blaming Mr. Bythell or his staff, as this would be a very easy shelving error to make, even for those well versed in literature. But I was disappointed to realize that it’s actually one of Lessing’s detached, dreamy dystopian novels. I tried really hard with this but couldn’t make it past page 48. There’s just not much detail to latch onto. You know that it is set in a vague but believable near future (London?) in which there has been political and social breakdown, followed by gangs, looting and fighting. The narrator hides out in her apartment and is able to live a fairly normal life (“We can get used to anything at all”), at least until an adolescent girl named Emily Cartright is deposited into her care. The novel still feels relevant – the comments on rumor and gossip being as important as news; the sense that the narrator’s generation has ruined things for Emily’s generation and should accept guilt and responsibility – but there is just no plot to speak of.

Next up for me from Lessing’s works will be at least one of her heavily autobiographical Martha Quest novels.