Books that (Should Have) Literally Changed My Life

Every once in a while you’ll hear someone claim that a certain book will change your life. I think of a scene in Garden State, still one of my favorite movies of all time, where Natalie Portman’s character tells Zach Braff’s character “this song will change your life” and puts The Shins’ “New Slang” on his headphones. (Ok, it’s a good song, but not that great.)

Are there any books that have literally changed my life? I can think of a handful that have been extremely influential on my worldview and, in a couple of cases, also changed my behavior. As it happens, they’re all nonfiction.

After I got back to the States from my year abroad, I spent a few years doing some intensive reading about progressive Christianity (it was sometimes also called the emergent church) and other religions, trying to decide if it was worth sticking with the faith I’d grown up in. Although I still haven’t definitively answered this for myself, and have drifted in and out of lots of churches over the last 12 years, two authors were key to me never ditching Christianity entirely: Brian McLaren and Marcus Borg.

McLaren founded the church we attend whenever we’re back in Maryland and is the author of over a dozen theology titles, including the New Kind of Christian trilogy of allegorical novels. For me his best book is A New Kind of Christianity, which pulls together all his recurrent themes. Borg, who died in 2015, wrote several books that made a big impression on me, but none more so than The Heart of Christianity, which is the best single book I’ve found about what Christianity can and should be, going back to Jesus’ way of peace and social justice and siphoning off the unhelpful doctrines that have accumulated over the centuries.

Any number of other Christian books and authors have been helpful to me over the years (Secrets in the Dark by Frederick Buechner, How (Not) to Speak of God by Peter Rollins, Falling Upward by Richard Rohr, An Altar in the World by Barbara Brown Taylor, Without Buddha I Could Not be a Christian by Paul Knitter, Unapologetic by Francis Spufford, and various by Kathleen Norris, Rowan Williams, Richard Holloway and Anne Lamott), reassuring me that it’s not all hellfire/pie in the sky mumbo-jumbo for anti-gay Republicans, but Borg and McLaren were there at the start of my journey.

Reading is my primary means of examining society as well as my own life, so it’s no wonder that I have turned to books to learn from some gender pioneers. Hanne Blank’s accessible social history Straight (2012) is particularly valuable for its revelation of the surprisingly short history of heterosexuality as a concept – the term has only existed since the 1860s. But the book that most helped me adjust my definitions of gender and broaden my tolerance was Conundrum by Jan Morris (1974).

James Morris, born in 1926, was a successful reporter, travel writer, husband and father. Yet all along he knew he was meant to be female; it was something he had sensed for the first time as a young child sitting under the family piano: “I was three or perhaps four years old when I realized that I had been born into the wrong body, and should really be a girl … the conviction was unfaltering from the start.” In 1954 he began taking hormones to start his transition to womanhood, completed by a sex reassignment surgery in Morocco in 1972. This exceptional memoir of sex change evokes the swirl of determination and doubt, as well as the almost magical process of metamorphosing from one thing to another. Morris has been instrumental in helping me see sexuality as a continuum rather than a fixed entity.

Apart from Michael Pollan, can you guess who’s had the greatest influence on my eating habits? You might be surprised to learn it’s American novelist Jonathan Safran Foer. In 2009 he published a provocative book called Eating Animals. I’m still surprised by how powerful and challenging I found it, considering that I knew pretty much what to expect: anti-meat rhetoric from a trendy vegetarian, with plenty of arresting statistics and horrifying behind-the-scenes accounts of factory farming and slaughter. But I set aside my jaded approach to potential propaganda and let it all saturate me, and it was devastating. 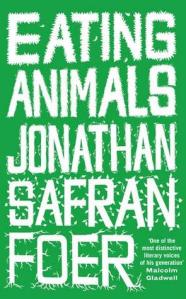 The fact that I still haven’t completely given up meat is proof of how difficult it is to change, even once you’ve been convicted. We’ve gone from eating meat occasionally to almost never, and then mostly when we’re guests at other people’s houses. But if I really reminded myself to think about where my food was coming from, I’m sure we’d be even more hardline. Foer didn’t answer all my questions – what about offal and wild game, and why not go all the way to veganism? – but I appreciated that he never characterizes the decision to be vegetarian as an easy one. He recognizes the ways food is bound up with cultural traditions and family memories, but still thinks being true to one’s principles outweighs all. (He’s brave enough to suggest to middle America that it’s time to consider a turkey-free Thanksgiving!)

There’s nothing more routine than brushing your teeth, and I never thought I would learn a new way to do it at age 32! But that’s just what Ignore Your Teeth and They’ll Go Away by Sheldon Dov Sydney gave me. He advises these steps: (1) brushing with a dry brush to remove bits of food and plaque, (2) flossing, and (3) brushing with toothpaste as a polish and to freshen breath. It takes a little bit longer than your usual quick brush and thus I can’t often be bothered to do it, but it does always leave my mouth feeling super-clean.

I frequently succumb to negative self-talk, thinking “I can’t cope” or “There’s no way I could…” Feel the Fear and Do It Anyway by Susan Jeffers helped me see that I need to be more positive in my thought life. Originally published in 1987, the self-help classic says that at the base of every fear is a belief that “I can’t handle it.” Our fears are either of things that can happen to us (aging and natural disasters) or actions we might take (going back to school or changing jobs). You can choose to hold fear with either pain (leading to paralysis) or power (leading to action). This is still a struggle for me, but whenever I start to think “I can’t” I try to replace it with Jeffers’ mantra, “Whatever it is, I’ll handle it.”

Can you think of any books that have literally changed your life?