There can’t be many of us whose lives haven’t been touched by cancer. Siddhartha Mukherjee, author of The Emperor of All Maladies, estimates that one in three of us will have cancer at some point in life, and that figure is steadily rising to one in two. Cancer hit home for me in late 2010 with my brother-in-law’s diagnosis of a brain tumor and his subsequent death in early 2015. Since then I have been reading cancer and bereavement memoirs almost compulsively, looking for clues to how we can deal with this near-universal phenomenon. Here are three personal stories of cancer that have stuck with me lately.

This Is Cancer: Everything You Need to Know, from the Waiting Room to the Bedroom 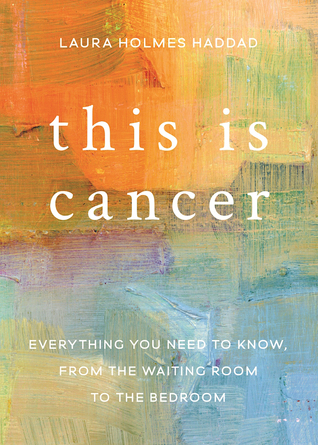 A stage IV inflammatory breast cancer survivor, Laura Holmes Haddad wrote the “What to Expect” guide she wishes she could have found at the time of her diagnosis in 2012. Throughout this comprehensive, well-structured book, she uses her own experience to set out practical advice for dealing with the everyday medical and emotional realities of cancer. On the technical side, she gives an alphabetical glossary of “Cancerspeak” vocabulary, as well as explanations of different types of scans, chemo drugs, radiation treatments, methods of coping with pain, and options for reconstruction surgery. But she also goes deep into the less obvious aspects of the disease, like hidden financial costs, little-known side effects, and complications that could affect your sleep and travel. Her tips range from the dead simple—bring your own pen for filling out hundreds of pages of forms; schedule little pick-me-ups like a mini-makeover—to major issues like marriage and parenting with cancer.

“Don’t be surprised if this thing—this cancer road trip—leads to places you never could have imagined,” Holmes Haddad writes. “I’m trying to pay it forward to other patients, to help ease some angst, to comfort.” You might be surprised to learn that this is a very pleasant read. It fluidly mixes anecdote with facts and maintains an appropriate tone: forthright and reassuring yet wry, as in the ‘Devil’s Dictionary’ type translations (“DOCTOR: ‘You might feel some discomfort.’ MEANING: ‘This will hurt like hell.’”).

No cancer patient should be without this book. That statement needs no qualifying. Yes, it might be geared more towards women, specifically breast cancer patients, and there’s some U.S.-specific information about health insurance, but much of the guidance is universally applicable. Whether for yourself or to help a family member or friend, you’ll want a copy.

My thanks to publicist Eva Zimmerman for the free e-copy for review. This Is Cancer will be released by Seal Press on Tuesday.

Late Fragments: Everything I Want to Tell You (About This Magnificent Life)

By the end of this charming memoir, I felt I knew Kate Gross as a friend. A high-flying British civil servant who helped Tony Blair found an NGO in Africa, she was shocked to learn in her early thirties that her occasional ‘bottom trouble’ was end-stage colon cancer with liver metastases. “I’m a golden girl, a people-pleaser, something who is used to graft and a pleasant smile being rewarded,” she writes, yet here was a situation she could not control. She died at age 36 in 2014.

In this short, clear-eyed book, she balances a brief recounting of her life with observations about terminal illness and trying to ensure a good future for her five-year-old twin sons. Memoirs by people facing death can often skirt close to cliché, but I felt Gross had fresh things to tell me about many subjects:

Cultivating “bitter gratitude”: “How strange, how brilliant it is that this awareness of wonder, this sense of the sublime, has been so closely intertwined with my illness as it has progressed.”

The value of literature: “Reading is an experience by which we connect ourselves to what we are, to this magnificent, awful life, in which the same grooves are being scored over and over again in different times and tongues.”

How to act around the dying: “we don’t expect great words of wisdom or solace. I just want this shit to be acknowledged”

Gross doesn’t believe in an afterlife beyond her children’s memory and this book—“nothingness-with-benefits.” I could sympathize with her picture of death, “me in the back of a black taxi, leaving an awesome party before the end, just when everyone else was starting to have real fun.” I wish she’d had longer at the party, but I’m glad she left these thoughts behind.

Haematemesis: How One Man Overcame a Fear of Things Medical and Learned to Navigate His Way Around Hospital

This is a mordantly funny account of one Australian man’s experience with recurrent cancer. In remission since 2007, Sheppard discovered in 2015 that he was once more riddled—that awful word—with leukemia. Having vowed never to go through chemo again, he learned that it had somewhat improved in the intervening years, with the drip treatments now partially replaced by tablets. This time around he ran into a lot of what he calls “Big Hospital Attitude”: scheduling issues with his bone marrow biopsy, nurses who didn’t think he could manage his own insulin treatments, and constant problems with finding veins for his many injections. Was this the much-touted “Patient-Centered Care”? Would he be better off with the “quick and relatively-painless death offered when one is mauled by a pack of wild dogs”?

“Haematemesis” means vomiting blood, and be warned: there is a lot of blood here; if you’re squeamish about needles you may struggle. There is also plenty of scatological humor. But in general I found the tone to be reminiscent of Bill Bryson in a hospital gown, especially when he’s describing squeezing his belly into a CT scanner or recounting his flatulence.

My main complaint is that at 80 pages this feels incomplete, like it’s telling just part of the story. What about his first bout with leukemia, or his earlier life (which, from a look at his Goodreads biography, seems very eventful indeed)? I understand that Sheppard wanted to get this book released while he was still able. I wish him well and hope for a sequel.

My thanks to the author for the free e-copy for review.