One of my goals with this blog is to have one convenient place where I can gather together all my writing that has appeared in disparate online locations. To that end, once a month I’ll provide links to all the book reviews I’ve published elsewhere, with a rating and a short taster so you can decide whether to click to read more. (A couple of exceptions: I won’t point out my Kirkus Indie or BlueInk reviews since I don’t get a byline.)

Death and Mr. Pickwick by Stephen Jarvis [subscription service; excerpt available to non-subscribers]: The Pickwick Papers was a Victorian publishing phenomenon. Originally envisioned as a series of sporting tales to accompany Robert Seymour’s engravings in a monthly magazine, the story soon took on a life of its own. Debut novelist Jarvis believes that a conspiracy between Dickens and his publishers covered up two key facts: Pickwick was primarily Seymour’s creation, and Dickens’s brash attempt to take it over was the impetus for Seymour’s suicide in 1836. At 800+ pages, this novel is chock-full of digressions – some amusing, others seemingly irrelevant. Jarvis started the project with the ambition of reading everything ever written about Pickwick. The results are exhaustive…but also a little exhausting. 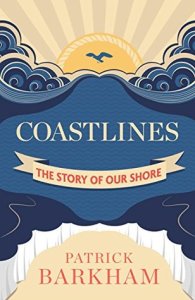 Coastlines by Patrick Barkham: In his third nature book, Guardian journalist Patrick Barkham blends science, history, and biography as he travels sections of the British coast protected through Enterprise Neptune, a National Trust campaign celebrating its 50th anniversary this year. His structural approach is unconventional: neither chronological nor geographical, but thematic. In sections on childhood, war, work, art, and faith, he highlights the many practical and metaphorical roles the coast has played in the British story. The choices of location often feel arbitrary and the themes are not quite strong enough to pull the book together, but Barkham succeeds in evoking the mysterious grandeur of the coast.

Two Lives by Sarah Bourne (& interview): A car accident causes Emma and Loretta’s lives to be intertwined in surprising ways as they negotiate loss, domestic violence and motherhood. There’s a great dynamic between these characters: Loretta vicariously relives her own experience of pregnancy through Emma. As time moves on, their relationship is more like Barbara and Sheba’s in Notes on a Scandal; secrets provoke a tacit power struggle. For a short book, it’s filled with heavy social issues. It loses points for poor cover design as well as frequent typos. All the same, this is a compelling story built around likeable main characters. It does what fiction does best: exploring the small moments that can change lives for good. 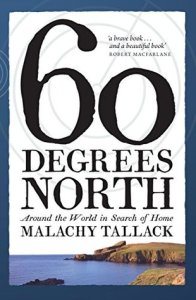 Sixty Degrees North by Malachy Tallack: “Geography begins at the only point of which we can be certain. It begins inside. And from there, from inside, rises a single question: where am I?” Tallack muses. This is a beautifully introspective book about the search for home and identity amidst the changes of time and the trappings of place. The goal of traveling across cold northern places makes it reminiscent of Joanna Kavenna’s The Ice Museum. However, a more telling comparison is with George Mackay Brown, chronicler of the Orkney Islands; like Brown, Tallack is interested in islands, both literally and metaphorically, as places of both isolation and authentic community.

The American cover is more evocative of the subject matter.

A Little Life by Hanya Yanagihara: Sure to be one of the books of the year, if not the decade. Jude St. Francis: Dickensian orphan, patron saint of lost causes, Christlike Man of Sorrows, and one of the most memorable characters in recent fiction. The reading experience might have been unbearable due to his suffering, but Yanagihara’s skill keeps you reading: the narration is matter-of-fact and revelation of Jude’s past is incremental, so distressing flashbacks are punctuated with more innocuous events. There is nothing ‘little’ about this book or the life portrayed. The novel is an attempt to tackle the monolithic question of what makes life worth living. Among the potential answers: love (though it doesn’t conquer all), friendship, creativity, and the family you create for yourself. Yanagihara has instantly shot to literary greatness; this is Pulitzer and Man Booker Prize-winning material.

BookTrib: A preview of the PBS broadcast of Poldark, which aired on BBC earlier this year.

I also post reviews of most of my casual reading and skimming on Goodreads (the rating is below each description).

Preparation for the Next Life by Atticus Lish: Like West Side Story, this debut novel is an updated Romeo and Juliet narrative – a tragedy-bound love story with a gritty contemporary setting and a sobering message about racism and the failure of the American dream. Lish’s post-9/11 New York City is less melting pot than Boschian hell, a violent abyss lubricated with the sweat of illegal immigrants. The matter-of-fact style somehow manages to elevate the everyday and urban into an art form. (Full review in August 2015 issue of Third Way magazine.)

Housebreaking by Dan Pope: This tightly crafted novel of adultery in dysfunctional suburbia is somewhat reminiscent of Tom Perrotta’s Little Children or the movie Far from Heaven, but with less memorable characters and storyline overall. The strategy of revisiting the same events of the late summer and fall of 2007 from different characters’ perspectives makes it feel slightly repetitive and claustrophobic.

In a Dark Wood by Joseph Luzzi: In November 2007 Joseph Luzzi’s wife Katherine was in a fatal car accident; she had been eight and a half months’ pregnant, so within one day he entered “the wild uncharted terrain of being a single father and widower.” For several years Luzzi disengaged from fatherhood, throwing himself into his work – teaching Italian at Bard College, editing the proofs for a forthcoming book – while his mother did the hard work of childrearing. As Virgil was to Dante, Dante is to Luzzi: a guide through the hell of loss and into a vita nuova as he starts a new life with his daughter Isabel and, later, his second wife.

Big Magic by Elizabeth Gilbert: Gilbert sets herself up as a layman’s creativity guru much like Anne Lamott does with Bird by Bird or Stephen King with On Writing. This is based on Gilbert’s TED talks, and it reads very much like a self-help pep talk, with short chapters, lots of anecdotes, and buzz words to latch onto. Her central tenet is “You do not need anybody’s permission to live a creative life.” The voice and message are similar to Rob Bell’s in the field of contemporary theology: reminding readers that what is too precious for words should, perhaps paradoxically, be held loosely with open hands. Releases September 22nd.

Miss Emily by Nuala O’Connor: Emily Dickinson’s Amherst is an inviting setting, and the alternating first-person voices of Emily and the family’s Irish maid, Ada Concannon, are both well realized. However, the plot soon gets mired in the melodrama of a wrong done to Ada in the Dickinson household, which results in a crisis that – you guessed it – requires the reclusive Emily to leave the house. After reading, I remained greedy for more of Emily’s inner life and poetry.

A Window Opens by Elisabeth Egan: A sweet, funny debut novel about a woman who tries to juggle all the elements of a happy life: finding the perfect job for a modern book-lover…but also being a good mother to her three children, supporting her husband after he loses his job at a law firm, and helping her mother care for her father as he suffers a relapse of throat cancer. It succeeds because its female first-person voice is immediately engaging. You like Alice and root for her. Releases August 25th.

The Sunken Cathedral by Kate Walbert: Much has been made of Walbert’s “Impressionistic” style. There is some beautiful writing here for sure, but I think it would lend itself better to short stories as there is not enough plot or character continuity to latch onto. Essentially the novel is about a set of New Yorkers in a Chelsea brownstone (chiefly Marie, an old woman who came to America from France after World War II) and their disparate memories and experiences.