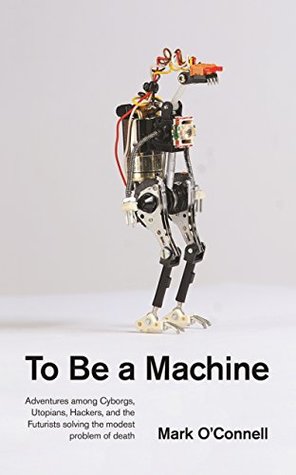 Hey, we got it right! Mark O’Connell’s To Be a Machine, our shadow panel’s pick, won the Wellcome Book Prize 2018 last night. Of the three shadow panels I’ve participated in and the many others I’ve observed, this is the only time I remember the shadow winner matching the official one. Clare, Paul and I were there in person for the announcement at the Wellcome Collection in London. When we briefly spoke to the judges’ chair, Edmund de Waal, later in the evening, he said he was “relieved” that their decision matched ours – but I think it was definitely the other way around!

Simon Chaplin, Director of Culture & Society at the Wellcome Trust, said that each year more and more books are being considered for the prize. De Waal revealed that the judges read 169 books over nine months in what was for him his most frightening book club ever. “To bring the worlds of medicine and health into urgent conversation” requires a “lyrical and disciplined choreography,” he said, and “how we shape stories of science … is crucial.” He characterized the judges’ discussions as both “personal and passionate.” The Wellcome-shortlisted books make a space for public debate, he insisted. 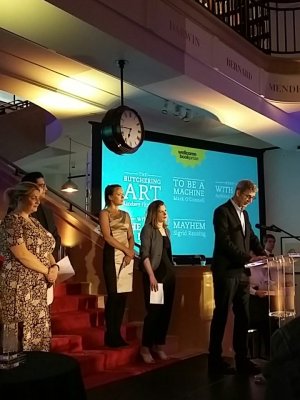 The judges brought each of the five authors present onto the stage one at a time for recognition. De Waal praised Ayobami Adebayo’s “narrative of hope and fear and anxiety” and Meredith Wadman’s “beautifully researched and paced thriller.” Dr Hannah Critchlow of Magdalene College, Cambridge called Lindsey Fitzharris’s The Butchering Art “gruesome yet fascinating.” Oxford English professor Sophie Ratcliffe applauded Kathryn Mannix’s book and its mission. New Scientist editor-in-chief Sumit Paul-Choudhury said Mark O’Connell’s book is about the future “just as much as what it means to be human in the twenty-first century.” Journalist and mental health campaigner Bryony Gordon thanked Sigrid Rausing for her “great honesty and stunning prose.”

But there can only be one winner, and it was Mark O’Connell, who couldn’t be there as his wife is/was giving birth to their second child imminently. The general feeling in the room was that he’d made the right call by deciding to stay with his family. He must be feeling like the luckiest man on earth right now, to have a baby plus £30,000! Max Porter, O’Connell’s editor at Granta and the author of Grief Is the Thing with Feathers, received the award on his behalf and read out the extremely witty speech he’d written in advance.

Afterwards we spoke to three of the shortlisted authors. Kathryn Mannix said she’d so enjoyed following our shadow panel reviews and that it was for the best that O’Connell won, as any other outcome might have spoiled the lovely girls’ club the others had going on during the weekend’s events. I got two signatures and we nabbed a quick photo with Lindsey Fitzharris. It was also great to meet Simon Savidge, the king of U.K. book blogging, and author and vlogger Jen Campbell. Other ‘celebrities’ spotted: Sarah Bakewell and Ben Goldacre. 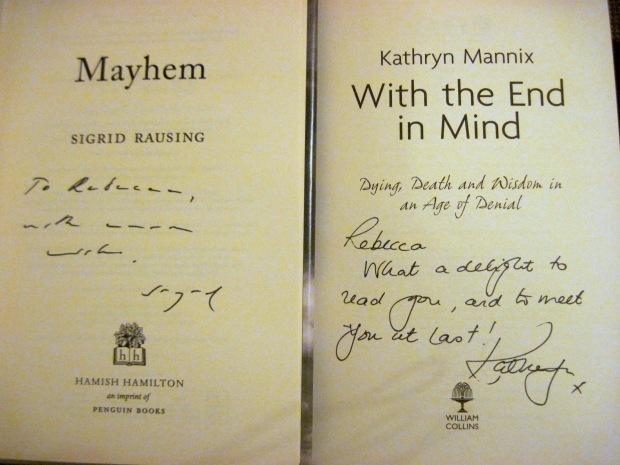 This time I stayed long enough for pudding canapés to come around – raspberry cake pops and mini meringues with strawberries. What a great idea! On the way out I again acquired a Wellcome goody bag: this year’s tote with a copy of The Butchering Art, which I only had on Kindle before. I’d also treated myself to this brainy necklace from the Wellcome shop and wore it to the ceremony. An all-round great evening. I’m looking forward to next year’s prize season already! 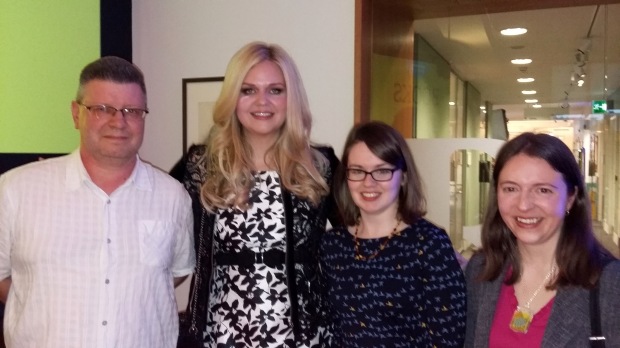 Paul, Lindsey Fitzharris, Clare and me. 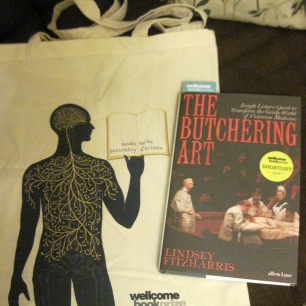 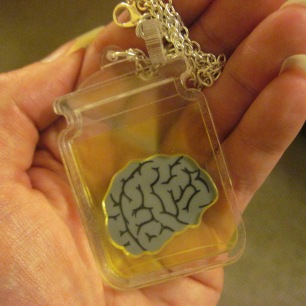 At the Existentialist Café by Sarah Bakewell 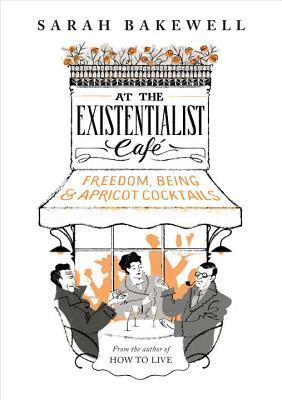 I’ve long meant to read Sarah Bakewell’s How to Live, a biography of Montaigne that also promises to be a deep examination of philosophical and ethical issues. When I heard she had a new book out, I jumped at the chance to learn more about existentialism. I’ve come away from At the Existentialist Café with only a nebulous sense of what existentialism actually means (though Bakewell’s bullet-pointed list of points towards a definition on page 34 is helpful), but certainly with more knowledge about and appreciation for Jean-Paul Sartre and Simone de Beauvoir, two of her main subjects. This is appropriate given the shift in Bakewell’s thinking: “When I first read Sartre and Heidegger, I didn’t think the details of a philosopher’s personality or biography were important. … Thirty years later, I have come to the opposite conclusion. Ideas are interesting, but people are vastly more so.”

Some of the interesting characters herein, apart from Sartre and de Beauvoir (always referred to in these pages as “Beauvoir,” which irked me unduly), are Edmund Husserl, Martin Heidegger, Karl Jaspers, Hannah Arendt, Maurice Merleau-Ponty and Albert Camus. It’s a large cast; you may well find yourself flipping back and forth to the helpful who’s who list in the back of the book. I was amused to see that Freiburg, Germany is the seat of phenomenology (which gave rise to existentialism) – I’m heading there in June to stay with friends at the start of a mini European tour. Husserl was the chair of philosophy at Freiburg, and Heidegger his colleague.

The best I can make out, Heidegger’s philosophy was about describing experience to get to the heart of things. Disregard peripherals and focus on the self’s knowledge of the world, he advised. His best known work, Being and Time, contrasted individual beings with Being itself (i.e. ontology). Think of him as an experimental, modernist novelist, Bakewell advises; understanding what he’s doing with his philosophy is difficult otherwise. Existentialism built on this framework but emphasized freedom and how it is exercised in particular situations.

World War II, especially the year 1945, was a turning point for many of the philosophers discussed. Sartre was held in a POW camp but his eye troubles gave him a way out. Many left Europe for America due to anti-Semitism, including Hannah Arendt and Bruno Bettelheim. Although Heidegger contrasted “the they” (das Man – more similar, perhaps, to the English phrase “the Man”) with the voice of conscience in such a way that suggested one should resist totalitarianism, he would later be exposed as a Nazi. In the following years, the United States became very popular culturally: jazz music, film noir, Hemingway. At the same time, the French were shocked at America’s racial inequality. Sartre believed that one should always take the opinion of the “least favored” or most oppressed party in any situation, which would lead him to speak out for minorities and the colonized, as in the Algerian liberation movement of the 1950s–60s. In the meantime, the rise of the Soviet Union and the development of the atom bomb would emerge as imminent societal threats.

Sartre and de Beauvoir had an open relationship but clearly relied on and felt deeply about each other, especially when it came to their writing. Bakewell convinced me of Sartre’s surprising sex appeal, despite his unprepossessing appearance: “down-turned grouper lips, a dented complexion, prominent ears, and eyes that pointed in different directions.” Apparently he had a silly side and would even do Donald Duck impressions. At the same time, he had rock-solid convictions, as evidenced by his refusal of the Légion d’Honneur and the Nobel Prize. I also learned that he was a biographer of Jean Genet and Gustave Flaubert; his biography of the latter, in three volumes, stretched to 2800 pages! Bakewell waxes anti-lyrical in her account of the disheartening experience of reading it: “Occasional lightning flashes strike the primordial soup, although they never quite spark it into life, and there is no way to find them except by dredging through the bog for as long as you can stand it.”

From the title and subtitle (“Freedom, Being and Apricot Cocktails”), I expected this book to be a bit more of a jolly narrative than it was. The frequent Left Bank Paris setting is atmospheric, but the tone is never as blithe as promised. I would also have liked some additional autobiographical material from Bakewell, who grew up in Reading, England (where I currently live) and met the existentialists through Sartre’s Nausea at age 16.

In the end the fault may not be her book’s but mine: I wasn’t up for fully engaging with a multi-subject biography packed with history and hard-to-grasp philosophical ideas. I’d recommend this to readers who long for bohemian Paris and have enjoyed either an existentialist work or a philosophical novel like Sophie’s World (Jostein Gaarder) or 36 Arguments for the Existence of God (Rebecca Goldstein).

With thanks to Chatto & Windus for the review copy.

Further reading: If anything, I think I’m likely to try de Beauvoir’s autobiographical works – the descriptive language Bakewell quotes from them sounds appealing, and of course she was fundamental in paving the way for modern feminism.

You can read an excerpt from At the Existentialist Café, about de Beauvoir’s composition of The Second Sex, at Flavorwire. See also Bakewell’s Guardian list of 10 reasons why we should still be reading the existentialists.

Have you read anything by the existentialists? What would you recommend?