My resolution to read just my own books for the summer largely fell by the wayside, but I did manage to get through another handful of print books from the shelves. Below I give brief write-ups of what I’ve finished lately and recall how these books came to be in my collection. 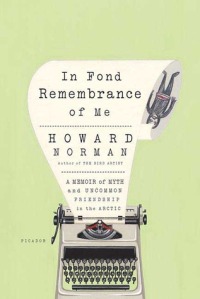 In Fond Remembrance of Me by Howard Norman: A strange, short book that blends memoir and Inuit legends. In 1977 Norman travelled to Churchill, Manitoba to transcribe an oral storyteller’s folktales. Most of these were about Noah coming into contact with the peoples of the far north and displeasing them by refusing to give over the exotic animals of his ark as food. Helen Tanizaki, a scholar in her late thirties who tried half-heartedly to hide the fact that she was dying of stomach cancer, was also there to translate stories into Japanese. It’s easy to see why she impressed Norman with her mystical stoicism. She was a keen birdwatcher, and declared she wanted to be reincarnated as a seabird. The portrait of Helen is compelling, but the book doesn’t hang together well, especially because the interspersed legends are so repetitive. [From my Amazon wish list last Christmas.] 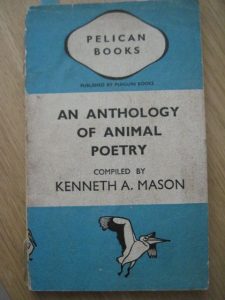 An Anthology of Animal Poetry, ed. Kenneth A. Mason: This was assembled in 1940 by a 19-year-old, and it shows. The choices are obvious and old-fashioned; too many of the poems are long and insist on rhyming. However, I discovered some real gems. Three poems in a row are about skylarks – by Gerard Manley Hopkins, Wordsworth and Shelley – and they’re all brilliant, using the bird as an emblem of freedom. Shelley’s “To a Skylark,” in particular, I can’t believe I’ve never encountered before. Its 21 stanzas praise the bird’s pure joy and wonder how careworn humans might emulate it: “We look before and after, / And pine for what is not … Teach me half the gladness / That thy brain must know.” My vintage Pelican copy has ads for chocolate and cigarettes that made me laugh. [Bought from a secondhand bookstore in Tunbridge Wells for 10 pence.] 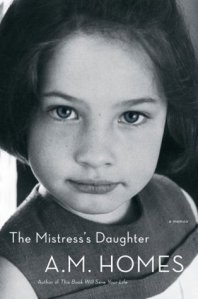 The Mistress’s Daughter by A.M. Homes: This grew out of a New Yorker article Homes published about meeting her biological parents in her early 30s. Her mother carried on an affair with her married boss, starting when she was just a teenager – Homes learned that she was the mistress’s daughter. This is the story of how her birth mother tried to get involved in her life, in a really rather stalker-ish way, and the occasional contact she had from her birth father. The blow-by-blow gets a little boring, especially when it’s Homes and her father only communicating via lawyers. Homes doesn’t really make much of a contribution to the literature of adoption, though this is a pleasant enough read. “I am an amalgam. I will always be something glued together, something slightly broken.” [Bought from a library book sale in America for $1.] 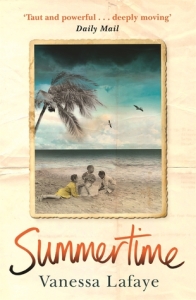 Summertime by Vanessa Lafaye: An enjoyable historical novel based on several true-life elements: a work camp of army veterans based at the Florida Keys, segregation and lynching, and a massive hurricane that hit in 1935. Main characters Missy and Henry are well drawn, but beyond them I thought Lafaye splits the perspective too far: I didn’t need to see through the eyes of lots of the veterans, the shopkeeper, or the policeman investigating the brutal beating of a local white woman. As for this crime, I knew whodunit pretty much right away, so there wasn’t any suspense regarding that plot point. However, Lafaye does do a great job of building tension in the novel’s final third as the storm approaches. The U.S. title (Under a Dark Summer Sky) is much better; “Summertime” evokes strangely rosy images and so is inappropriate. [I won a copy in a Goodreads giveaway.] 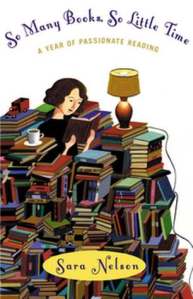 So Many Books, So Little Time: A Year of Passionate Reading by Sara Nelson: Nelson is forthright about what she likes and doesn’t like; she also ruefully reflects on the gap between what she meant to read and what she actually read in 2002. Her reading diary tells a lot about her personal life too: having a non-reading spouse and a novelist sister; memories of her late father; and the struggle to instill a love of reading into her young son. Inevitably a little dated as it engages with ‘It’ books of the time like A Million Little Pieces and Kitchen Confidential, the book has staying power because in each chapter Nelson broadens out from her discussion of one or more books to craft a thematic essay. This was meant to be my bedside book for the second half of the year, but I devoured it in less than seven weeks. It’s full of lines bibliophiles can relate to. [Free from The Book Thing of Baltimore.] 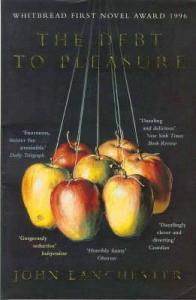 The Debt to Pleasure by John Lanchester: Tarquin Winot, the snobby Francophile who narrates Lanchester’s debut novel, has a voice reminiscent of Oliver in Julian Barnes’s Talking It Over and Love etc. His opinionated, verbose speech provides much of the book’s wit. “This is not a conventional cookbook,” the first line warns, but a foodie’s tribute to traditional English and French dishes that compose the best seasonal menus. As we travel with Tarquin from Portsmouth to Provence we learn more about this peculiar character through the memories dishes elicit: about his Irish nanny, his sculptor brother’s boarding school years, etc. Lanchester subtly introduces notes of doubt about the narrator’s reliability, until we have to wonder how much his tale resembles Perfume or The Talented Mr. Ripley. Deliciously clever and sinuous. [Bought from a London charity shop for 20 pence.]

I spent much of the summer bogged down in several very good but not particularly page-turning works of nonfiction. I’ll review those in due course.

Up next, though, are a few Booker Prize longlist mini-reviews in advance of the shortlist announcement on Tuesday.

“They say books about books are profitless, but they certainly make very pleasant reading.”

A Book Addict’s Treasury by Julie Rugg and Lynda Murphy was my bedside book for the first half of the year. I like having a literary-themed book to read a bit of daily, rather like a secular devotional. Last year John Sutherland and Stephen Fender’s Love, Sex, Death and Words filled that purpose. The authors have chosen a huge variety of quotations from fiction and nonfiction, ranging from the Middle Ages to the present day. The chapters are loosely thematic, with topics like lending and borrowing, organizing one’s library, bad book habits, and so on.

Here’s a sampling of the quotes that meant the most to me: 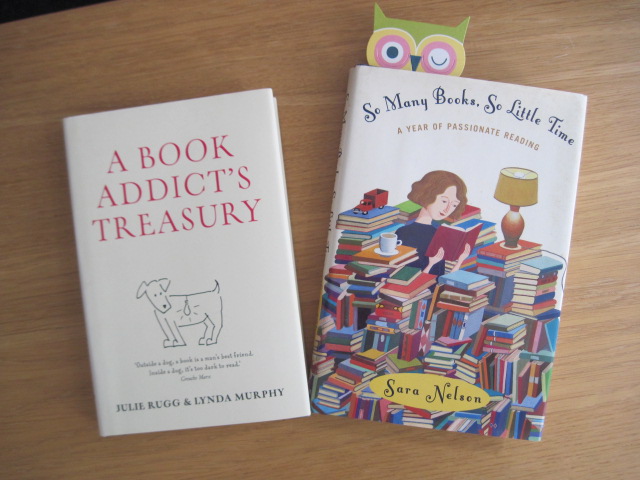 I also came across two controversial reader habits I’m not sure how I feel about:

1. “The outward and visible mark of the citizenship of the book-lover is his book-plate.” (Edmund Gosse)

I do have two packs of book-plates featuring a rather nice black-and-white engraving of a puffin on a rock, but I’ve never used them. For one thing, my collection seems too changeable: what if I decide, after reading a book, to resell it or pass it on to someone else? I also wouldn’t know how to choose which lucky 20 books get a bookplate. (Probably only those monolithic hardbacks I’m sure to keep as reference books for decades to come.)

I’ve never annotated my books, apart from a few textbooks in college. It just seems like defacement; are my thoughts really so important that they need to be preserved forever? Instead I use Post-It flags to mark passages I want to revisit, and usually copy those out into my annual book list (a huge Word file).

My current bedside book fit for a bibliophile is So Many Books, So Little Time: A Year of Passionate Reading by Sara Nelson. Favorite quote so far:

“Part of the appeal of books, of course, is that they’re the cheapest and easiest way to transport you from the world you know into one you don’t. … dollar for dollar, hour per hour, it’s the most expedient way to get from our proscribed little ‘here’ to an imagined, intriguing ‘there.’”

What are your favorite book-related quotes? Do you use bookplates and annotations?