As I did in 2019, 2020, and 2021, I’ve picked out some favourite book covers from the year’s new releases. Fewer have stood out to me this year for some reason, so it’s just a baker’s dozen here, and all of them are from books I’ve actually read.

Usually it’s the flora and fauna covers that get me. Not so many of those this year, though!

Instead, it was mostly about colour blocks and textures.

And a few of my favourites feature partial images of female bodies:

I also appreciate the use of a blocky 1980s-reminiscent font on these two. It’s appropriate to the contents in each case. Powell’s poems are loosely inspired by/structured like an old-school hip-hop album, and Zevin’s novel is about the love of vintage video games.

What cover trends have you noticed this year? Which ones tend to grab your attention?

Just two weeks until moving day – we’ve got a long weekend ahead of us of sanding, painting, packing and gardening. As busy as I am with house stuff, I’m endeavouring to keep up with the new releases publishers have been so good as to send me. Today I review three short works: the story of accompanying a beloved husband to Switzerland for an assisted suicide, a coolly perceptive novella of American girlhood, and a vivid memoir of two momentous relationships. (April was a big month for new books: I have another 6–8 on the go that I’ll be catching up on in the future.) All:

In Love: A Memoir of Love and Loss by Amy Bloom 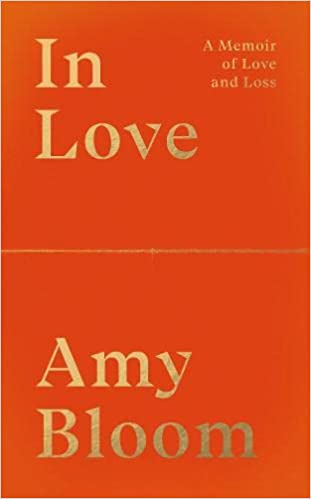 Given the psychological astuteness of her fiction, it’s no surprise that Bloom is a practicing psychotherapist. She treats her own life with the same compassionate understanding, and even though the main events covered in this brilliantly understated memoir only occurred two and a bit years ago, she has remarkable perspective and avoids self-pity and mawkishness. Her husband, Brian Ameche, was diagnosed with early-onset Alzheimer’s in his mid-60s, having exhibited mild cognitive impairment for several years. Brian quickly resolved to make a dignified exit while he still, mostly, had his faculties. But he needed Bloom’s help.

“I worry, sometimes, that a better wife, certainly a different wife, would have said no, would have insisted on keeping her husband in this world until his body gave out. It seems to me that I’m doing the right thing, in supporting Brian in his decision, but it would feel better and easier if he could make all the arrangements himself and I could just be a dutiful duckling, following in his wake. Of course, if he could make all the arrangements himself, he wouldn’t have Alzheimer’s” 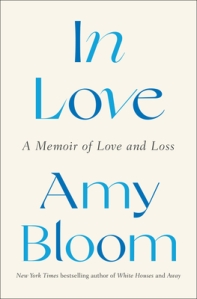 She achieves the perfect tone, mixing black humour with teeth-gritted practicality. Research into acquiring sodium pentobarbital via doctor friends soon hit a dead end and they settled instead on flying to Switzerland for an assisted suicide through Dignitas – a proven but bureaucracy-ridden and expensive method. The first quarter of the book is a day-by-day diary of their January 2020 trip to Zurich as they perform the farce of a couple on vacation. A long central section surveys their relationship – a second chance for both of them in midlife – and how Brian, a strapping Yale sportsman and accomplished architect, gradually descended into confusion and dependence. The assisted suicide itself, and the aftermath as she returns to the USA and organizes a memorial service, fill a matter-of-fact 20 pages towards the close.

Hard as parts of this are to read, there are so many lovely moments of kindness (the letter her psychotherapist writes about Brian’s condition to clinch their place at Dignitas!) and laughter, despite it all (Brian’s endless fishing stories!). While Bloom doesn’t spare herself here, diligently documenting times when she was impatient and petty, she doesn’t come across as impossibly brave or stoic. She was just doing what she felt she had to, to show her love for Brian, and weeping all the way. An essential, compelling read.

With thanks to Granta for the free copy for review.

I’ve read Manguso’s four nonfiction works and especially love her Wellcome Book Prize-shortlisted medical memoir The Two Kinds of Decay. The aphoristic style she developed in her two previous books continues here as discrete paragraphs and brief vignettes build to a gloomy portrait of Ruthie’s archetypical affection-starved childhood in the fictional Massachusetts town of Waitsfield in the 1980s and 90s. She’s an only child whose parents no doubt were doing their best after emotionally stunted upbringings but never managed to make her feel unconditionally loved. Praise is always qualified and stingily administered. Ruthie feels like a burden and escapes into her imaginings of how local Brahmins – Cabots and Emersons and Lowells – lived. Her family is cash-poor compared to their neighbours and loves nothing more than a trip to the dump: “My parents weren’t after shiny things or even beautiful things; they simply liked getting things that stupid people threw away.”

The depiction of Ruthie’s narcissistic mother is especially acute. She has to make everything about her; any minor success of her daughter’s is a blow to her own ego. I marked out an excruciating passage that made me feel so sorry for this character. A European friend of the family visits and Ruthie’s mother serves corn muffins that he seems to appreciate.

My mother brought up her triumph for years. … She’d believed his praise was genuine. She hadn’t noticed that he’d pegged her as a person who would snatch up any compliment into the maw of her unloved, throbbing little heart.

At school, as in her home life, Ruthie dissociates herself from every potentially traumatic situation. “My life felt unreal and I felt half-invested. I felt indistinct, like someone else’s dream.” Her friend circle is an abbreviated A–Z of girlhood: Amber, Bee, Charlie and Colleen. “Odd” men – meaning sexual predators – seem to be everywhere and these adolescent girls are horribly vulnerable. Molestation is such an open secret in the world of the novel that Ruthie assumes this is why her mother is the way she is.

While the #MeToo theme didn’t resonate with me personally, so much else did. Chemistry class, sleepovers, getting one’s first period, falling off a bike: this is the stuff of girlhood – if not universally, then certainly for the (largely pre-tech) American 1990s as I experienced them. I found myself inhabiting memories I hadn’t revisited for years, and a thought came that had perhaps never occurred to me before: for our time and area, my family was poor, too. I’m grateful for my ignorance: what scarred Ruthie passed me by; I was a purely happy child. But I think my sister, born seven years earlier, suffered more, in ways that she’d recognize here. This has something of the flavour of Eileen and My Name Is Lucy Barton and reads like autofiction even though it’s not presented as such. The style and contents may well be divisive. I’ll be curious to hear if other readers see themselves in its sketches of childhood.

With thanks to Picador for the proof copy for review.

Sara Rauch won the Electric Book Award for her short story collection What Shines from It. This compact autobiographical parcel focuses on a point in her early thirties when she lived with a long-time female partner, “Piper”, and had an intense affair with “Liam”, a fellow writer she met at a residency.

“Longing isn’t cheating (of this I was certain), even when it brushes its whiskers against your cheek.” 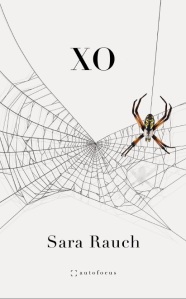 Adultery is among the most ancient human stories we have, a fact Rauch acknowledges by braiding through the narrative her musings on religion and storytelling by way of her Catholic upbringing and interest in myths and fairy tales. She’s looking for the patterns of her own experience and how endings make way for new life. The title has multiple meanings: embraces, crossroads and coming full circle. Like a spider’s web, her narrative pulls in many threads to make an ordered whole. All through, bisexuality is a baseline, not something that needs to be interrogated.

This reminded me of a number of books I’ve read about short-lived affairs – Tides, The Instant – and about renegotiating relationships in a queer life – The Fixed Stars, In the Dream House – but felt most like reading a May Sarton journal for how intimately it recreates daily routines of writing, cooking, caring for cats, and weighing up past, present and future. Lovely stuff.

With thanks to publicist Lori Hettler and Autofocus Books for the e-copy for review.

Will you seek out one or more of these books?

What other April releases can you recommend?

This is a bimonthly feature of mine. I call it Book Serendipity when two or more books that I read at the same time or in quick succession have something in common – the more bizarre, the better. Because I usually 20–30 books on the go at once, I suppose I’m more prone to such incidents. (I’ve realized that, of course, synchronicity is really the more apt word, but this branding has stuck.) I always like hearing about your bookish coincidences, too!