Out and About in Edinburgh

After going to Wigtown in April, I never expected I’d be back in Scotland this year. This was a fairly last-minute trip we booked so that my husband could attend a short rewilding workshop for PhD students. They all met up in Edinburgh and proceeded by bus into the Cairngorms to see sites of habitat restoration and potential future wildlife releases. I stayed behind at our Airbnb flat and kept up a reduced work load while enjoying the city break.

Day 1, Wednesday the 19th: A travel day. Our journey – two train rides plus a short walk at either end – should have taken just over 7 hours. Instead, it took 14. Recent storms had taken down wires at Durham and left debris on the line, so our original train was terminated at York. We managed to get a connection to Newcastle, queued outside for two hours for rail replacement buses that never came, and finally got a very delayed train through to Edinburgh. Our poor Airbnb hostess’s parents had to wait up for us until 12:40 a.m.

Day 2, Thursday the 20th: After just a few hours of sleep, we were up early so that Chris could leave by 7:15 for his meet-up on the Edinburgh campus. The props and sketches scattered about suggest that the flat owner is a theatre costume and set designer. The view overlooking Holyrood Park and Arthur’s Seat is spectacular – a great place to put in a few hours of proofreading before heading out to town after lunch. 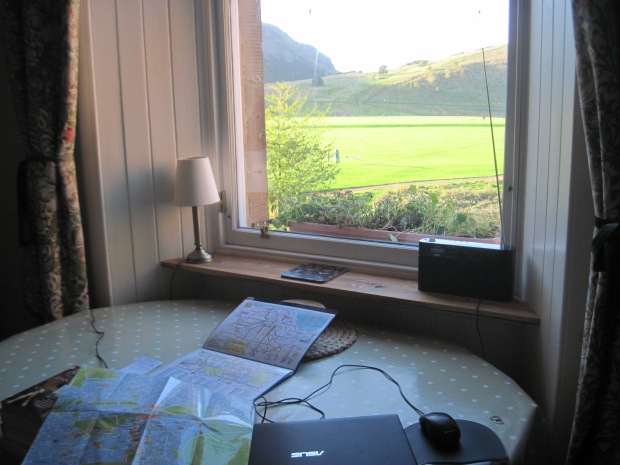 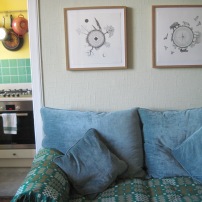 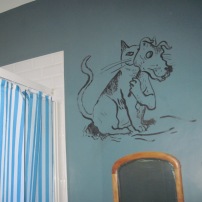 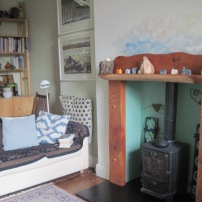 On Clare’s recommendation I started with the Surgeons’ Hall Museums on the Royal College of Surgeons campus. They have several collections covering the history of surgery, dentistry, and pathology specimens. Many of the names and developments were familiar to me from Lindsey Fitzharris’s The Butchering Art. Joseph Lister’s frock coat is on display, and in one corner rare video footage plays of Sir Arthur Conan Doyle (who was initially a practicing physician) explaining how he based Sherlock Holmes on his university mentor, Joseph Bell. 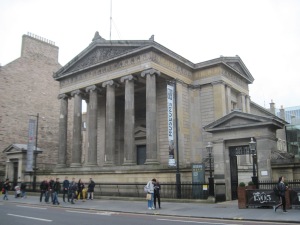 It’s not a place for the squeamish as there are mummified skeletons, details about Burke and Hare’s grave-robbing, surgical tools, and tumors and other anatomical deformities in jars everywhere. I found it all fascinating and spent a good two hours poking around. My favorite bits were the case full of foreign bodies removed from noses, stomachs and intestines and the temporary exhibition, “A Quest for Healing” by Zhang Yanzi, who had a residency at the museums in the summer of 2017. Her pieces included a 2D mountain made of pill packets, a cotton and gauze sculpture bristling with acupuncture needles, a matching hanging sculpture of capillaries, two surgical beds, and various silk screen panels.

The pathology museum, spread across two floors, was a little overwhelming and almost distressingly faceless – so many human beings reduced to the conditions that had defined and perhaps killed them. The most striking specimen for me, then, was one that actually included a face. I think it was a First World War soldier whose nose had been sewn back together, and what was so remarkable was that you could see his ginger whiskers and eyebrows, and his eyes were closed as if he was just taking a nap. (For ever. In a museum case.) 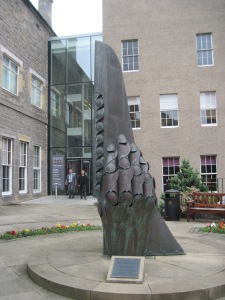 The sculpture outside is From Here Health by Denys Mitchell (1994).

There are only explanatory panels about a select few samples, so it can be hard to spot just what’s wrong with the organs unless you have specialist medical knowledge. I appreciated the few places where notes have been added along the lines of “see your doctor if…” There were four polycystic kidneys on display in various cases, so including mine there were at least six present in the building that day. “More lives would be saved if more people carried kidney donor cards,” one caption read. Amen.

Clare also recommended the university area for its charity shops. I had a good trawl around Nicolson Street and bought one book, but a lot of the shops are geared towards vintage and High Street fashion. I had better luck at the Salvation Army store on Forrest Road (near the National Museum), where I found three books and two classical CDs. 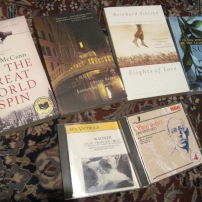 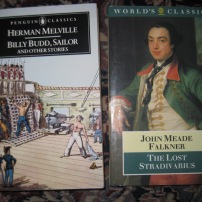 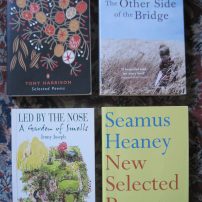 On to the Writers’ Museum, which commemorates Robert Burns, Sir Walter Scott and Robert Louis Stevenson. I was most interested in the Stevenson material, including memorabilia from his later life on Samoa, especially as I’m currently reading a novel about his relationship with the American divorcee Fanny Osbourne. By now I was museum-ed out and headed back to the flat for a leftovers dinner and some reading before an early bedtime. 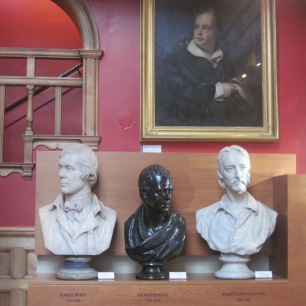 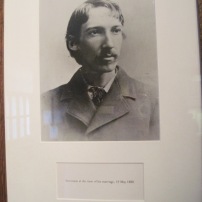 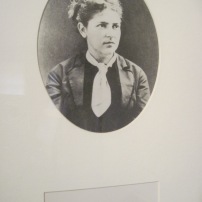 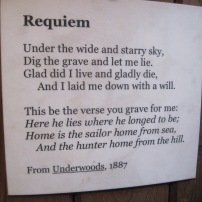 RLS’s epitaph, from his own poem.

Day 3, Friday the 21st: Another morning of work followed by an afternoon of wandering on foot between free attractions and charity shops and avoiding the drizzle. I visited the unusual Scottish Parliament building (which cost a cool £414 million) and saw inside the debating chamber. Four books from the Lothian Cat Rescue charity shop; quick jaunts around the Museum of Childhood, the Museum of Edinburgh, Canongate Kirk, the Music Museum, and the Central Library. When it came to it I couldn’t be bothered to pay £14 to go around Holyrood Palace, but I enjoyed a reasonably priced cappuccino and carrot cake at their café. Chris was back in the evening for a dinner of frozen pizza with local beer and cider. 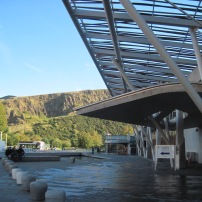 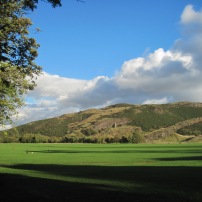 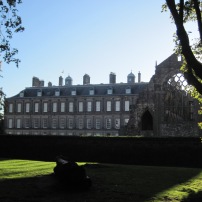 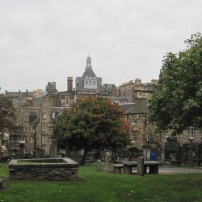 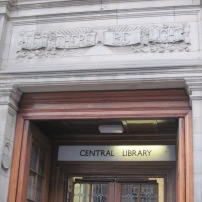 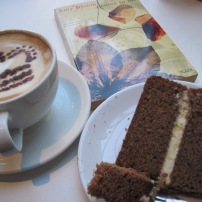 Day 4, Saturday the 22nd: Our one full day in the City together. We weren’t feeling up to the Arthur’s Seat walk, so we did a gentle stroll up the Salisbury Crags and back instead. Then we caught a bus out to the Stockbridge area for more charity shopping (two more books) and a scrumptious brunch at The Pantry. This was a recommendation on chef David Lebovitz’s food blog and it more than lived up to expectations. It’s no wonder we had to wait half an hour for a table. I could have eaten anything on the menu, but in the end I had smoked salmon eggs Benedict followed by a cherry and Nutella brownie. 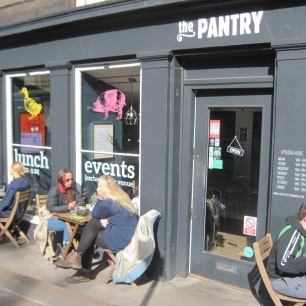 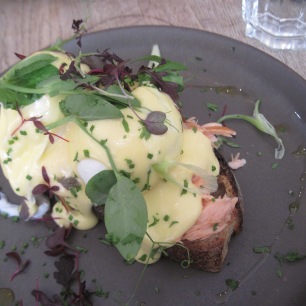 After a brief browse at Golden Hare Books, we went on along the Water of Leith to the lovely Royal Botanic Garden. It’s free to walk around, but we also paid to tour the Glasshouses, which recreate the flora of 10 different climates. The RBG is also home to the National Memorial for Organ and Tissue Donors, a peaceful circular space set back in the woods and marked out by a few benches and stone monuments. As I have organ donors to thank for the continued life and health of my mother and several other relatives, it was well worth a visit. 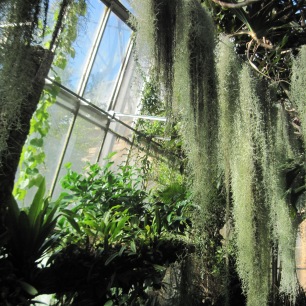 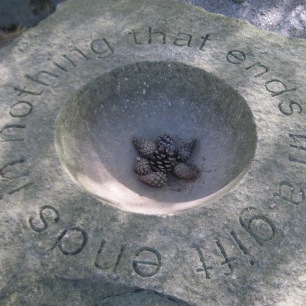 Part of the Organ Donors memorial.

Back into town for gelato (I had a delicious poached plum and cinnamon sorbet) at Mary’s Milk Bar, which is on Grassmarket across from the Castle and was another Lebovitz recommendation. A quick circuit of the animal hall at the National Museum before it closed, a stroll along the Royal Mile, and a rest with tea and books back at the flat before going back out for a veggie curry. 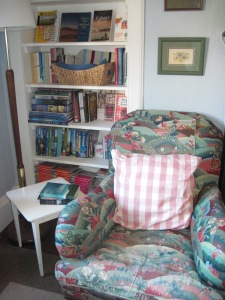 Day 5, Sunday the 23rd: Return travel day. No major issues, but still enough of a delay to apply for compensation – refunds from LNER and my husband’s work will have made the journey very cheap indeed.

I was sad to leave Edinburgh this time. I loved our Airbnb flat and felt very at home in it. If I had a bicycle to get into town a little faster, I could easily live there. The tourists would probably drive me mad, but Edinburgh is a wonderful place with so much to see and do and such incredible scenery within a short drive.

Thank you to everyone who offered suggestions of what to see and do. I managed to fit in most of what you recommended!

The bulk of Unsheltered, Barbara Kingsolver’s bold new novel about distrust and displacement in America then (the 1870s) and now (during the rise of Trump), and Come to Me by Amy Bloom, a wonderful story collection about people who love who they shouldn’t love. More about this one in my upcoming round-up of short stories I’ve read this month. 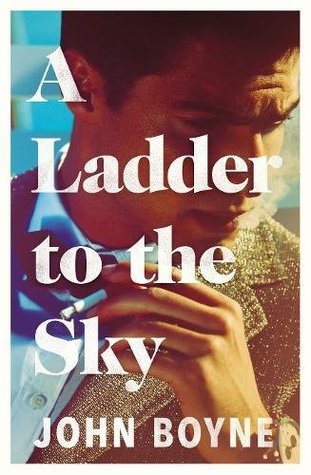 A Ladder to the Sky by John Boyne is a delicious piece of literary suspense with a Tom Ripley-like hero you’ll love to hate: Maurice Swift, who wants nothing more than to be a writer but doesn’t have any ideas of his own, so steals them from other people. I loved how we see this character from several outside points of view – first Erich Ackerman, whose Nazi-era history provides the basis for Maurice’s first novel; then Gore Vidal, to whose Italian home Maurice pays a visit with his new mentor; and finally Maurice’s wife Edith, a celebrated author in her own right – before getting Maurice’s own perspective. By this point we know enough about him to understand just how unreliable a narrator he is. My one criticism is that I would have binned the whole subplot about Edith’s sister and brother-in-law. (A nice touch: at one point Maurice buys a reprint copy of Maude Avery’s Like to the Lark, which should ring a bell from The Heart’s Invisible Furies.) 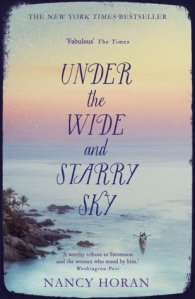 I also read over half of Jenny Diski’s Stranger on a Train, a memoir about two long train journeys she took across America in the late 1990s that also incorporates memories from a troubled adolescence – she started smoking at 14 and was in and out of mental hospitals at 15 – in which she loved nothing more than to read while riding the Circle line all day long. I’m a quarter of the way through both Nancy Horan’s Under the Wide and Starry Sky, about Stevenson and his wife, and Peter Hill’s Stargazing, a memoir about dropping out of art school to become a Scottish lighthouse keeper in 1973; he started on Pladda, a tiny island off of Arran. And on my Nook I read a good bit of All You Can Ever Know, Nicole Chung’s forthcoming memoir about being raised by adoptive white parents in Oregon and meeting members of her Korean family in her mid-twenties, just as she became a mother herself.