Imitation Is the Sincerest Form of Flattery: Costello, O’Shaughnessy & Smyth

These three books – two novels and a memoir – pay loving tribute to a particular nineteenth- or twentieth-century writer. In each case, the author incorporates passages of pastiche, moving beyond thematic similarity to make their language an additional homage.

Although I enjoyed the three books very much, they differ in terms of how familiar you should be with the source material before embarkation. So while they were all

reads for me, I have added a note below each review to indicate the level of prior knowledge needed.

The River Capture by Mary Costello

Luke O’Brien has taken a long sabbatical from his teaching job in Dublin and is back living at the family farm beside the river in Waterford. Though only in his mid-thirties, he seems like a man of sorrows, often dwelling on the loss of parents, aunts and romantic relationships with both men and women. He takes quiet pleasure in food, the company of pets, and books, including his extensive collection on James Joyce, about whom he’d like to write a tome of his own. The novel’s very gentle crisis comes when Luke falls for Ruth and it emerges that her late father ruined his beloved Aunt Ellen’s reputation.

At this point a troubled Luke is driven into 100+ pages of sinuous contemplation, a bravura section of short fragments headed by questions. Rather like a catechism, it’s a playful way of organizing his thoughts and likely more than a little Joycean in approach – I’ve read Portrait of the Artist and Dubliners but not Ulysses or Finnegans Wake, so I feel less than able to comment on the literary ventriloquism, but I found this a pleasingly over-the-top stream-of-consciousness that ranges from the profound (“What fear suddenly assails him? The arrival of the noonday demon”) to the scatological (“At what point does he urinate? At approximately three-quarters of the way up the avenue”).

While this doesn’t quite match Costello’s near-perfect novella, Academy Street, it’s an impressive experiment in voice and style, and the treatment of Luke’s bisexuality struck me as sensitive – an apt metaphorical manifestation of the novel’s focus on fluidity. (See also Susan’s excellent review.)

Why Joyce? “integrity … commitment to the quotidian … refusal to take conventions for granted”

Also recommended: The Sixteenth of June by Maya Lang

In Love with George Eliot by Kathy O’Shaughnessy

Many characters, fictional and historical, are in love with George Eliot over the course of this debut novel by a literary editor. The whole thing is a book within a book – fiction being written by Kate, an academic at London’s Queen Elizabeth College who’s preparing for two conferences on Eliot and a new co-taught course on life writing at the same time as she completes her novel, which blends biographical information and imagined scenes. 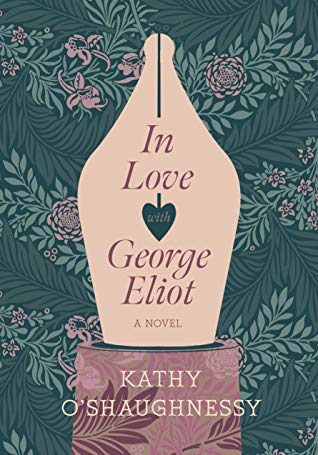 1857: Eliot is living with George Henry Lewes, her common-law husband, and working on Adam Bede, which becomes a runaway success, not least because of speculation about its anonymous author. 1880: The great author’s death leaves behind a mentally unstable widower 20 years her junior, John Walter Cross, once such a close family friend that she and Lewes called him “Nephew.”

Between these points are intriguing vignettes from Eliot’s life with her two great loves, and insight into her scandalous position in Victorian society. Her estrangement from her dear brother (the model for Tom in The Mill on the Floss) is a plangent refrain, while interactions with female friends who have accepted the norms of marriage and motherhood reveal just how transgressive her life is perceived to be.

In the historical sections O’Shaughnessy mimics Victorian prose ably, yet avoids the convoluted syntax that can make Eliot challenging. I might have liked a bit more of the contemporary story line, in which Kate and an alluring colleague make their way to Venice (the site of Eliot’s legendarily disastrous honeymoon trip with Cross), but by making this a minor thread O’Shaughnessy ensures that the spotlight remains on Eliot throughout.

Highlights: A cameo appearance by Henry James; a surprisingly sexy passage in which Cross and Eliot read Dante aloud to each other and share their first kiss.

Why Eliot? “As an artist, this was her task, to move the reader to see people in the round.”

Also recommended: 142 Strand by Rosemary Ashton, Sophie and the Sibyl by Patricia Duncker, and My Life in Middlemarch by Rebecca Mead

With thanks to Scribe UK for the free copy for review.

All the Lives We Ever Lived: Seeking Solace in Virginia Woolf by Katharine Smyth

Smyth first read To the Lighthouse in Christmas 2001, during her junior year abroad at Oxford. Shortly thereafter her father had surgery in Boston to remove his bladder, one of many operations he’d had during a decade battling cancer. But even this new health scare wasn’t enough to keep him from returning to his habitual three bottles of wine a day. Woolf was there for Smyth during this crisis and all the time leading up to her father’s death, with Lighthouse and Woolf’s own life reflecting Smyth’s experience in unanticipated ways. The Smyths’ Rhode Island beach house, for instance, was reminiscent of the Stephens’ home in Cornwall. Woolf’s mother’s death was an end to the summer visits, and to her childhood; Lighthouse would become her elegy to those bygone days.

Often a short passage by or about Woolf is enough to launch Smyth back into her memories. As an only child, she envied the busy family life of the Ramsays in Lighthouse. She delves into the mystery of her parents’ marriage and her father’s faltering architecture career. She also undertakes Woolf tourism, including the Cornwall cottage, Knole, Charleston and Monk’s House (where Woolf wrote most of Lighthouse). Her writing is dreamy, mingling past and present as she muses on time and grief. The passages of Woolf pastiche are obvious but short enough not to overstay their welcome; as in the Costello, they tend to feature water imagery. It’s a most unusual book in the conception, but for Woolf fans especially, it works. However, I wished I had read Lighthouse more recently than 16.5 years ago – it’s one to reread.

Why Woolf? “I think it’s Woolf’s mastery of moments like these—moments that hold up a mirror to our private tumult while also revealing how much we as humans share—that most draws me to her.”

Undergraduate wisdom: “Woolf’s technique: taking a very complex (usually female) character and using her mind as an emblem of all minds” [copied from notes I took during a lecture on To the Lighthouse in a “Modern Wasteland” course during my sophomore year of college]

Also recommended: Virginia Woolf in Manhattan by Maggie Gee, Vanessa and Her Sister by Priya Parmar, and Adeline by Norah Vincent

With thanks to Atlantic Books for the free copy for review.