I don’t often read anything that could be classed as suspense or horror, so the R.I.P. challenge is a fun excuse to dip a toe into these genres each year. This year I have an eerie relationship study, a dystopian scenario where cannibalism has become the norm, some traditional ghost stories old and new, and a bonus story encountered in an unrelated anthology. 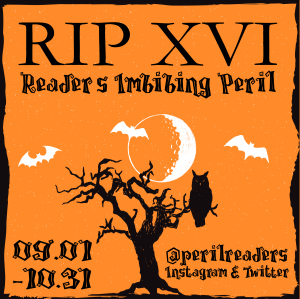 Laurie’s life is thrown off kilter when, after they’ve been together 15 years, her husband Mark disappears one day, taking nothing with him. She continues in her job as a cleaner on a university campus in northwest England. After work she visits her father, who is suffering from dementia, and his Ukrainian carer Olena. In general, she pretends that nothing has happened, caring little how odd it will appear that she didn’t call the police until Mark had been gone for five weeks. Despite her obsession with true crime podcasts, she can’t seem to imagine that anything untoward has happened to him. What happened to Mark, and what’s with that spooky spare room in their flat that Laurie won’t let anyone enter? 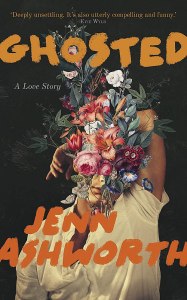 If you find unreliable narrators delicious, you’re in the right place. The mood is confessional, yet Laurie is anything but confiding. Occasionally she apologizes for her behaviour: “I realise this does not sound very sane” is one of her concessions to readers’ rationality. So her drinking problem doesn’t become evident until nearly halfway through, and a bombshell is still to come. It’s the key to understanding our protagonist and why she’s acted this way.

Ghosted wasn’t what I expected. Its air of supernatural menace mellows; what is to be feared is much more ordinary. The subtitle should have been more of a clue for me. I appreciated the working class, northern setting (not often represented; Ashworth is up for this year’s Portico Prize) and the unusual relationships Laurie has with Olena, as well as with co-worker Eddie and neighbour Katrina. Reminiscent of Jo Baker’s The Body Lies and Sue Miller’s Monogamy, this story of a storm-tossed marriage was a solid introduction to Ashworth’s fiction – this is her fifth novel – but I’m not sure the payoff lived up to that amazing cover.

With thanks to Sceptre for the free copy for review.

[Translated from the Spanish by Sarah Moses] 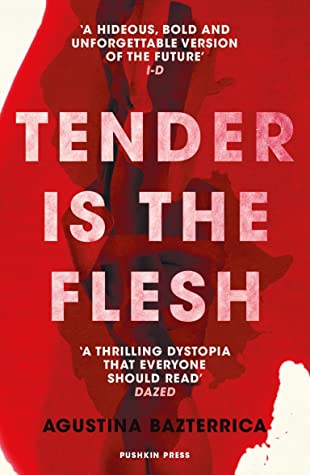 This sledgehammer of a short Argentinian novel has a simple premise: not long ago, animals were found to be infected with a virus that made them toxic to humans. During the euphemistic “Transition,” all domesticated and herd animals were killed and the roles they once held began to be filled by humans – hunted, sacrificed, butchered, scavenged, cooked and eaten. A whole gastronomic culture quickly developed around cannibalism.

Marcos is our guide to this horrific near-future world. Although he works in a slaughterhouse, he’s still uneasy with some aspects of the arrangement. The standard terminology is an attempt at dispassion: the “heads” are “processed” for their “meat.” Smarting from the loss of his baby son and with his father in a nursing home, Marcos still has enough compassion that when he’s gifted a high-quality female he views her as a person rather than potential cuts of flesh. His decisions from here on will call into question his loyalty to the new system.

I wondered if there would come a point where I was no longer physically able to keep reading. But it’s fiendishly clever how the book beckons you into analogical situations and then forces you to face up to cold truths. It’s impossible to avoid the animal-rights message (in a book full of gruesome scenes, the one that involves animals somehow hit hardest), but I also thought a lot about how human castes might work – dooming some to muteness, breeding and commodification, while others are the privileged overseers granted peaceful ends. Bazterrica also conflates sex and death in uncomfortable ways. In one sense, this was not easy to read. But in another, I was morbidly compelled to turn the pages. Brutal but brilliant stuff. (Public library/Edelweiss)

Fear: Tales of Terror and Suspense, selected by Roald Dahl (2017)

I reviewed the five female-penned ghost stories for R.I.P. back in 2019. This year I picked out another five, leaving a final four for another year. (Review copy)

“W.S.” by L.P. Hartley: The only thing I’ve read of Hartley’s besides The Go-Between. Novelist Walter Streeter is confronted by one of his characters, to whom he gave the same initials. What’s real and what’s only going on in his head? Perfectly plotted and delicious.

“In the Tube” by E.F. Benson: The concept of time is called into question when someone witnesses a suicide on the London Underground some days before it could actually have happened. All recounted as a retrospective tale. Believably uncanny.

“Elias and the Draug” by Jonas Lie: A sea monster and ghost ship plague Norwegian fishermen.

“The Ghost of a Hand” by J. Sheridan Le Fanu: A disembodied hand wreaks havoc in an eighteenth-century household.

“On the Brighton Road” by Richard Middleton: A tramp meets an ill boy on a road in the Sussex Downs. A classic ghost story that pivots on its final line. 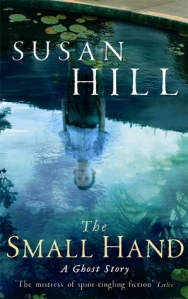 This was my fourth of Hill’s classic ghost stories, after The Woman in Black, The Man in the Picture and Dolly. They’re always concise and so fluently written that the storytelling voice feels effortless. I wondered if this one might have been inspired by “The Ghost of a Hand” (above). It doesn’t feature a disembodied hand, per se, but the presence of a young boy who slips his hand into antiquarian book dealer Adam Snow’s when he stops at an abandoned house in the English countryside, and again when he goes to a French monastery to purchase a Shakespeare First Folio. Each time, Adam feels the ghost is pulling him to throw himself into a pond. When Adam confides in the monks and in his brother, he gets different advice. A pleasant and very quick read, if a little predictable. (Free from a neighbour)

And a bonus story:

Carmen Maria Machado’s “The Lost Performance of the High Priestess of the Temple of Horror” appears in Kink (2021), a short story anthology edited by Garth Greenwell and R.O. Kwon. (I requested it from NetGalley just so I could read the stories by Machado and Brandon Taylor.) It opens “I would never forget the night I saw Maxa decompose before me.” A seamstress, obsessed with an actress, becomes her dresser. Set in the 19th-century Parisian theatre world, this pairs queer desire and early special effects and is over-the-top sensual in the vein of Angela Carter, with hints of the sadomasochism that got it a place here.

Sample lines: “Women seep because they occupy the filmy gauze between the world of the living and the dead.” & “Her body blotted out the moon. She was an ambulatory garden, a beacon in a dead season, life where life should not grow.”

Also counting the short stories by Octavia E. Butler and Bradley Sides, I did some great R.I.P. reading this year! I think the book that will stick with me the most is Tender Is the Flesh.