In the past couple of weeks, we’ve taken advantage of the last gasp of summer with some rare chances at socializing, outdoors and in. Our closest friends came to visit us last weekend and accompanied us to a beer festival held in a local field, and this weekend we’ve celebrated birthdays with a formal-wear party at a local arts venue and a low-key family meal.

The only sunflower the slugs didn’t eat.

Scrubbed up nicely for a party.

After my first installment of summer reads, I’ve also finished Klara and the Sun (a bust with me, alas) and the three below: a wildlife photographer’s memoir of lockdown summer spent filming in the New Forest, a record of searching for the summer’s remnants of snow in the Highlands, and an obscure 1950s novel about the psychological connections between four characters in one Irish summer. I close with a summer-into-autumn children’s book.

Goshawk Summer: A New Forest Season Unlike Any Other by James Aldred (2021)

My second nature book about the New Forest this year (after The Circling Sky by Neil Ansell) has only sharpened my hankering to get back there and have a good wander after many years away. In March 2020, Aldred had recently returned from filming cheetahs in Kenya when the UK went into its first national lockdown. He had the good fortune to obtain authorization from Forestry England that allowed him to travel regularly from his home in Somerset to the New Forest to gather footage for a documentary for the Smithsonian channel.

Zooming up on empty roads and staying in local cottages so he can start at 4 each morning, he marvels at the peace of a place when humans are taken out of the equation. His diary chronicles a few months of extraordinary wildlife encounters – not only with the goshawks across from whose nest he built a special treetop platform, but also with dragonflies, fox cubs, and rare birds like cuckoo and Dartford warbler. The descriptions of animal behaviour are superb, and the tone is well balanced: alongside the delight of nature watching is anger at human exploitation of the area after the reopening and despair at seemingly intractable declines – of 46 curlew pairs in the Forest, only three chicks survived that summer.

Despite the woe at nest failures and needless roadkill, Aldred is optimistic – in a similar way to Ansell – that sites like the New Forest can be a model of how light-handed management might allow animals to flourish. “I believe that a little space goes a long way and sometimes all we really need to do is take a step back to let nature do its thing. … It is nature’s ability to help itself, to survive in spite of us in fact, that gives me tentative hope”. (Unsolicited review copy)

With thanks to Elliott & Thompson for the free copy.

Among the Summer Snows by Christopher Nicholson (2017)

After the death from cancer of his wife Kitty, a botanical illustrator, Nicholson set off for Scotland’s Cairngorms and Ben Nevis in search of patches of snow that persist into summer. “Summer snow is a miracle, a piece of out-of-season magic: to see it is one thing, to make physical contact with it is another.” His account of his travels washed over me, leaving little impression. I appreciated the accompanying colour photographs, as the landscape is otherwise somewhat difficult to picture, but even in these it is often hard to get a sense of scale. I think I expected more philosophical reflection in the vein of The Snow Leopard, and, while Nicholson does express anxiety over what happens if one day the summer snows are no more, I found the books on snow by Charlie English and Marcus Sedgwick more varied and profound. (Secondhand, gifted) 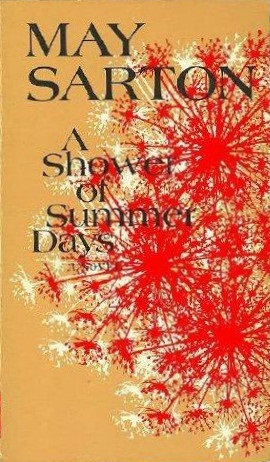 Although I’m more a fan of Sarton’s autobiographical material, especially her journals, I’ve also enjoyed exploring her fiction. This was my seventh of her novels. It’s set in Ireland at Dene’s Court, the grand house Violet inherited. She and her husband Charles have lived in Burma for two decades, but with the Empire on the wane they decide to settle in Violet’s childhood home. Gardening and dressing for dinner fill their languid days until word comes that Violet’s 20-year-old niece, Sally, is coming to stay.

The summer is meant to cure Sally of her infatuation with an actor named Ian. Violet reluctantly goes along with the plan because she feels so badly about the lasting rivalry with her sister, Barbara. Sally is a “bolt of life” shaking up Violet and Charles’s marriage, and when Ian, too, flies out from America, a curious love triangle is refashioned as a quadrilateral. The house remains the one constant as the characters wrestle with their emotional bonds (“the kaleidoscope of feelings was being rather violently shaken up”) and reflect on the transitory splendour of the season (“a kind of timelessness, the warm sun in the enclosed garden in the morning, the hum of bees, and the long slow twilights”). This isn’t one of my favourites from Sarton, but it has low-key charm. I saw it as being on a continuum from Virginia Woolf to Tessa Hadley (e.g. The Past) via Elizabeth Bowen. (Secondhand purchase from Awesomebooks.com)

And finally, one for the seasons’ transition:

A child and dog pair set out from home, through the woods, by a river, and into town, greeting other creatures and marking the signs of the season. “Hello!” the beavers reply. “We have no time to play because we’re making cozy nests and dens. It will be cold soon, and we want to get ready.” The quaint Americana setting and papercut-style illustrations reminded me of Vermont college towns and Jon Klassen’s work. I liked the focus on nature. (Free from a neighbour)

What books are accompanying you from summer into autumn this year?