Is Life a Narrative? (via Three Quotes)

I discovered two opposing approaches to life and the self in a chapter on Lucian Freud in Keeping an Eye Open: Essays on Art by Julian Barnes. (For increased readability I’ve divided the following passage into short paragraphs and added my own emphasis.)

In one version of the philosophy of the self, we all operate at some point on a line between the twin poles of episodicism and narrativism. The distinction is existential, not moral.

Episodicists feel and see little connection between the different, unfolding parts of their life, have a more fragmentary sense of self, and tend not to believe in the concept of free will.

Narrativists feel and see constant connectivity, an enduring self, and acknowledge free will as the instrument that forges their self and their connectedness.

Narrativists feel responsibility for their actions and guilt over their failures; episodicists think that one thing happens and then another thing happens.

Freud is Barnes’s example of a typical episodicist: someone who sees life as a series of random events. I’ve always been the opposite. Maybe it’s because I read so many novels, memoirs and biographies, but I like to think of life as having a shape and a meaning, of one thing leading to another or prefiguring something else and so on.

However, when I look back, so many aspects of my recent life – a Master’s degree that never led to related work, six years of working at entry level in libraries without being able to advance, and living in 10 different places over the past 10 years – seem meaningless. I didn’t become an academic or a librarian, and my husband’s and my (usually) enforced nomadism was at odds with my desire to feel I was settled somewhere and truly belonged. It all looks like false starts, missteps and failures.

I encountered a Cormac McCarthy quote some years back (but now can’t find it again for the life of me), something to the effect of: we tell ourselves that life is a coherent story so as to trick ourselves into believing it means something. That’s overly depressing and nihilistic, I think (well, it is McCarthy!), as the urge to make a meaningful story out of life is surely a fundamentally human one. But would I be better off thinking of life as random?

Another quote that really challenges me is this one from Eckhart Tolle: “When you become comfortable with uncertainty, infinite possibilities open up in your life.” Uncertainty feels threatening to me. I like to know where things are going and why. Yet if I could just turn my thinking around and welcome all that randomness could offer, would life feel more open-ended and exciting?

Are you a “narrativist” or an “episodicist”?

“They say books about books are profitless, but they certainly make very pleasant reading.”

A Book Addict’s Treasury by Julie Rugg and Lynda Murphy was my bedside book for the first half of the year. I like having a literary-themed book to read a bit of daily, rather like a secular devotional. Last year John Sutherland and Stephen Fender’s Love, Sex, Death and Words filled that purpose. The authors have chosen a huge variety of quotations from fiction and nonfiction, ranging from the Middle Ages to the present day. The chapters are loosely thematic, with topics like lending and borrowing, organizing one’s library, bad book habits, and so on.

Here’s a sampling of the quotes that meant the most to me: 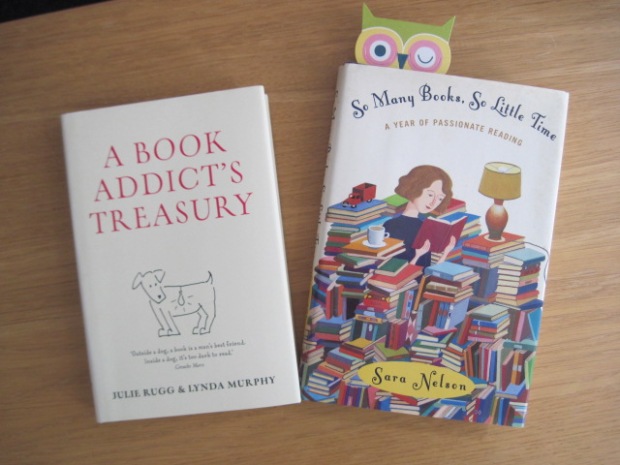 I also came across two controversial reader habits I’m not sure how I feel about:

1. “The outward and visible mark of the citizenship of the book-lover is his book-plate.” (Edmund Gosse)

I do have two packs of book-plates featuring a rather nice black-and-white engraving of a puffin on a rock, but I’ve never used them. For one thing, my collection seems too changeable: what if I decide, after reading a book, to resell it or pass it on to someone else? I also wouldn’t know how to choose which lucky 20 books get a bookplate. (Probably only those monolithic hardbacks I’m sure to keep as reference books for decades to come.)

I’ve never annotated my books, apart from a few textbooks in college. It just seems like defacement; are my thoughts really so important that they need to be preserved forever? Instead I use Post-It flags to mark passages I want to revisit, and usually copy those out into my annual book list (a huge Word file).

My current bedside book fit for a bibliophile is So Many Books, So Little Time: A Year of Passionate Reading by Sara Nelson. Favorite quote so far:

“Part of the appeal of books, of course, is that they’re the cheapest and easiest way to transport you from the world you know into one you don’t. … dollar for dollar, hour per hour, it’s the most expedient way to get from our proscribed little ‘here’ to an imagined, intriguing ‘there.’”

What are your favorite book-related quotes? Do you use bookplates and annotations?

My Life in Book Quotes

I keep an ongoing Word file with details on my year’s reading: books finished with the date, number of pages, and source – similar information to what’s recorded on Goodreads – plus any quotations that particularly stood out to me. It occurred to me that by looking back through these annual book lists for the quotes that meant the most to me I could probably narrate my recent years. So here are the 2015–2016 quotes that tell my story.

“I’m learning that what’s important is not so much what I do to make a living as who I become in the process. … the heroine, when at a juncture, makes her own choice—the nonheroine lets others make it for her.”

(A Year by the Sea: Thoughts of an Unfinished Woman, Joan Anderson)

“The dishes. The dishes! The goddamn dishes! No wonder women don’t succeed.”

(The author’s mother’s explosion in The Year My Mother Came Back, Alice Eve Cohen)

“Success says, What more can I get?

Craft says, Can you believe I get to do this?”

(How to Be Here: A Guide to Creating a Life Worth Living, Rob Bell)

“Amateurs look for inspiration; the rest of us just get up and go to work.”

“In Orcadian, ‘flitting’ means ‘moving house’. I can hear it spoken with a tinge of disapproval or pity: the air-headed English couple who couldn’t settle.”

“Where, after we have made the great decision to leave the security of childhood and move on into the vastness of maturity, does anybody ever feel completely at home?”

(A Circle of Quiet, Madeleine L’Engle)

“there is no such thing / as the right route or a clear passage / no matter where you start, / or how you plan it.”

“He had accepted that if you were a bookish person the events in your life took place in your head.”

“my way of seeing has always been different, shyer. To see the world I’ve always opened a book.”

(The Violet Hour: Great Writers at the End, Katie Roiphe)

“Other people’s lives, and the lives I read about in books, seem richer, mine seems so threadbare.”

(The Past, Tessa Hadley)

“She remembered finding her first white hair somewhere near her thirtieth birthday and it had sent her on a tailspin for half a day. It’s starting, she’d thought then. The follicle that produced that hair is dying. I’ve reached the tipping point and from now on it’s nothing but slow decline.”

“All the most terrifying Ifs involve people. All the good ones do as well.”

“I wished then, and still do, that there was something in me also that would march steadily in one road, instead of down here or there or somewhere else, the mind running a net of rabbit-paths that twisted and turned and doubled on themselves, pursued always by the hawk-shadow of doubt.”

(Now in November, Josephine Johnson – to be reviewed here within next couple weeks)