Only two months since my last Book Serendipity entry, and already another 17 occurrences! I post these occasional reading coincidences on Twitter and/or Instagram. I call it serendipitous when two or more books that I’m reading at the same time or in quick succession have something pretty bizarre in common. Because I have so many books on the go at once – usually between 10 and 20 – I guess I’m more prone to such incidents. What’s the weirdest one you’ve had lately? (The following are in rough chronological order.)

Memoirs of adoption and a life steeped in trauma and sex; a metafictional mystery about an inscrutable artist and his would-be biographer; and a European graphic novel about a thief. You can’t say I don’t read a wide variety of books! See if one or more of these can tempt you.

The Ginger Child: On Family, Loss and Adoption by Patrick Flanery

Patrick Flanery is a professor of creative writing at Queen Mary University of London and the author of four novels. In his first nonfiction book, he chronicles the arduous four-year journey he and his husband took to try and become parents. For a short time they considered surrogacy, but it’s so difficult in the UK that they switched tracks to domestic adoption.

The resulting memoir is a somber, meditative book that doesn’t gloss over the difficulties of queer family-making, but also sees some potential advantages: to an extent, one has the privilege of choice – he and Andrew specified that they couldn’t raise a child with severe disabilities or trauma, but were fine with one of any race – whereas biological parents don’t really have any idea of what they’re going to get. However, same-sex couples are plagued by bureaucracy and, yes, prejudice still. Nothing comes easy. They have to fill out a 50-page questionnaire about their concerns and what they have to offer a child. A social worker humiliates them by forcing them to do a dance-off video game to prove that a pair of introverted, cultured academics can have fun, too.

Eventually there’s a successful match and they have tentative meetings with four-year-old O—, his parents’ fifth child, now in foster care. But this is not a blithe story of everything going right. I enjoyed the glimpses of Flanery’s growing-up years in Nebraska and the occasional second-person address to O—, but there is a lot more theory and cultural criticism than I expected, and much of the film talk, at least, feels like irrelevant asides.

With thanks to Atlantic Books for the free copy for review.

The Unauthorised Biography of Ezra Maas by Daniel James

This is a twisty, clever meta novel about “Daniel James” desperately trying to write a biography of Ezra Maas, an enigmatic artist who grew up a child prodigy in Oxford and attracted a cult following in 1960s New York City, where he was a friend of Warhol et al. But, with rumors abounding that The Maas Foundation is preparing to announce Ezra’s death in 2011, James finds that his subject’s story keeps shifting shape and even disappearing around him – as one interviewee tells him, “Maas is a black hole. His presence draws everything in, warps, destroys, changes, and rewrites it.”

The book’s epistolary style deftly combines fragments of various document types: James’s biography-in-progress and an oral history he’s assembled from conversations with those who knew Maas, his narrative of his quest, transcripts of interviews and phone conversations, e-mails and more. All of this has been brought together into manuscript form by an anonymous editor whose presence is indicated through coy but increasingly tiresome long footnotes.

Look at the sort of authors who get frequent mentions in the footnotes, though, and you’ll get an idea of whether this might appeal to you: Paul Auster, Samuel Beckett, George Orwell and Thomas Pynchon. I enjoyed the noir atmosphere – complete with dream sequences and psychiatric evaluations – and the way that James the “writer-detective” has to careen around Europe and America looking for answers; it all feels rather like a superior Jason Bourne film.

My thanks to the author for sending a free signed copy for review.

[translated from the French by Edward Gauvin] 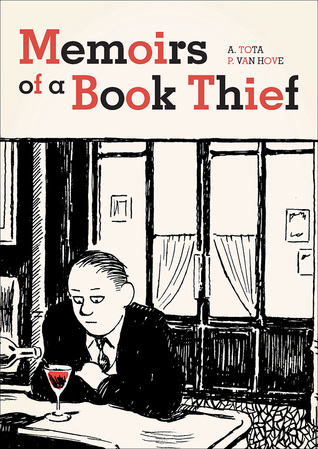 In April 1953, Daniel Brodin translates an obscure Italian poem in his head to recite at a poetry reading but, improbably, someone recognizes it. Soon afterwards, he’s also caught stealing a book from a shop. Just a little plagiarism and shoplifting? It might have stayed that way until he met Gilles and Linda, fellow thieves, and their bodyguard, Jean-Michel, a big blond goon with Gérard Dépardieu’s nose and haircut. Now he’s known as “Klepto” and is part of a circle that drinks at the Café Sully and mixes with avant-garde and Existentialist figures. He’s content with being a nobody and writing his memoirs (the book within the book) – until Jean-Michel makes him a proposition.

The book is entirely in black and white, which makes it seem unfinished, and the style is a little grotesque. For instance, Brodin is almost always depicted with beads of sweat rolling off his head. The intricate outdoor scenes were much more to my taste than the faces. The plot is also slightly thin and the ending abrupt. So, compared with many other graphic novels, this is not one I’m likely to recommend. 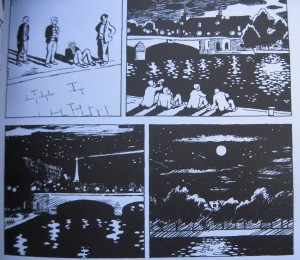 The Chronology of Water by Lidia Yuknavitch

This really blew me away. “Out of the sad sack of sad shit that was my life, I made a wordhouse,” Yuknavitch writes. Her nonlinear memoir ranges from her upbringing with an alcoholic, manic-depressive mother and an abusive father via the stillbirth of her daughter and her years of alcohol and drug use through to the third marriage where she finally got things right and allowed herself to feel love again after so much numbness. Reading this, you’re amazed that the author is still alive, let alone thriving as a writer.

Ken Kesey, who led a collaborative novel-writing workshop in which she participated in the late 1980s, once asked her what the best thing was that ever happened to her. Swimming, she answered, because it felt like the only thing she was good at. In the water she was at home and empowered. Kesey reassured her that swimming wasn’t her only talent: there is some truly dazzling writing here, veering between lyrical stream-of-consciousness and in-your-face informality.

There are so many vivid sequences, but two that stood out for me were cutting down a tree the Christmas she was four and the way her mother turned her teeth-chattering crisis into a survival game, and the drunken collision she had after her second ex-husband told her he was seeing a 23-year-old. With the caveat that this is extremely explicit stuff (the author is bisexual; there’s an all-female threesome and S&M parties), I would still highly recommend it to readers of Joan Didion, Anne Lamott and Maggie Nelson. The watery metaphor flowing through, as one woman learns to float free of what once threatened to drown her, is only part of what makes it unforgettable. You’ll marvel at what a memoir can do.

A couple of favorite passages: