If you’ve been celebrating Passover or gearing up for Easter this past week, you might be interested in picking up one of these three recent (or forthcoming) theology titles I’ve encountered. (See also the more extensive Easter reading list I compiled two years ago.) 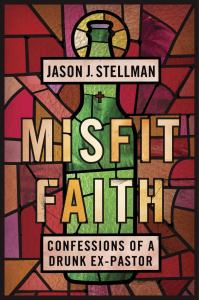 Stellman is a former pastor who runs a podcast called “Drunk Ex-Pastors” with his best friend and agnostic cohost, Christian Kingery. His book suffers a bit, I think, from an unclear aim: it started off as an apologia for his conversion to Catholicism after an unchurched upbringing and fervently Evangelical teen years. What it turned into is more of a theological ramble about how to see God and the world anew. For instance, God is Father, but also flesh, so we don’t need to condemn the secular: “embracing a Christianity that reflects the Incarnation by validating the physical world rather than vilifying it.”

With (dated, geeky) pop culture references, Stellman encourages a rejection of xenophobia and an embrace of narrative and ritual, which Roman Catholicism perhaps makes more space for than your average Protestant tradition. The last few lines of the book are a wonderful plea for openness, hearkening back to the very definition of ‘catholic’ – broad and inclusive:

Is misfit faith about love or suffering? Feasting or fasting? Divinity or humanity? Heaven or earth? The answer is yes, to all of it. And yeah, I want it all: the now and the later, the spirit and the flesh, the head, the heart, and the stations of the cross. I would rather embrace way too much than way too little, because something tells me that as wide as I can open my arms and heart, God’s are always open wider.

I’d recommend this to readers of David Dark and Rob Bell.

I received this e-book from Blogging for Books (via Edelweiss) for this review.

What Is the Bible? How an Ancient Library of Poems, Letters, and Stories Can Transform the Way You Think and Feel about Everything, Rob Bell 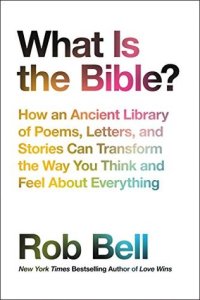 Speaking of Rob Bell…this is one of his stronger books. Not as fresh and vibrant as Velvet Elvis, but it will have a big impact on teens and twentysomethings starting to question the narrow interpretations of the Bible they’ve grown up with in conservative churches. Bell stresses the importance of reading the Bible literately rather than literally: always looking deeper than surface facts to see what’s really going on here; striving to understand the background of Jewish practice and Roman occupation at the time of Jesus.

Bell emphasizes that the Bible is a disparate set of books written by fallible people who were defined by their own historical context, yet if you ask why they wrote down these stories of their interactions with the divine in this way – why they mattered to them then – you might get a glimpse of why they might still matter to us now. The “haphazard humanity” of the Bible, then is for him stronger evidence of its reliability than some rigid perfection would be.

He chooses a number of the more unusual incidents in the Bible to illuminate with a closer reading, such as Jesus writing in the dust, Ehud assassinating tubby King Eglon, and the Book of Revelation. Part 4 is usefully structured around FAQs (e.g. “So how would you define the word of God? The creative action of God speaking in and through the world, bringing new creation and new life into being”). This is like listening to a really good sermon series. (Releases May 16th.) 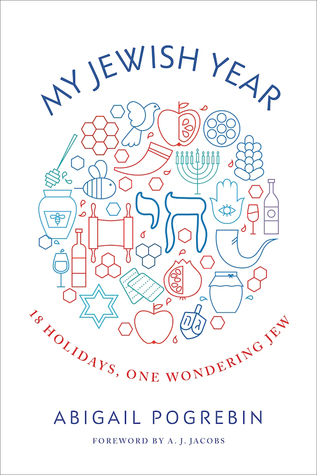 One thing Bell stresses is that Jesus was Jewish, so you can’t understand the stories about him apart from their Jewish context. This bighearted, open-minded book strikes me as a perfect model for how any person of faith should engage with their tradition: not just offering lip service and grudgingly showing up to a few services a year, but knowing what you believe and practice, and why.

Like many an American Jew, Pogrebin marked a limited set of holidays: Hanukkah, the Passover seder, Rosh Hashanah, Yom Kippur, and Shabbat. She circumcised her son, and hosted bar/bat mitzvahs for him and her daughter. Yet she had a nagging feeling that she had never genuinely locked into her own religion, and longed to go beyond the beginner stage.

So from September 2014 to September 2015, she celebrated all the holidays in the Jewish calendar, seeking to move beyond clichés and simplistic interpretations; interviewing rabbis and scholars of every stripe and reading Torah commentaries to discover meanings she’d missed before. Yom Kippur isn’t just a day of atonement; it’s for pondering the fact of your own death, taking stock of your life and asking what must change. Hanukkah, uncomfortably, is not just about persecution but about Jew-on-Jew violence.

There are opposite strands running through the Jewish ritual year: gratitude for survival (Purim) versus sorrow at tragedies (Holocaust Remembrance Day); feasting versus fasting. I was consistently impressed by how Pogrebin draws thematic connections and locates the resonance of religious ritual in her daily life.

“[I]t’s a quintessential Jewish act: seeking, grappling. If you’re reaching, it’s because you believe there’s something to grab hold of.”

“I’m beginning to think that Judaism is obsessed with brevity and instability. But rather than finding the message depressing, it’s clarifying.”

“Judaism is always asking us to apply epic stories to everyday decisions.”

“Judaism reminds us not to run from transitions, but to consecrate them.”