What a beautiful spring we’ve been having here. And, as usual, I’ve been reading with the seasons: some nature books about birdsong, flowers, etc., as well as a few books with “Spring” in the title. I have several more on the go that I’ll write up next month.

A Cold Spring by Elizabeth Bishop (1955) 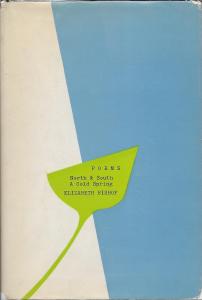 The second of Bishop’s four published collections, this mostly dwells on contrasts between city (e.g. “View of the Capitol from the Library of Congress,” “Varick Street” and “Letter to N.Y.”) and coastal locations (e.g. “The Bight,” “At the Fishhouses” and “Cape Breton”). The three most memorable poems for me were the title one, which opens the book; “The Prodigal,” a retelling of the Prodigal Son parable; and “Invitation to Miss Marianne Moore” (“From Brooklyn, over the Brooklyn Bridge, on this fine morning, please come flying,” with those last three words recurring at the end of each successive stanza; also note the sandpipers – one of her most famous poems was “Sandpiper,” from 1965’s Questions of Travel). I find that I love particular lines or images from Bishop’s poetry but not her overall style.

the violet was flawed on the lawn.

For two weeks or more the trees hesitated; 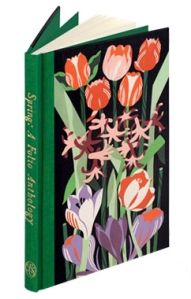 As a seasonal anthology, this falls short by comparison to the Wildlife Trust’s Spring. There are too many letters or journal entries that only happen to be set in March to May and don’t in any way evoke the season. The selection of poems and passages is fairly predictable, and closing with an ominous extract from Rachel Carson’s Silent Spring (see below) makes for rather a downbeat conclusion. Highlights: the preface by Paul Evans, Parson Woodforde’s pigs getting drunk on the dregs of some beer (1778), Elizabeth David rhapsodizing about a wild asparagus risotto she had in Italy, and Angus Buchanan coming upon an idyllic setting in Wildlife in Canada. The gorgeous cover, the slightly ornate font that liaises s or c with t, and the three two-page green-dominated illustrations somewhat make up for the lackluster contents. 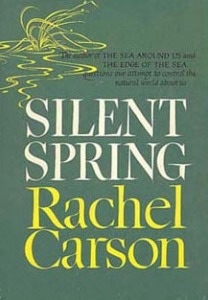 When I saw Lucy Jones speak at an event in Hungerford in support of her new book, Losing Eden, early last month, I was intrigued to hear her say that her work was consciously patterned on Silent Spring – right down to the same number of chapters. This prompted me to finally pick up the copy of Carson’s classic that I got free during a cull at the library where I used to work and have a skim through.

Both books are forthright explications of the environmental problems we face, backed up by volumes of irrefutable evidence, and suggest some potential solutions. Both open, though, with a dystopian scene: Carson’s first chapter imagines an American town where things die because nature stops working as it should. Her main target was insecticides that were known to kill birds and had presumed negative effects on human health through the food chain and environmental exposure. Although the details may feel dated, the literary style and the general cautions against submitting nature to a “chemical barrage” remain potent.

A Country Year: Living the Questions by Sue Hubbell (1986) 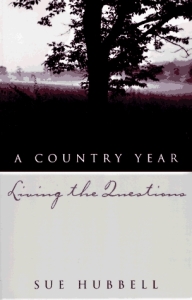 A seasonal diary that runs from one spring to the next, this is a peaceful book about living alone yet finding community with wildlife and fellow country folk. I took nine months over reading it, keeping it as a bedside book.

At her farm in southern Missouri’s Ozark Mountains, Hubbell had a small beekeeping and honey production business, “a shaky, marginal sort of affair that never quite leaves me free of money worries but which allows me to live in these hills that I love.” After her 30-year marriage ended, she found herself alone in “the afternoon of my life,” facing “the work of building a new kind of order, a structure on which a fifty-year-old woman can live”. In few-page essays she reflects on the weather, her interactions with wildlife (from bats and black rat snakes to a fawn caught in a fence), and country events like a hog roast.

I love introspective books like this one that balance solitude with nature and company and that showcase older women’s wisdom (Joan Anderson, May Sarton and Barbara J. Scot also write/wrote in this vein). Hubbell, who died at age 83 in late 2018, wrote broader scientific narratives about evolution and genetic engineering, as well as detailed books about bees and other insects. I’ll look out for more of her work.

A Sweet, Wild Note: What We Hear when the Birds Sing by Richard Smyth (2017) 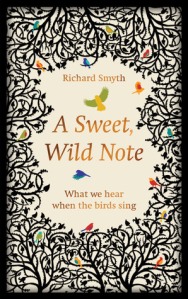 Despite being a birdwatcher since childhood, Smyth had always been ambivalent about birdsong. He certainly wasn’t one of those whizzes who can identify any bird by its call; in fact, he needed convincing that bird vocalizations are inherently beautiful. So he set off to answer a few questions: Why do birds sing? How can we recognize them by their songs? And how have these songs played into the human‒bird relationship throughout history? Ranging from bird anatomy to poetry, his historical survey is lighthearted reading that was perfect for the early days of spring. There are also chapters on captive birds, the use of birdsong in classical music, and the contribution birds make to the British soundscape. A final section, more subdued and premonitory in the vein of Silent Spring, imagines a world without birdsong and “the diminution that we all suffer. … Our lives become less rich.” (The title phrase is how Gilbert White described the blackcap’s song, Smyth’s favorite.)

when everything around you seems to be moving at a gallop, a bird’s song reminds you that some things stay the same … that you really can go home again.

in many ways the whole point of birdsong is that it’s beyond our grasp. It’s fleeting, evanescent; you might as well try to take a fistful of morning mist. But that hasn’t stopped us trying.

Have you been reading anything particularly appropriate for spring this year?

The Reading Cure: How Books Restored My Appetite by Laura Freeman 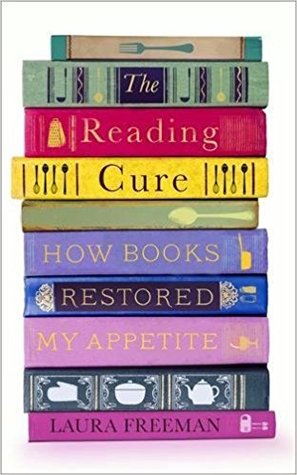 A debut memoir with food, medical and literary themes and a bibliotherapy-affirming title – this book ticks a whole lot of boxes for me. The very day I saw it mentioned on Twitter I requested a copy, and it was a warming, cozy read for the dark days of late December. As a teenager, freelance journalist Laura Freeman suffered from anorexia, and ever since she has struggled to regain a healthy relationship with food. This is decidedly not an anorexia memoir; if that’s what you’re looking for, you’ll want to pick up Nancy Tucker’s grueling but inventive The Time in Between. Instead, it’s about the lifelong joy of reading and how books have helped Freeman in the years that she has been haltingly recovering a joy of eating.

If asked to name a favorite food, Freeman writes that it would be porridge – or, if she was really pressed, perhaps her mother’s roast chicken dinner. But it’s been so long since she’s thought of food in terms of pleasure that written accounts of feasting from the likes of M.F.K. Fisher or Parson Woodforde might as well be written in a foreign language. When in 2012 she decided to read the whole of Charles Dickens’s oeuvre in his bicentenary year, she was struck afresh by the delight his characters take in meals.

While I was reading Dickens something changed. I didn’t want to be on the outside, looking at pictures, tasting recipes at one remove, seeing the last muffin go to someone else. I began to want to want food. To share it, savour it, to have it without guilt.

This nascent desire for a broader and more sumptuous food repertoire fuels the author through her voracious reading: of war writers like Siegfried Sassoon and Robert Graves with their boiled eggs and cocoa; of travel writers Laurie Lee and Patrick Leigh Fermor and their enthusiastic acceptance of whatever food came their way on treks; and of rediscovered favorite children’s books from The Secret Garden through the Harry Potter series with the characters’ greedy appetite for sweets. Other chapters are devoted to Virginia Woolf, whose depression and food issues especially resonate for Freeman; food writers; famous gluttons; and the specific challenge of chocolate, which she can’t yet bring herself to sample because it’s “so tangled up in my mind with ideas of sin, greed and loss of control.”

It’s these psychological and emotional aspects of food that Freeman is so good at capturing. She recognizes a tendency to all-or-nothing thinking that makes her prey to clean eating fads and exclusion diets. Today she still works to stifle the voices that tell her she’ll never be well and she doesn’t deserve to eat; she also tries to block out society’s contradictory messages about fat versus thin, healthy versus unhealthy, this diet versus that one. Channeling Dickens, she advises, “Don’t make a Marshalsea prison of rules for yourself – no biscuits at tea, no meat in the week, no pudding, not ever. Don’t trap yourself in lonely habits.”

Freeman’s taste in both food and literature seems a trifle old-fashioned, leaning towards jolly ol’ English stuff, but that’s because this is about comfort reading as much as it is about rediscovering comfort eating. Her memoir delicately balances optimism with reality, and encourages us to take another look at the books we love and really notice all those food scenes. Maybe our favorite writers have been teaching us how to eat well all along.

The Reading Cure: How Books Restored My Appetite is published in the UK by Weidenfeld & Nicolson. My thanks to Virginia Woolstencroft for the review copy.