Review Catch-Up: The Swimmers, Black Butterflies, Bi, and On the Scent

I have a preposterous backlog of review copies to finish and write about (I’m going to go ahead and blame buying a house, moving and DIY for my lack of focus and diminished time, as I have done most of this year), but I’ve decided to get on top of it by pulling a quartet off of my set-aside shelf each week for short responses. I always like to feature a variety, so here I have two fiction and two nonfiction selections: novels about assisted dying and the Bosnian War that are a lot funnier and more life-affirming than you might expect, and books about bisexuality and the sense of smell – and the effect of its loss.

Erin Moore has returned to her family’s rural home for Queen’s Birthday (now a dated reference, alas!), a long weekend in New Zealand’s winter. Not a time for carefree bank holiday feasting, this; Erin’s mother has advanced motor neurone disease and announces that she intends to die on Tuesday. Aunty Wynn has a plan for obtaining the necessary suicide drug; it’s up to Erin to choreograph the rest. “I was the designated party planner for this morbid final frolic, and the promise of new failures loomed. … The whole thing was looking more and more like the plot of a French farce, except it wasn’t funny.”

Lane renders a potentially maudlin situation merely bittersweet through black comedy. Erin isn’t the most endearing narrator because, Disaster Woman-like, she keeps undertaking weird acts of self-sabotage – at 26, she’s blown her first gallery curation opportunity by sleeping with her boss. Still, the picture of a different sort of dysfunctional family and the contrast between an illustrious past (Erin comes from a line of semi-pro swimmers: Aunty Wynn qualified to compete in the Commonwealth Games) and an iffy future make this fairly memorable, if not so much so as the other 2022 The Swimmers – Julie Otsuka’s.

Readalikes: Sorrow and Bliss by Meg Mason, What Are You Going Through by Sigrid Nunez, The Inland Sea by Madeleine Watts, The Weekend by Charlotte Wood

With thanks to Gallic Books for the proof copy for review.

Drawing on her own family history, Morris has crafted an absorbing story set in Sarajevo in 1992, the first year of the Bosnian War. Zora, a middle-aged painter, has sent her husband, Franjo, and elderly mother off to England to stay with her daughter, Dubravka, confident that she’ll see out the fighting in the safety of their flat and welcome them home in no time. But things rapidly get much worse than she is prepared for. Phone lines are cut off, then the water, then the electricity. “We’re all refugees now, Zora writes to Franjo. We spend our days waiting for water, for bread, for humanitarian handouts: beggars in our own city.”

When even the haven of her studio is taken away from her, she’s reduced to the bare bones of existence, with just a few beloved neighbours to keep her spirits up. Her painting, more an obsession than a hobby, keeps her human as she awaits space on a Red Cross convoy. The title has heartrending significance: ‘black butterflies’ are fragments of paper carried on the breeze after the burning of the National Library of Sarajevo, 30 years ago last month. It was especially poignant to be reading this during the war in Ukraine and think about the sorts of daily dangers and deprivation that people face in conflict zones. The pages turned quickly and I was reminded of Girl at War, one of my absolute favourites, as well as The Pianist.

With thanks to Duckworth for the proof copy for review.

Bi: The hidden culture, history, and science of bisexuality by Julia Shaw (2022)

I’m tying this in with today’s celebration of Bi Visibility Day. Shaw is a criminal psychologist; her third book is a departure for her thematically, but means a lot to her personally. Bisexuality is the largest minority sexuality group, yet bisexuals are less likely to be out because of misconceptions and stereotypes – there are fewer outward signals and less group identification – which can sometimes result in poor mental health. Shaw realized how tricky bi identity was when a German TV show wanted to base a character on her but didn’t know how to make her sexuality obvious to viewers (lingering glances/flirtations involving both men and women? a backstory about a previous relationship with a woman?), and when trying to figure out what to wear to gay bars. 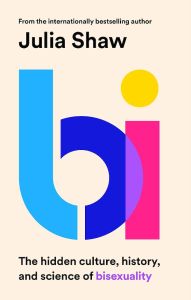 The book aims to situate bisexuality historically and scientifically. The term “bisexual” has been around since the 1890s, with the Kinsey Scale and the Klein Grid early attempts to add nuance to a binary view. Shaw delights in the fact that the mother of the Pride movement in the 1970s, Brenda Howard, was bisexual. She also learns that “being behaviourally bisexual is commonplace in the animal kingdom,” with many species engaging in “sociosexual” behaviour (i.e., for fun rather than out of reproductive instinct). It’s thought that 83% of bisexuals are closeted, mostly due to restrictive laws or norms in certain parts of the world – those seeking asylum may be forced to “prove” bisexuality, which, as we’ve already seen, is a tough ask. And bisexuals can face “double discrimination” from the queer community.

It felt odd to me that a final chapter on bisexual relationships ended up being mostly about threesomes, such that my main question (as she puts it: “what are the problems with the assumed link between bisexuality and non-monogamy?”) only merited four pages. A valuable book, certainly, but one to read for information rather than entertainment or thoughtful prose.

On the Scent: Unlocking the mysteries of smell – and how its loss can change your world by Paola Totaro and Robert Wainwright (2022)

Totaro (co-author Wainwright is her husband) contracted COVID-19 in March 2020 and temporarily lost the ability to smell, prompting her to embark on this investigation into a 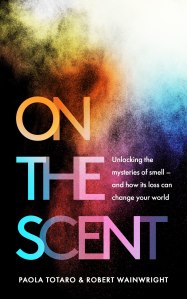 less-understood sense. One in 10,000 people have congenital anosmia, but many more than that experience it at some point in life (e.g., due to head trauma, or as an early sign of Parkinson’s disease), and awareness has shot up since it’s been acknowledged as a symptom of Covid. For some, it’s parosmia instead – smell distortions – which can almost be worse, with people reporting a constant odour of smoke or garbage, or that some of their favourite aromas, like coffee, were now smelling like faeces instead. Such was the case for Totaro.

She visits fascinating places like the Smell and Taste clinic in Dresden and the University of Reading Flavour Centre. “Sniffin’ sticks” are used to put people’s sense of smell to the test, but it’s notoriously difficult, even for those who haven’t had their senses compromised by illness, to name a smell out of context; people generally don’t score over 50%. That’s one of the major questions the book asks: why it is quite so difficult to identify smells, or describe them in words. Totaro also considers perfume-making, the associations of particular smells (bleach, pine or lemon, depending on your country) with cleanliness, and the potential for multisensory experiences, such as releasing odours during film showings. Lots of interesting topics and stories here, but not as compelling on the whole as The Smell of Fresh Rain.

With thanks to Elliott & Thompson for the proof copy for review.

Best of the 4: Black Butterflies