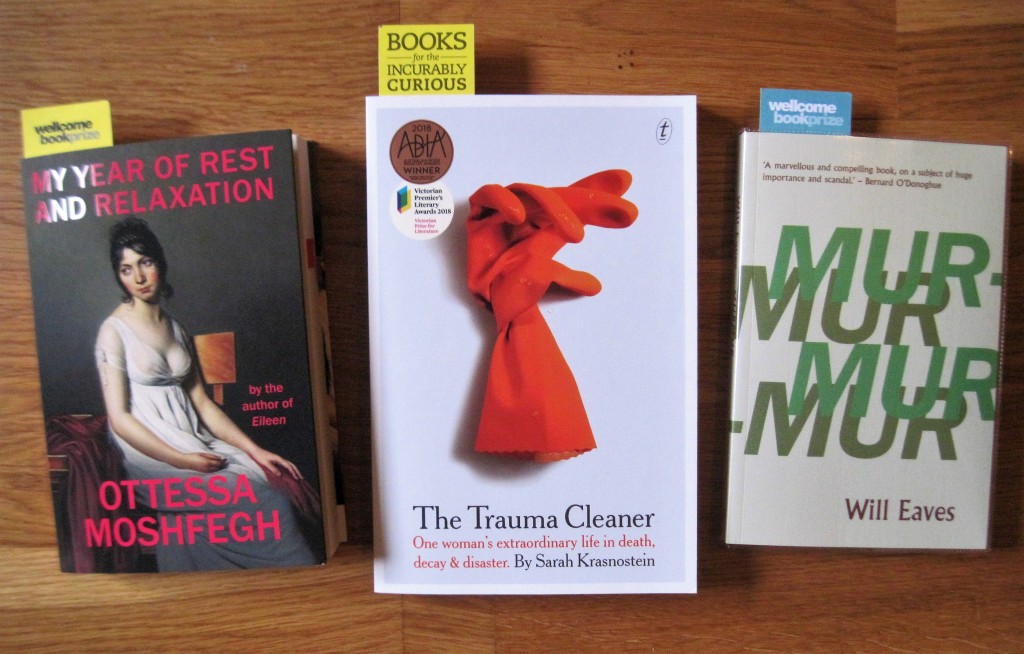 The Trauma Cleaner: One Woman’s Extraordinary Life in Death, Decay and Disaster by Sarah Krasnostein (2017)

I guarantee you’ve never read a biography quite like this one. For one thing, its subject is still alive and has never been much of a public figure, at least not outside Victoria, Australia. For another, your average biography is robustly supported by archival evidence; to the contrary, this is a largely oral history conveyed by an unreliable narrator. And lastly, whether a biography is critical or adulatory overall, the author usually at least feigns objectivity. Sarah Krasnostein doesn’t bother with that. Sandra Pankhurst’s life is an incredible blend of ordinary and bizarre circumstances and experiences, and it’s clear Krasnostein is smitten with her. “I fall in love … anew each time I listen to her speak,” she gushes towards the book’s end. At first I was irked by all the fawning adjectives she uses for Sandra, but eventually I stopped noticing them and allowed myself to sink into this astonishing story.

Sandra was born male and adopted by a couple whose child had died. When they later conceived again, they basically disowned ‘Peter’, moving him to an outdoor shed and making him scrounge for food. His adoptive father was an abusive alcoholic and kicked him out permanently when he was 17. Peter married ‘Linda’ at age 19 and they had two sons in quick succession, but he was already going to gay bars and wearing makeup; when he heard about the possibility of a sex change, he started taking hormones right away. Even before surgery completed the gender reassignment, Sandra got involved in sex work, and was a prostitute for years until a brutal rape at the Dream Palace brothel drove her to seek other employment. Cleaning and funeral home jobs nicely predicted the specialty business she would start after the hardware store she ran with her late husband George went under: trauma cleaning.

Krasnostein parcels this chronology into tantalizing pieces, interspersed with chapters in which she accompanies Sandra and her team on assignments. They fumigate and clean up bodily fluids after suicides and overdoses, but also deal with clients who have lost control of their possessions – and, to some extent, their lives. They’re hoarders, cancer patients and ex-convicts; their homes are overtaken by stuff and often saturated with mold or feces. Sandra sympathizes with the mental health struggles that lead people into such extreme situations. Her line of work takes “Great compassion, great dignity and a good sense of humour,” she tells Krasnostein; even better if you can “not … take the smell in, ’cause they stink.”

The author does a nice job of staying out of the narrative: though she’s an observer and questioner, there’s only the occasional paragraph in which she mentions her own life. Her mother left when she was young, which helps to explain why she is so compassionate towards the addicts and hoarders she meets with Sandra. Some of the loveliest passages have her pondering how things got so bad for these people and affirming that their lives still have value. As for Sandra herself – now in her sixties and increasingly ill with lung disease and cirrhosis – Krasnostein believes she’s never been unconditionally loved and so has never formed true human connections.

This book does many different things in its 250 pages. It’s part journalistic exposé and part “love letter”; it’s part true crime and part ordinary life story. It considers gender, mental health, addiction, trauma and death. It’s also simply a terrific read that should draw in lots of people who wouldn’t normally pick up nonfiction. I don’t expect it to advance to the shortlist, but if it does I’ll be not-so-secretly delighted.

Sometimes, listening to Sandra try to remember the events of her life is like watching someone reel in rubbish on a fishing line: a weird mix of surprise, perplexity and unexpected recognition. No matter how many times we go over the first three decades of her life, the timeline of places and dates is never clear. Many of her memories have a quality beyond being merely faded; they are so rusted that they have crumbled back into the soil of her origins. Others have been fossilised, frozen in time, and don’t have a personal pull until they defrost slightly in the sunlit air between us as we speak. And when that happens there is a tremor in her voice as she integrates them back into herself, not seamlessly but fully.

My Year of Rest and Relaxation by Ottessa Moshfegh (2018)

If you’ve read her Booker-shortlisted debut, Eileen, you’ll be unsurprised to hear that Moshfegh has written another love-it-or-hate-it book with a narrator whose odd behavior is hard to stomach. This worked better for me than Eileen, I think because I approached it as a deadpan black comedy in the same vein as Elif Batuman’s The Idiot. Its inclusion on the Wellcome longlist is somewhat tenuous: in 2000 the unnamed narrator, in her mid-twenties, gets a negligent psychiatrist to prescribe her drugs for insomnia and depression and stockpiles them so she can take pill cocktails to knock herself out for days at a time. In a sense this is a way of extending the numbness that started with her parents’ deaths – her father from cancer and her mother by suicide. But there’s also a more fantastical scheme in her mind: “when I’d slept enough, I’d be okay, I’d be renewed, reborn. I would be a whole new person.”

Ever since she was let go from her job at a gallery that showcases ridiculous modern art, the only people in this character’s life are an on-again, off-again boyfriend, Trevor, and her best (only) friend from college, longsuffering Reva, who keeps checking up on her in her New York City apartment even though she consistently treats Reva with indifference or disdain. Soon her life is a bleary cycle of sleepwalking and sleep-shopping, interspersed with brief periods of wakefulness, during which she watches a nostalgia-inducing stream of late-1990s movies on video (the kind of stuff I watched at sleepovers with my best friend during high school) – she has a weird obsession with Whoopi Goldberg.

It’s a wonder the plot doesn’t become more repetitive. I like reading about routines, so I was fascinated to see how the narrator methodically takes her project to extremes. Amazingly, towards the middle of the novel she gets herself from a blackout situation to Reva’s mother’s funeral – about the only time we see somewhere that isn’t her apartment, the corner shop, the pharmacy or Dr. Tuttle’s office – and this interlude is just enough to break things up. There are lots of outrageous lines and preposterous decisions that made me laugh. Consumerism and self-medication to deaden painful emotions are the targets of this biting satire. As 9/11 approaches, you wonder what it will take to wake this character up to her life. I’ve often wished I could hibernate through British winters, but I wouldn’t do what Moshfegh’s antiheroine does. Call this a timely cautionary tale about privilege and disengagement.

“Initially, I just wanted some downers to drown out my thoughts and judgments, since the constant barrage made it hard not to hate everyone and everything. I thought life would be more tolerable if my brain were slower to condemn the world around me.”

“Oh, sleep, nothing else could ever bring me such pleasure, such freedom, the power to feel and move and think and imagine, safe from the miseries of my waking consciousness.”

Reva: “you’re not changing anything in your sleep. You’re just avoiding your problems. … Your problem is that you’re passive. You wait around for things to change, and they never will. That must be a painful way to live. Very disempowering.”

And one more that I got out from the library and skimmed:

The subject is Alec Pryor, or “the scientist.” It’s clear that he is a stand-in for Alan Turing, quotes from whom appear as epigraphs at the head of most chapters. Turing was arrested for homosexuality and subjected to chemical castration. I happily read the first-person “Part One: Journal,” which was originally a stand-alone story (shortlisted for the BBC National Short Story Award 2017), but “Part Two: Letters and Dreams” was a lot harder to get into, so I ended up just giving the rest of the book a quick skim. If this is shortlisted, I promise to return to it and give it fair consideration.

We will announce our shadow panel shortlist on Friday. Follow along here and on Halfman, Halfbook, Annabookbel, A Little Blog of Books, and Dr. Laura Tisdall for reviews, predictions and reactions.