I’ve never had a Christmas Day without my immediate family or in-laws before, but when West Berkshire leapt into the Tier 4 (highest) COVID-19 risk category on Saturday it was clear that even our modest plans to spend 48 hours at my parents-in-law’s home by the coast would be dashed. How we’d looked forward to seeing other people and going somewhere else! Nothing dramatic; just a change of scene and an excuse to pack an overnight bag and a giant tote full of books. The bright side, if there is one, is that we can choose exactly how to spend the holidays, and my husband – a fantastic cook – will have total control over the feast.

To keep our spirits up, we’ve done more Christmas decorating than usual. Our lounge is dominated by the biggest tree we’ve had yet, there’s holly all over, and we strung colored fairy lights across one wall. After Saturday’s bad news, we brought forward our annual viewing of Elf. And of course, I have a stack of seasonally appropriate books at the ready.

Here’s the first two I managed to read for review:

Many of these 30 short stories originally appeared in publications like the Scotsman, Tablet and Glasgow Herald between the 1940s and 1990s, with some also reprinted in previous Mackay Brown story volumes. This posthumous collection of seasonal tales by Orkney’s best-known writer runs the gamut from historical fiction to timeless fable, and travels from the Holy Land to Scotland’s islands. Often, Orkney is contrasted with Edinburgh, as in one of my favorites, “A Christmas Exile,” in which a boy is sent off to Granny’s house in Orkney one winter while his mother is in hospital and longs to make it home in time for Christmas.

Although the main characters are usually crofters, fishermen and lairds, they take on other roles in Nativity and Christmas Carol-like setups. For instance, a skipper, a miller, and a shepherd play the part of the Three Kings, while a greedy general merchant who won’t close his shop for Christmas Day is like Ebenezer Scrooge. Biblical and Dickensian figures merge in “An Epiphany Tale,” in which a deaf-blind-mute boy is visited by three strangers who give him back each of his senses, in turn, for one magical day. Characters get visions of the past or glimpses of how the other half live (“The Poor Man in His Castle”). Children are disabused of the idea of Santa Claus, but the unexplained still fuels a sense of wonder, as in Jeanette Winterson’s holiday stories. Even the poor have small gifts and pleasures to look forward to.

As editor William S. Peterson notes in his introduction, Calvinism had erased much of the joy from Christmas in Scotland, but in Mackay Brown’s lifetime he saw Yule traditions returning and was keen to emphasize that Christmas was not just about one day of celebration but was a whole season running from Advent through to Epiphany. The story “I Saw Three Ships…” remembers an oppressed past, though: set at the end of the Civil War, after King Charles I was beheaded, it is set at a time when the government declared “‘There will be no more Christmas. Christmas is abolished and forbid in the islands here, as it has been put down everywhere in this commonwealth. We will have no more of such ancient mummery.’ … Men reckoned that that was the longest coldest dreichest winter ever known in Orkney.” Those words might feel gloomily appropriate, but let’s celebrate all the more in defiance.

With thanks to Galileo Publishers for the free copy for review.

Words for snow exist in most of the world’s languages – even those spoken in countries where it rarely, if ever, snows. For instance, Thai has “hima” at the ready even though there were only once claims of a snow flurry in Thailand, in 1955. Campbell meanders through history, legend, and science in these one- to five-page essays. I was most taken by the pieces on German “kunstschnee” (the fake snow used on movie sets), Icelandic “hundslappadrifa” (snowflakes big as a dog’s paw, a phrase used as a track title on one of Jónsi’s albums – an excuse for discussing the amazing Sigur Rós), and Estonian “jäätee” (the terrifying ice road that runs between the mainland and the island of Hiiumaa – only when the ice is 22 cm thick, and with cars traveling 2 minutes apart and maintaining a speed of 25–40 km/hour).

The white and blue tendrils of the naked hardback’s cover creep over onto the endpapers, each essay is headed by a Wilson Bentley photograph of a snowflake, and the type is in a subtle dark blue ink rather than black. Too many of the essays are thin or dull, such that the contents don’t live up to the gorgeous physical object they fill. Still, I imagine you have a snow-loving relative who would appreciate a copy as a seasonal coffee table book.

With thanks to Elliott & Thompson for the free copy for review. 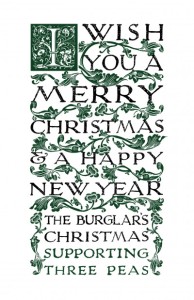 This Renard Press pamphlet supporting the Three Peas charity (in aid of Europe’s refugees) was sent to me as a Christmas card alternative by Annabel/Shiny New Books. A young man wanders the slushy streets of Chicago one Christmas Eve. On this, his 24th birthday, he laments how low he has sunk that he has to rob the rich in order to get money to eat. But in this take on the Prodigal Son story, there is a second chance at forgiveness and a good life. I was reminded of the high society atmosphere of Edith Wharton’s work and the moral fables of O. Henry. The lovely little story has a William Morris design on the cover. I’ll keep it with my small collection of Christmas books and bring it out to reread in future years.

Are you reading any Christmas or wintry books?

What are your plans for the holidays?