Farewell to Winter with Some Snowy and Icy Reads

Although we got plenty of cold, damp weather and gray skies, it feels like we were cheated out of winter in my part of England this year. We had just one snow flurry on the 27th of February; that will have to suffice as my only taste of proper winter for the year. Not to worry, though: I’ve been getting my fix of snow and ice through my reading, starting with two animal tales and moving on to a few travel and adventure books.

Philip Rhayader is a lonely bird artist on the Essex marshes by an abandoned lighthouse. “His body was warped, but his heart was filled with love for wild and hunted things. He was ugly to look upon, but he created great beauty.” One day a little girl, Fritha, brings him an injured snow goose and he puts a splint on its wing. The recovered bird becomes a friend to them both, coming back each year to spend time at Philip’s makeshift bird sanctuary. As Fritha grows into a young woman, she and Philip fall in love (slightly creepy), only for him to leave to help with the evacuation of Dunkirk. This is a melancholy and in some ways predictable little story. It was originally published in the Saturday Evening Post in 1940 and became a book the following year. I read a lovely version illustrated by Angela Barrett. It’s the second of Gallico’s animal fables I’ve read; I slightly preferred The Small Miracle. 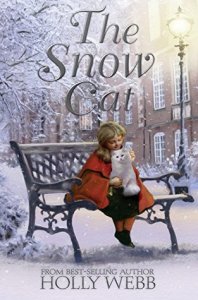 Most twee cover ever?

My second from Holly Webb, and while I enjoyed it a lot, if not quite as much as Frost, I probably don’t need to read any more by her now because these two were so similar as to reveal a clear formula: a young girl of about nine years old who plays alone (because she’s an only child or left out of her siblings’ games) goes for an outdoor adventure and meets a cute animal who leads her back into the past. For a time it’s unclear whether she’s dreaming or really experiencing the history, but at the end there’s some physical token that proves she has been time travelling.

In this case, Bel goes to play in the snowy garden of her grandmother’s retirement complex and meets a white cat named Snow who belongs to Charlotte, the daughter of the family who owned this manor house 150 years ago. Bel has to protect Snow from a threatening dog so the cat can be brought in to visit Charlotte’s sister Lucy, who lies ill with influenza. For me the Victorian setting wasn’t quite as authentic or interesting as the seventeenth-century frost fair was in Frost, but I can see how it’s a good way of introducing kids to what was different in the past: everything from clothing and speech to the severity of illness.

The Snow Tourist by Charlie English (2008)

“A Search for the World’s Purest, Deepest Snowfall” reads the subtitle on the cover. English set out from his home in London for two years of off-and-on travel in snowy places, everywhere from Greenland to Washington State. In Jericho, Vermont, he learns about Wilson Bentley, an amateur scientist who was the first to document snowflake shapes through microscope photographs. In upstate New York, he’s nearly stranded during the Blizzard of 2006. He goes skiing in France and learns about the deadliest avalanches – Britain’s worst was in Lewes in 1836. In Scotland’s Cairngorms, he learns how those who work in the ski industry are preparing for the 60–80% reduction of snow predicted for this century. An appendix dubbed “A Snow Handbook” gives some technical information on how snow forms, what the different crystal shapes are called, and how to build an igloo, along with whimsical lists of 10 snow stories (I’ve read six), 10 snowy films, etc.

I found all of the science and history interesting, but especially liked a chapter on depictions of snow in art, such as Pieter Bruegel the Elder’s The Hunters in the Snow. The author also subtly threads in his own story, noting that this quest probably began with the 1960s photograph of himself on skis at a snowy Austrian resort that his father gave him a few weeks before he committed suicide. Twelve years later, it feels like this book doesn’t go far enough in cautioning about all that will be lost with climate change. I was left with the sense that nature is majestic and unpredictable, and we pay the price for not respecting it.

Hunters in the Snow. Pieter Bruegel the Elder / Public domain.

[Breaking from alphabetical order to include this one as a footnote to the previous book.]

This has a very similar format and scope to The Snow Tourist, with Campbell ranging from Greenland and continental Europe to the USA in her search for the science and stories of ice. For English’s chapter on skiing, substitute a section on ice skating. I only skimmed this one because – in what I’m going to put down to a case of reader–writer mismatch – I started it three times between November 2018 and now and could never get further than page 60. See these reviews from Laura and Liz for more enthusiasm.

My thanks to Scribner UK for the free copy for review.

Winterdance: The Fine Madness of Running the Iditarod by Gary Paulsen (1994)

Paulsen’s name was familiar to me from his children’s books – a tomboy, I spent my childhood fascinated by Native American culture, survival skills and animals, and Hatchet was one of my favorite novels. I had no idea he had written books for adults, including this travelogue of competing in the Iditarod sled dog race across the frozen Alaska wilderness. Nearly half the book is devoted to his preparations, before he ever gets to Alaska. He lived in Minnesota and took time assembling what he thought of as a perfect team of dogs, from reliable Cookie, his lead dog, to Devil, whose name says it all. He even starts sleeping in the kennel with the dogs to be fully in tune with them.

The travails of his long trial runs with the dogs – the sled flipping over, having to walk miles after losing control of the dogs, being sprayed in the face by multiple skunks – sound bad enough, but once the Iditarod begins the misery ramps up. The course is nearly 1200 miles, over 17 days. It’s impossible to stay warm or get enough food, and a lack of sleep leads to hallucinations. At one point he nearly goes through thin ice. At another he’s run down by a moose. He also watches in horror as a fellow contestant kicks a dog to death.

Paulsen concludes that you would have to be insane to run the Iditarod, and there’s an appropriately feverish intensity running through the book. The way he describes the bleak beauty of the landscape, you can see how attractive and forbidding it was all at the same time. This is just the kind of adventurous armchair traveling I love (see also This Cold Heaven) – someone else did this, so now I don’t have to!

(Note: The author completed two races and was training for his third when a diagnosis of coronary heart disease ended his Iditarod career in his mid-forties. More than the obsession, more than the competition, he knows that he’ll miss the constant company of dogs. In fact, his last line is “How can it be to live without the dogs?”)

And a snowy passage from Winter Journal by Paul Auster:

Snow, so much snow these past days and weeks that fifty-six inches have fallen on New York in less than a month. Eight storms, nine storms, you have lost track by now, and all through January the song heard most often in Brooklyn has been the street music made by shovels scraping against sidewalks and thick patches of ice. Intemperate cold (three degrees one morning), drizzles and mizzles, mist and slush, ever-aggressive winds, but most of all the snow, which will not melt, and as one storm falls on top of another, the bushes and trees in your back garden are all wearing ever-longer and heavier beards of snow. Yes, it seems to have turned into one of those winters, but in spite of the cold and discomfort and your useless longing for spring, you can’t help admiring the vigor of these meteorological dramas, and you continue to look at the falling snow with the same awe you felt when you were a boy.

Did you read any particularly wintry books this season?