The #1954Club: Pictures from an Institution by Randall Jarrell

A quick follow-up to Friday’s post with one more read from 1954, plus a skim. The one is a series of comic portraits set on a women’s college campus, and the other is the story of a preacher’s son in 1930s Harlem. (Both: University library; 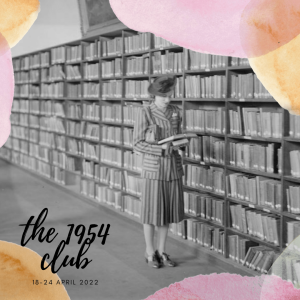 Pictures from an Institution by Randall Jarrell

I have a real soft spot for novels set on college campuses. Any time I’ve looked through lists of options, Jarrell’s has been there. Still, it took the 1954 Club for me to finally pick up a copy. For about the first half, I was fully engaged with this academic comedy even though it doesn’t have a plot as such. The stage is Benton women’s college; the cast includes various eccentric professors and other staff, from President Robbins on down. Gertrude Johnson, a visiting writer, is writing a novel about Benton. The problem for her – and for us as readers – is two-fold: the characters are almost too eccentric to be believed, and nothing happens here.

The narrator, a poetry professor at Benton, knew Gertrude socially back in New York City. His descriptions of his fellow faculty are often hilarious. For instance, here’s his picture of Flo Whittaker:

Mostly she wore, in the daytime in the winter, a tweed skirt, a sweater-set, and a necklace. The skirt looked as if a horse had left her its second-best blanket; the sweaters looked as if an old buffalo, sitting by a fire of peat, had knitted them for her from its coat of the winter before

The Whittakers’ house is so full of kitschy knick-knacks that “Jeremy Bentham’s stuffed body would not have been ill at ease.” And then there’s the Robbinses’ ill-behaved pair of Afghan hounds, and Dr. Rosenbaum the music professor, whose German accent is rendered over-the-top.

Funny as parts of the novel can be, the humour can feel dated and sometimes relies on niche cultural references. The very first line, for example: “Half the campus was designed by Bottom the Weaver, half by Ludwig Mies van der Rohe”. However, elsewhere Jarrell mocks the pretentiousness of modern art and of the Benton set, who also seem woke avant la lettre:

Most of the people of Benton would have swallowed a porcupine, if you had dyed its quills and called it Modern Art; they longed for men to be discovered on the moon, so that they could show that they weren’t prejudiced towards moon men; and they were so liberal and selfless, politically

Amusing pen portraits and witty lines made this pleasant to spend time with, but not a read that will stick with me.

As usual for any reading challenge, I bit off more than I could chew and started a fourth book but couldn’t get through it in time and, in all honesty, wasn’t finding it compelling. I’ll have to give it a better try on another occasion.

Go Tell It on the Mountain by James Baldwin

I’ve enjoyed Baldwin’s work before (The Fire Next Time, Giovanni’s Room), but didn’t make it much past page 30 of this novel about John Grimes, a preacher’s son in Harlem, before starting to skim. The central section contains long flashbacks to the backstory of three secondary characters, whereas I was more interested in John’s story (semi-autobiographical for Baldwin, apparently). Mostly I thought of how the content and narrative style must have influenced the following generations of African American writers, including Toni Morrison and Catherine Adel West – both of whom I was reading at the same time.

Gael Foess, the antiheroine of Caoilinn Hughes’ debut novel, is a trickster. When we first meet her in Dublin in 2002, the 11-year-old is promptly kicked out of school for trying to sell other girls “virginity pills.” As the years pass we see her con her way into a London Business School interview, self-assuredly teach a literature class when her professor doesn’t show up, pretend to be a journalist to get an exclusive interview, and use deception to try to boost the careers of both her mother, Sive (a conductor), and her younger brother, Guthrie (a painter and single dad). In the title metaphor, which refers to an orchid species that lures pollinating wasps, Gael is the seductive flower that gets what it wants. We’re also invited to think of her, with that typically Gael-ic name, as an incarnation of mythological Irish hero Cúchulainn. 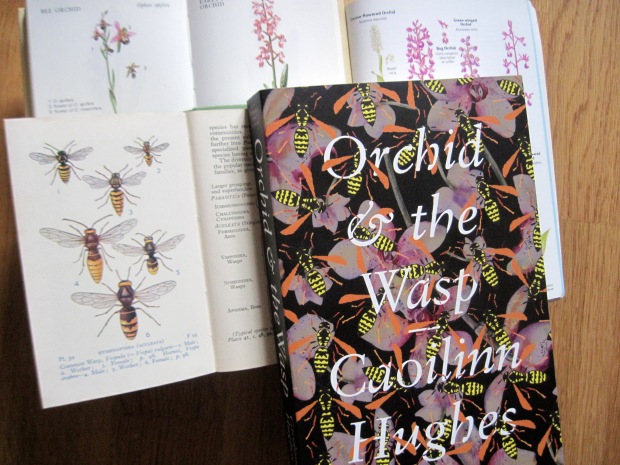 The novel spans about nine years: a politically turbulent decade that opens with Iraq War protests and closes with the Occupy movement in New York City. The financial crisis temporarily jolts Gael and Guthrie’s father, Jarleth, a high-flying Barclays banker who leaves the family in 2008. The biblical parable of the talents, which he recounted to Gael when she was a little girl, comes back to resonate: It’s a potent reminder that money and skills don’t get distributed fairly in this life. When Gael gets to New York in 2011, she plans to redress the balance in two paradoxical ways: living in the Occupy camp and taking part in protests; and secretly earning her brother a fortune on his modern art. For even while decrying her father’s privilege, she indulges her own love of fine things; even if ironically, she says that she aspires to be in the 1%, too.

With all her contradictions, Gael is an unforgettable character. I also found Guthrie fascinating. It was serendipitous that I read this novel alongside Suzanne O’Sullivan’s new book, Brainstorm. Guthrie was a mystically religious child and suffered from seizures, which doctors determined weren’t due to epilepsy but to somatic delusions – psychological rather than physiological. The seizures, ironically, became a boon because they inspire his art: “they’re hallowed and each aura is an absolution – a benison – and not just a synaptic blip.”

Hughes is wonderfully adept at voices, bringing secondary characters to life largely through how they speak. I especially warmed to Art, Sive’s boyfriend, who’s a Yorkshireman; and Harper, Gael’s OCD-plagued flatmate from Las Vegas. Even a brief run-in with American officialdom gets the perfect deadpan rendering: “United States Customs has no interest in surprises. Matter of fact, we hate surprises.” The novel often has a frenetic pace – an energy that’s well matched by the virtuosic use of language, with wordplay, neologisms, and metaphors drawn from art, music and nature. An orchestra is compared to a flock of starlings; a despondent Sive “began to resemble a bass clef.” The Irish are like radishes: “Pink on the outside, white underneath. Speck of mud on their cheeks.” Harper’s entire upbringing is pithily reduced to an “only-childhood of sprinkler weather, window glare and doughnut glazing.” I also loved this tiny poem of a phrase: “sobbing hampers syntax.”

My only real misgiving about the novel is the ending: After Gael comes back from New York, things sort of fizzle out. I even wondered if the story line could have stopped a chapter earlier. But in a way it makes sense to get no tidy closure for our protagonist. Gael is still only 20 years old at the book’s end, so it’s no surprise that she remains a restless wanderer. I certainly wouldn’t object to hearing about her further adventures in a sequel. Hughes is an exciting writer who has rightfully attracted a lot of buzz for her debut, and this is sure to be one of my novels of the year. It’s a perfect follow-on read from Tom Rachman’s The Italian Teacher, and I’d also recommend it highly to fans of Sweetbitter, The Art of Fielding, The Nix, and The Life and Death of Sophie Stark. Watch out for it in two weeks’ time.

Orchid & the Wasp will be published by Oneworld in the UK on June 7th. It’s not out in the USA until July 10th (Hogarth). My thanks to Margot Weale for a proof copy for review.