Final Thoughts on the Booker Longlist

On Wednesday the 13th the Man Booker Prize shortlist will be announced. I’d already reviewed six of the nominees and abandoned one; in the time since the longlist announcement I’ve only managed to read another one and a bit. That leaves four I didn’t get a chance to experience. Here’s a run-through of the 13 nominees, with my brief thoughts on each. 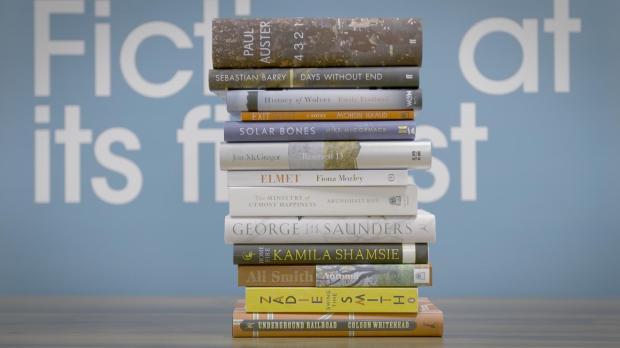 4 3 2 1 by Paul Auster (US) (Faber & Faber): I can’t see myself reading this one any time soon; I’ll choose a shorter work to be my first taste of Auster’s writing. I’ve heard mostly good reports, though.

Days Without End by Sebastian Barry (Ireland) (Faber & Faber): Read in March 2017. This is my overall favorite from the longlist so far. (See my BookBrowse review.) However, it’s already been recognized with the Costa Prize and the Walter Scott Prize for historical fiction, so if it doesn’t make the Booker shortlist I certainly won’t be crushed.

History of Wolves by Emily Fridlund (US) (Weidenfeld & Nicolson): Read in March 2017. A slow-building coming-of-age story with a child’s untimely death at its climax. Fridlund’s melancholy picture of outsiders whose skewed thinking leads them to transgress moral boundaries recalls Lauren Groff and Marilynne Robinson. (Reviewed for the Times Literary Supplement;

Exit West by Mohsin Hamid (Pakistan-UK) (Hamish Hamilton): I don’t have much interest in reading this one at this point; I didn’t get far in the one book I tried by Hamid (The Reluctant Fundamentalist) earlier this year. I’ve encountered mixed reviews.

Solar Bones by Mike McCormack (Ireland) (Canongate): If you’ve heard anything about this, it’s probably that the entire book is composed of one sentence. Now here’s an embarrassing admission: I didn’t make it past the first page.

Reservoir 13 by Jon McGregor (UK) (4th Estate): I read the first 15% last month and set it aside. I knew what to expect – lovely descriptions of the natural world and the daily life of a small community – but I guess hadn’t fully heeded the warning that nothing much happens. I won’t rule out trying this one again in the future, but for now it couldn’t hold my interest.

Elmet by Fiona Mozley (UK) (JM Originals): Read in August 2017. Simply terrific. (See my full blog review.) Overall, this dark horse selection is in second place for me. I’d love to see it make it through to the shortlist.

The Ministry of Utmost Happiness by Arundhati Roy (India) (Hamish Hamilton): I was never a huge fan of The God of Small Things, so this is another I’m not too keen to try.

Lincoln in the Bardo by George Saunders (US) (Bloomsbury Publishing): Read in April 2017. An entertaining and original treatment of life’s transience. I enjoyed the different registers Saunders uses for his characters, but was less convinced about snippets from historical texts. So audacious it deserves a shortlist spot; I wouldn’t mind it winning.

Home Fire by Kamila Shamsie (UK-Pakistan) (Bloomsbury Circus): This is the one book from the longlist that I most wish I’d gotten a chance to read. It’s been widely reviewed in the press as well as in the blogging world (A life in books, Elle Thinks, and Heavenali), generally very enthusiastically.

Autumn by Ali Smith (UK) (Hamish Hamilton): Read in November 2016. (See my blog review.) While some of Smith’s strengths benefit from immediacy – a nearly stream-of-consciousness style (no speech marks) and jokey dialogue – I’d prefer a more crafted narrative. In places this was repetitive, with the seasonal theme neither here nor there.

Swing Time by Zadie Smith (UK) (Hamish Hamilton): Read in October 2016 for a BookBrowse review. The Africa material wasn’t very convincing, and the Aimee subplot and the way Tracey turns out struck me as equally clichéd. The claustrophobic narration makes this feel insular. A disappointment compared to White Teeth and On Beauty.

The Underground Railroad by Colson Whitehead (US) (Fleet): Read in July 2017. (See my blog review.) I’m surprised such a case has been made for the uniqueness of this novel based on a simple tweak of the historical record. I felt little attachment to Cora and had to force myself to keep plodding through her story. Every critic on earth seems to love it, though.

If I had to take a guess at which six books will make it through Wednesday and why, I’d say:

By contrast, if I were asked for the six I would prefer to be on the shortlist, and why, it’d be:

That would be three men and three women, if not the best mix of countries. I’d be happy with that list.