It’s been a frigid start to March here in Europe. Even though it only amounted to a few inches in total, this is still the most snow we’ve seen in years. We were without heating for 46 hours during the coldest couple of days due to an inaccessible frozen pipe, so I’m grateful that things have now thawed and spring is looking more likely. During winter’s last gasp, though, I’ve been dipping into a few appropriately snow-themed books. I had more success with some than with others. I’ll start with the one that stood out.

A fieldfare. Photos by Chris Foster.

Drifts by a local stream. 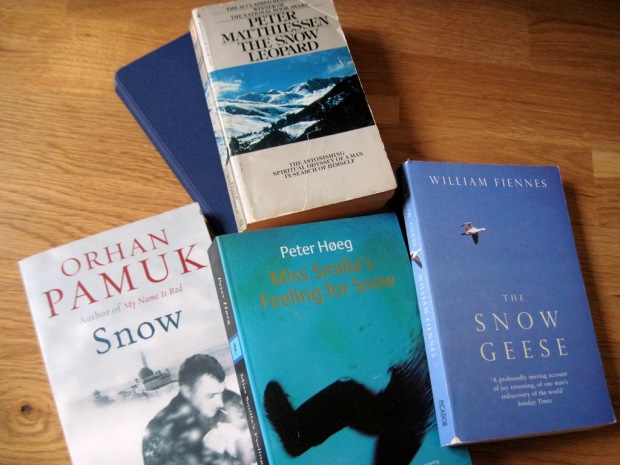 [trans. from the Danish by Felicity David]

Nordic noir avant la lettre? I bought this rather by accident; had I realized it was a murder mystery, I never would have taken a chance on this international bestseller. That would have been too bad, as it’s much more interesting than your average crime thriller. The narrator/detective is Smilla Jaspersen: a 37-year-old mathematician and former Arctic navigator with a Danish father and Greenlander mother, she’s a stylish dresser and a shrewd, bold questioner who makes herself unpopular by nosing about where she doesn’t belong.

Isaiah, a little Greenlander boy, has fallen to his death from the roof of the Copenhagen apartment complex where Smilla also lives, and she’s convinced foul play was involved. In Part I she enlists the help of a mechanic neighbor (and love interest), a translator, an Arctic medicine specialist, and a mining corporation secretary to investigate Isaiah’s father’s death on a 1991 Arctic expedition and how it might be connected to Isaiah’s murder. In Part II she tests her theories by setting sail on the Greenland-bound Kronos as a stewardess. At every turn her snooping puts her in danger – there are some pretty violent scenes.

I read this fairly slowly, over the course of a month (alongside lots of other books); it’s absorbing but in a literary style, so not as pacey or full of cliffhangers as you’d expect from a suspense novel. I got myself confused over all the minor characters and the revelations about the expeditions, so made pencil notes inside the front cover to keep things straight. Setting aside the plot, which gets a bit silly towards the end, I valued this most for Smilla’s self-knowledge and insights into what it’s like to be a Greenlander in Denmark. I read this straight after Gretel Ehrlich’s travel book about Greenland, This Cold Heaven – an excellent pairing I’d recommend to anyone who wants to spend time vicariously traveling in the far north.

“I’m not perfect. I think more highly of snow and ice than of love. It’s easier for me to be interested in mathematics than to have affection for my fellow human beings.”

One that I left unfinished:

[trans. from the Turkish by Maureen Freely]

This novel seems to be based around an elaborate play on words: it’s set in Kars, a Turkish town where the protagonist, a poet known by the initials Ka, becomes stranded by the snow (Kar in Turkish). After 12 years in political exile in Germany, Ka is back in Turkey for his mother’s funeral. While he’s here, he decides to investigate a recent spate of female suicides, keep tabs on the upcoming election, and see if he can win the love of divorcée Ipek, daughter of the owner of the Snow Palace Hotel, where he’s staying. There’s a hint of magic realism to the novel: the newspaper covers Ka’s reading of a poem called “Snow” before he’s even written it. He and Ipek witness the shooting of the director of the Institute of Education. The attempted assassination is revenge for him banning girls who wear headscarves from schools.

As in Elif Shafak’s Three Daughters of Eve, the emphasis is on Turkey’s split personality: a choice between fundamentalism (= East, poverty) and secularism (= West, wealth). Pamuk is pretty heavy-handed with these rival ideologies and with the symbolism of the snow. By the time I reached page 165, having skimmed maybe two chapters’ worth along the way, I couldn’t bear to keep going. However, if I get a recommendation of a shorter and subtler Pamuk novel I would give him another try. I did enjoy the various nice quotes about snow (reminiscent of Joyce’s “The Dead”) – it really was atmospheric for this time of year.

“That’s why snow drew people together. It was as if snow cast a veil over hatreds, greed and wrath and made everyone feel close to one another.”

One that I only skimmed:

The Snow Geese by William Fiennes (2002)

Having recovered from an illness that hit at age 25 while he was studying for a doctorate, Fiennes set off to track the migration route of the snow goose, which starts in the Gulf of Mexico and goes to the Arctic territories of Canada. He was inspired by his father’s love of birdwatching and Paul Gallico’s The Snow Goose (which I haven’t read). I thought this couldn’t fail to be great, what with its themes of travel, birds, illness and identity. However, Fiennes gets bogged down in details. When he stays with friendly Americans in Texas he gives you every detail of their home décor, meals and way of speaking; when he takes a Greyhound bus ride he recounts every conversation he had with his random seatmates. This is too much about the grind of travel and not enough about the natural spectacles he was searching for. And then when he gets up to the far north he eats snow goose. So I ended up just skimming this one for the birdwatching bits. I did like Fiennes’s writing, just not what he chose to focus on, so I’ll read his other memoir, The Music Room.

Considered but quickly abandoned: In the Midst of Winter by Isabel Allende

Would like to read soon: The Snow Leopard by Peter Matthiessen – my husband recently rated this 5 stars and calls it a spiritual quest memoir, with elements of nature and travel writing.

What’s been your snowbound reading this year?