A week from today, on the 14th (my birthday, as well as Susan’s – be sure to wish her a happy one!), this year’s Booker Prize will be announced. The Prize’s longlist didn’t contain much that piqued my interest this time around; I read one book from it and didn’t get on with it well at all, and I also DNFed another three.

Winterson does her darndest to write like Ali Smith here (no speech marks, short chapters and sections, random pop culture references). Cross Smith’s Seasons quartet with the vague aims of the Hogarth Shakespeare project and Margaret Atwood’s The Heart Goes Last and you get this odd jumble of a novel that tries to combine the themes and composition of Frankenstein with the modern possibilities of transcending bodily limitations. Her contemporary narrator is Ry Shelley, a transgender doctor sponsored by the Wellcome Trust who supplies researcher Victor Stein with body parts for his experiments in Manchester. In Memphis for a tech expo, Ry meets Ron Lord, a tactless purveyor of sexbots.

Their interactions alternate with chapters narrated by Mary Shelley in the 1810s; I found this strand much more engaging and original, perhaps because I haven’t read that much about Shelley and her milieu, whereas it feels like I’ve read a lot about machine intelligence and transhumanism recently (To Be a Machine, Murmur, Machines Like Me). I think Winterson’s aim was to link the two time periods through notions of hybridness and resistance to death. It never really came together for me.

Night Boat to Tangier by Kevin Barry – I read the first 76 pages. The other week two grizzled Welsh guys came to deliver my new fridge. Their barely comprehensible banter reminded me of that between Maurice and Charlie, two ageing Irish gangsters. The long first chapter is terrific. At first these fellas seem like harmless drunks, but gradually you come to realize just how dangerous they are. Maurice’s daughter Dilly is missing, and they’ll do whatever is necessary to find her. Threatening to decapitate someone’s dog is just the beginning – and you know they could do it. “I don’t know if you’re getting the sense of this yet, Ben. But you’re dealing with truly dreadful fucken men here,” Charlie warns at one point. I loved the voices; if this was just a short story it would have gotten a top rating, but I found I had no interest in the backstory of how these men got involved in heroin smuggling.

The Wall by John Lanchester – I lost interest in it and wasn’t drawn in by the first pages.

The Man Who Saw Everything by Deborah Levy – I read the first 35 pages. There’s a lot of repetition; random details seem deliberately placed as clues. I’m sure there’s a clever story in here somewhere, but apart from a few intriguing anachronisms (in 1988 a smartphone is just “A small, flat, rectangular object … lying in the road. … The object was speaking. There was definitely a voice inside it”) there is not much plot or character to latch onto. I suspect there will be many readers who, like me, can’t be bothered to follow Saul Adler from London’s Abbey Road, where he’s hit by a car in the first paragraph, to East Berlin.

There’s only one title from the Booker shortlist that I’m interested in reading: Girl, Woman, Other by Bernardine Evaristo. I’ll be reviewing it later this month as part of a blog tour celebrating the Aké Book Festival, but as a copy hasn’t yet arrived from either the publisher or the library I won’t have gotten far into it before the Prize announcement.

As for the other five on the shortlist… 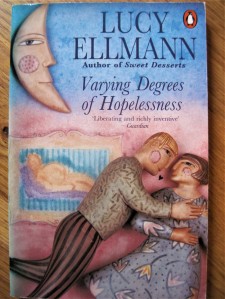 *However, I was delighted to find a copy of her 1991 novel, Varying Degrees of Hopelessness (just 182 pages, with short chapters often no longer than a paragraph and pithy sentences) in a 3-for-£1 sale at our local charity warehouse. Isabel, a 31-year-old virgin whose ideas of love come straight from the romance novels of ‘Babs Cartwheel’, hopes to find Mr. Right while studying art history at the Catafalque Institute in London (a thinly veiled Courtauld, where Ellmann studied). She’s immediately taken with one of her professors, Lionel Syms, whom she dubs “The Splendid Young Man.” Isabel’s desperately unsexy description of him had me snorting into my tea:

He had a masculinity.

His broad shoulders and narrow hips gave him a distinctive physique.

To hold seminars seemed to indicate a wish to develop a rapport with his students.

I swooned in admiration of him.

Unfortunately, the Splendid Young Man is more interested in Isabel’s portly flatmate, Pol. There’s a screwball charm to this campus novel full of love triangles and preposterous minor characters. I laughed at many of Ellmann’s deadpan lines, and would recommend this to fans of David Lodge’s academic comedies. But if you wish to, you could read this as a cautionary tale about the dangers of romantic fantasies. Ellmann even offers two alternate endings, one melodramatic and one more prosaic but believable. I’ll seek out the rest of her back catalogue – so thanks to the Booker for putting her on my radar.

In the meantime, I did a bit better with the “Not the Booker Prize” (administered by the Guardian) shortlist, reading three out of their six:

This strange and somewhat entrancing debut novel is set in Arnott’s native Tasmania. The women of the McAllister family are known to return to life – even after a cremation, as happened briefly with Charlotte and Levi’s mother. Levi is determined to stop this from happening again, and decides to have a coffin built to ensure his 23-year-old sister can’t ever come back from the flames once she’s dead. The letters that pass between him and the ill-tempered woodworker he hires to do the job were my favorite part of the book. In other strands, we see Charlotte traveling down to work at a wombat farm in Melaleuca, a female investigator lighting out after her, and Karl forming a close relationship with a seal. This reminded me somewhat of The Bus on Thursday by Shirley Barrett and Orkney by Amy Sackville. At times I had trouble following the POV and setting shifts involved in this work of magic realism, though Arnott’s writing is certainly striking.

“The Midlands droned on, denuded hill after denuded hill, until I rolled into sprawling suburbs around noon. Here’s a list of the places I’d choose to visit before the capital: hell, anywhere tropical, the Mariana Trench, a deeper pit of hell, my mother’s house.”

My thanks to Atlantic Books for the free paperback copy for review.

The Unauthorised Biography of Ezra Maas by Daniel James: A twisty, clever meta novel about “Daniel James” trying to write a biography of Ezra Maas, an enigmatic artist who grew up a child prodigy in Oxford and attracted a cult following in 1960s New York City, where he was a friend of Warhol et al. (See my full review.)

Supper Club by Lara Williams: A great debut novel with strong themes of female friendship and food. The Supper Club Roberta and Stevie create is performance art, but it’s also about creating personal meaning when family and romance have failed you. (See my full review.)

The other three books on the shortlist are:

(The Not the Booker Prize will be announced on the Guardian website this Friday the 11th.)

Have you read something from the (Not the) Booker shortlist(s)? Any predictions for next week?