Six Degrees of Separation: From Rodham to The Shadow in the Garden

This month we’re all starting with Rodham. I reviewed this Marmite novel as part of the UK blog tour and was fully engaged in its blend of historical and fictional material. Ultimately, it doesn’t work as well as American Wife because we all know too much about Hillary Clinton, but it was a lot of fun for summer binge reading and is a must for any diehard Curtis Sittenfeld fan. 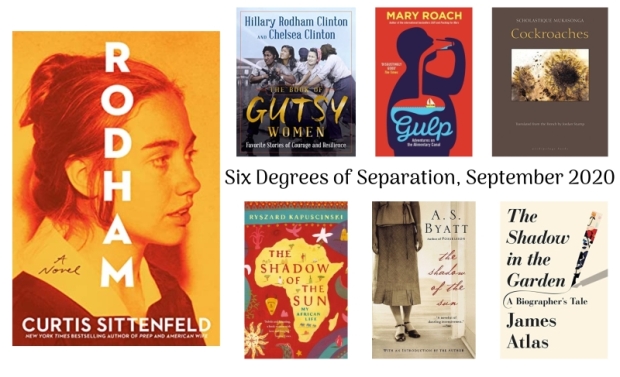 #1 Late last year I was sent an e-copy of The Book of Gutsy Women by Hillary and Chelsea Clinton for a potential review. I didn’t end up reading it at the time, but I still have it on my Kindle so might get to it someday. Like many, many books that have come out over the last few years, it’s full of mini-biographies of praiseworthy women from history. It seems a bit superfluous and overlong, but if the writing is up to snuff it might still be one to skim.

#2 Speaking of guts, earlier in the year I took perverse glee in reading Gulp by Mary Roach, a tour through the body’s digestive and excretory systems. Here’s a quick question to help you gauge whether the book is for you: does the prospect of three chapters on flatulence make you go “Yesssss!” or “Ew, no. Why?!” I’m in the former camp so, for the most part, found it fascinating. Footnotes on bizarre scientific studies are particularly hilarious.

#3 I’ve read two novels with “Roach” in the title; I didn’t want to use Ian McEwan as a link two months in a row, so I went with the other one: Cockroaches by Scholastique Mukasonga, which is also a good follow-on from #WITMonth as it was originally written in French. I reviewed this harrowing memoir of her Tutsi family’s slaughter during the Rwandan genocide of the 1990s for Wasafiri literary magazine in early 2018.

#4 One of the sunny/summer reads I featured last week was The Shadow of the Sun by Ryszard Kapuściński. One essay from the middle of the book is called “A Lecture on Rwanda,” which locates the seeds of the 1990s conflict in the independence struggle and peasant revolt of the late 1950s and early 1960s: the Hutu majority caste (85%) was composed of tenant farmers who rebelled against the cattle-owning Tutsi minority (14%).

#5 I’ve read another book by the title The Shadow of the Sun, this one a weak early novel by A.S. Byatt. It’s about a young woman struggling to get out from under the expectations and example of her father, a literary lion.

#6 Staying in the shadows … my top nonfiction read of 2017 was James Atlas’s memoir of the biographer’s profession, The Shadow in the Garden. The book deals with the nitty-gritty of archival research and how technology has changed it; story-telling strategies and the challenge of impartiality; and how we look for patterns in a life that might explain what, besides genius, accounts for a writer’s skill. Even though I knew little about his two main subjects, poet Delmore Schwartz and Saul Bellow, I found the book thoroughly enthralling.

Join us for #6Degrees of Separation if you haven’t already! (Hosted the first Saturday of each month by Kate W. of Books Are My Favourite and Best; see her intro post.)

Have you read any of my selections?

Are you tempted by any you didn’t know before?

I call it serendipitous when two or more books that I read at the same time or in quick succession have something pretty bizarre in common. Because I have so many books on the go at once (usually around 20), I suppose I’m more prone to such incidents than some. I also list these occasional reading coincidences on Twitter. The following are in rough chronological order. (January to March appeared in this post.)