I call it serendipitous when two or more books that I’m reading at the same time or in quick succession have something pretty bizarre in common. Because I have so many books on the go at once – usually between 10 and 20 – I guess I’m more prone to such incidents. I post these occasional reading coincidences on Twitter. What’s the weirdest one you’ve had lately? (The following are in rough chronological order.) 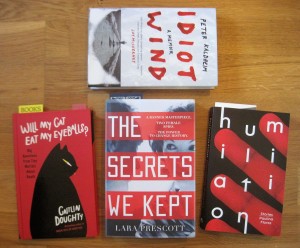 Ask Again, Yes is about the inextricable links that form between two Irish-American policemen’s families in New York. Francis Gleeson and Brian Stanhope meet as cops on the same South Bronx beat in July 1973 and soon move upstate, settling in as close neighbors in the suburb of Gillam. After a stillbirth and a miscarriage, Brian and his wife Anne, who’s from Dublin, finally have a son, Peter. Six months later, Francis and Lena’s third daughter, Kate, is born; from the start it’s as if Peter and Kate are destined for each other. They’re childhood best friends, but then, like Romeo and Juliet, have to skirt around the animosity that grows between their families to be together as adults.

Anne’s mental health issues and the Stanhope family history of alcoholism will lead to explosive situations that require heroic acts of forgiveness. I ached for many characters in turn, especially Lena and Kate. The title sets up a hypothetical question: if you had your life to live again, knowing what the future held, would you have it the same way? Keane suggests that for her characters the answer would be yes, even if they knew about all the bad that was to come alongside the good. Impossible to write any more about the plot without giving too much away, so suffice it to say that this is a wrenching story of the ways in which we repeat our family’s mistakes or find the grace to move on and change for the better.

As strong as the novel’s characterization is, and as intricately as the storyline is constructed around vivid scenes, I found this a challenging read and had to force myself to pick it up for 20 pages a day to finish it in time for my blog tour slot. Simply put, it is relentless. And I say that even though I was reading a novel about a school shooting at the same time. There aren’t many light moments to temper the sadness. (Also, one of my pet peeves in fiction is here: skipping over 15 years within a handful of pages.) Still, I expect Keane’s writing will appeal to fans of Celeste Ng and Ann Patchett – the latter’s Commonwealth, in particular, came to mind right away.

Ask Again, Yes was published by Michael Joseph (Penguin) on August 8th. My thanks to the publisher for the proof copy for review.