When she read my review of As a God Might Be by Neil Griffiths, Liz Dexter suggested Wendy Perriam’s books as readalikes and very kindly sent me one to try: The Stillness The Dancing – a title whose lack of punctuation confused me until I discovered that it’s taken from a line of T. S. Eliot’s “East Coker”: “So the darkness shall be the light, and the stillness the dancing.” It took me nearly a year and a half to get around to it, but I’ve finally read my first Perriam (fairly autobiographical, it seems) and found it very striking and worthwhile. 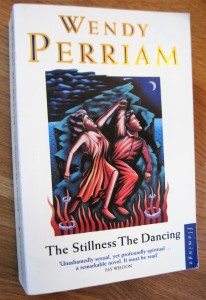 The comparison with the Griffiths turned out to be apt: both are hefty, religion-saturated novels dwelling on themes of purpose, mysticism, asceticism, and the connection between the mind and body, especially when it comes to sex. Perriam’s protagonist is Morna Gordon, a 41-year-old translator. The end of her marriage was nearly as disorienting for her as the loss of her Catholic faith. Occasional chapters spotlight the perspective of the other women in this family line: Morna’s mother, Bea, who’s been a widow for as long as Morna has been alive and finally finds a vocation at an age when most people are retiring; and Morna’s daughter Chris, who’s tasting freedom before starting uni and settling down with her diver boyfriend, Martin.

When Morna accompanies Bea on a week-long religious retreat in the countryside, she meets David Anthony, a younger man she initially assumes is a priest. Here to deliver a lecture on miracles, he’s a shy scholar researching a seventh-century Celtic saint, Abban, who led an austere life on a remote Scottish island. Morna is instantly captivated by David’s intellectual passion, and in lieu of flirting offers to help him with his medieval translations. Still bruised by her divorce, she longs to make a move yet doesn’t want to scare David off. After 14 years of Neil telling her she was frigid, she’s startled to find herself in the role of sexual temptress.

Staid suburban England is contrasted with two very different locales: Saint Abban’s island and the outskirts of Los Angeles, where Morna and Chris travel for a few weeks in January so Chris can spend time with her father and meet his new family: (younger) wife Bunny and Chris’s four-year-old half-brother, Dean. California is “another world completely,” a fever dream of consumerism and excess, and Morna does things that are completely outside her comfort zone, like spending hours submerged in a sensory deprivation tank and breaking down in tears in the middle of Bunny’s women’s consciousness-raising circle.

The differences between England and California are exaggerated for comic effect in a way that reminded me of David Lodge’s Changing Places – but if for Chris it’s all about hedonistic self-expression, for Morna America is more of an existential threat, and she rushes back to be with David. There are several such pivotal moments when Morna flees one existence for another, often accompanied by a time of brain fog: alcohol, sleeping pills or grief disrupt her normal thought processes, as reflected in choppy, repetitive sentences.

I bristled slightly at the melodramatic nature of the final 60 pages, unsure to what extent the ending should be seen as altering the book’s overall message: Morna is denied a full transformation, but it seems she’s still on the spiritual path towards detachment from material things. Though still a lapsed Catholic, she finds some fresh meaning in the Church’s history and rituals. As her mother and daughter both embark on their new lives, her ongoing task is to figure out who she is apart from the connections that have defined her for so many years.

My favorite parts of the novel, not surprisingly, were Morna’s internal monologue – and her conversations with David – about faith and doubt. Perhaps I wasn’t wholeheartedly convinced that all the separately enjoyable components fit together, or that all the strands were fully followed through, but it’s an exuberant as well as a meditative work and I will certainly seek out more from Perriam.

(Morna thinks) “If one had been exhorted all one’s girlhood to live for God alone, then how could one have purpose if He vanished?”

David: “I know our society shies away from any type of self-denial, regards it as neurotic or obsessional, but I disagree with that. Anything worth having is worth suffering for.”

Morna: “Are you still a Catholic? I know you said you believed in God, but that’s not the same, is it?” / David: “I’m still redefining all my terms. That can take a lifetime.”

Author note: Wendy Perriam’s name was completely new to me, though this was her 11th novel. Now in her 70s, she is still publishing fiction, with a crime novel released in 2017.

Across my four best-of posts (Nonfiction was on Wednesday and Fiction on Thursday; Backlist reads are coming up tomorrow), I will have spotlighted roughly the top 20% of my year’s reading. The 15 runners-up below – 5 fiction and 10 nonfiction – are in alphabetical order by author. The ones marked with an asterisk are my Best 2018 Books You Probably Never Heard Of (Unless You Heard about Them from Me!).

*Frieda by Annabel Abbs: If you rely only on the words of D.H. Lawrence, you’d think Frieda was lucky to shed a dull family life and embark on an exciting set of bohemian travels with him as he built his name as a writer; Abbs adds nuance to that picture by revealing just how much Frieda was giving up, and the sorrow she left behind her. Frieda’s determination to live according to her own rules makes her a captivating character.

A Ladder to the Sky by John Boyne: A delicious piece of literary suspense with a Tom Ripley-like hero you’ll love to hate: Maurice Swift, who wants nothing more than to be a writer but doesn’t have any ideas of his own, so steals them from other people. I loved how we see this character from several outside points of view before getting Maurice’s own perspective; by this point we know enough to understand just how unreliable a narrator he is.

The Overstory by Richard Powers: A sprawling novel about regular people who through various unpredictable routes become so devoted to trees that they turn to acts, large and small, of civil disobedience to protest the clear-cutting of everything from suburban gardens to redwood forests. I admired pretty much every sentence, whether it’s expository or prophetic.

You Think It, I’ll Say It by Curtis Sittenfeld: Sittenfeld describes families and romantic relationships expertly, in prose so deliciously smooth it slides right down. These 11 stories are about marriage, parenting, authenticity, celebrity and social media in Trump’s America. Overall, this is a whip-smart, current and relatable book, ideal for readers who don’t think they like short stories.

*Meet Me at the Museum by Anne Youngson: A charming, bittersweet novel composed entirely of the letters that pass between Tina Hopgood, a 60-year-old farmer’s wife in East Anglia, and Anders Larsen, a curator at the Silkeborg Museum in Denmark. It’s a novel about second chances in the second half of life, and has an open but hopeful ending. I found it very touching and wish it hadn’t been given the women’s fiction treatment.

Rough Beauty: Forty Seasons of Mountain Living by Karen Auvinen: An excellent memoir that will have broad appeal with its themes of domestic violence, illness, grief, travel, wilderness, solitude, pets, wildlife, and relationships. A great example of how unchronological autobiographical essays can together build a picture of a life.

*Heal Me: In Search of a Cure by Julia Buckley: Buckley takes readers along on a rollercoaster ride of new treatment ideas and periodically dashed hopes during four years of chronic pain. I was morbidly fascinated with this story, which is so bizarre and eventful that it reads like a great novel.

*This Really Isn’t About You by Jean Hannah Edelstein: A wry, bittersweet look at the unpredictability of life as an idealistic young woman in the world’s major cities. Another great example of life writing that’s not comprehensive or strictly chronological yet gives a clear sense of the self in the context of a family and in the face of an uncertain future.

*The Pull of the River: Tales of Escape and Adventure on Britain’s Waterways by Matt Gaw: This jolly yet reflective book traces canoe trips down Britain’s rivers, a quest to (re)discover the country by sensing the currents of history and escaping to the edge of danger. Gaw’s expressive writing renders even rubbish- and sewage-strewn landscapes beautiful.

The Feather Thief: Beauty, Obsession, and the Natural History Heist of the Century by Kirk Wallace Johnson: A delightful read that successfully combines many genres – biography, true crime, ornithology, history, travel and memoir – to tell the story of an audacious heist of rare bird skins from the Natural History Museum at Tring in 2009. This is the very best sort of nonfiction: wide-ranging, intelligent and gripping.

*No One Tells You This by Glynnis MacNicol: There was a lot of appeal for me in how MacNicol sets out her 40th year as an adventure into the unknown. She is daring and candid in examining her preconceptions and asking what she really wants from her life. And she tells a darn good story: I read this much faster than I generally do with a memoir.

The Library Book by Susan Orlean: This is really two books in one. The first is a record of the devastating fire at the Los Angeles Central Library on April 29, 1986 and how the city and library service recovered. The second is a paean to libraries in general: what they offer to society, and how they work, in a digital age. Sure to appeal to any book-lover.

Help Me!: One Woman’s Quest to Find Out if Self-Help Really Can Change Her Life by Marianne Power: I have a particular weakness for year-challenge books, and Power’s is written in an easy, chatty style, as if Bridget Jones had given over her diary to testing self-help books for 16 months. Help Me! is self-deprecating and relatable, with some sweary Irish swagger thrown in. I can recommend it to self-help junkies and skeptics alike.

Mrs Gaskell & Me: Two Women, Two Love Stories, Two Centuries Apart by Nell Stevens: Stevens has a light touch, and flits between Gaskell’s story and her own in alternating chapters. This is a whimsical, sentimental, wry book that will ring true for anyone who’s ever been fixated on an idea or put too much stock in a relationship that failed to thrive.

The Language of Kindness: A Nurse’s Story by Christie Watson: Watson presents her book as a roughly chronological tour through the stages of nursing – from pediatrics through to elderly care and the tending to dead bodies – but also through her own career. With its message of empathy for suffering and vulnerable humanity, it’s a book that anyone and everyone should read.

Coming tomorrow: My best backlist reads of the year.