Today I’m taking part in the “blog blast” for Painting Time by Maylis de Kerangal (translated from the French by Jessica Moore), which is published today by MacLehose Press.

This is the third novel I’ve read by de Kerangal, after her 2017 Wellcome Book Prize winner, Mend the Living, and 2019’s The Cook. Painting Time resembles the former in the way it revels in niche vocabulary and the latter in that it slowly builds up a portrait of the central character. But all three books could be characterized as deep dives into a particular subject – the human body, gastronomy, and painting, respectively.

The protagonist of Painting Time is Paula Karst, one of 20-some art students who arrive at the Institut de Peinture in Brussels in the autumn of 2007 to learn trompe l’oeil technique. They’re taught to painstakingly imitate every variety of wood and stone so their murals will look as convincing as the real thing. It’s a gruelling course, with many hours spent on their feet every day.

Years later, the only classmates Paula has kept up with are Jonas, her old flatmate, with whom she had a sort-of-almost-not-quite relationship, and their Scottish friend Kate. The novel opens with the three of them having a reunion in Paris. Given this setup, I expected de Kerangal to follow all three characters from 2007 to the near past, but the book sticks closely to Paula, such that the only secondary characters who come through clearly are her parents. 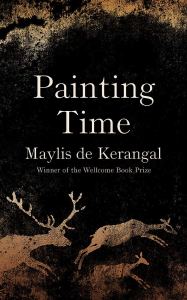 It’s intriguing to see the work that comes Paula’s way after a degree in decorative painting, including painting backdrops for a Moscow-set film of Anna Karenina and the job of a lifetime: working on a full-scale replica of the prehistoric animal paintings of the Lascaux Caves (Lascaux IV). The final quarter of the novel delves into the history of Lascaux, which was discovered in 1940 and open to the public on and off until the late 1960s. Deep time abuts the troubled present as Paula contemplates what will last versus what is ephemeral.

As de Kerangal did with medical terminology in Mend the Living, so here she relishes art words: colours, tools, techniques; names for types of marble and timber (Paula’s own surname is a word for limestone caves). The long sentences accrete to form paragraphs that stretch across multiple pages. I confess to getting a bit lost in these, and wanting more juicy interactions than austere character study. However, the themes of art and history are resonant. If you’ve enjoyed de Kerangal’s prose before, you will certainly want to read this, too.

My thanks to MacLehose Press for access to an e-copy via NetGalley.