The Secrets We Kept by Lara Prescott Blog Tour

“this was not just a book, but a weapon” 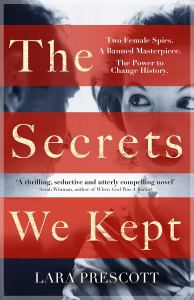 It’s the latest Reese Witherspoon book club selection and film rights have been sold to the producers of La La Land; if you haven’t already heard about The Secrets We Kept, you’ll be hearing a lot more soon. Prescott’s debut novel is an offbeat spy thriller set mostly in the 1950s and based on the international reception of Boris Pasternak’s Doctor Zhivago. Considered to express anti-Soviet opinions, Pasternak’s love story is suppressed in his native country but published widely in Western Europe and further afield. The Central Intelligence Agency, in the belief that books are one way to change ideologies in the long term (“They had their satellites, but we had their books”), decides it is important to make Doctor Zhivago available in its original Russian in the motherland, and duly enrolls two female spies – who have been masquerading as a typist and a receptionist – in the scheme.

First-person narration duties are shared by Olga Vsevolodovna, Pasternak’s lover and the inspiration for Lara in Doctor Zhivago; Irina Drozdova, a new secretary at the Agency; Sally Forrester, the more experienced spy who takes Irina under her wing; Teddy Helms, Irina’s first trainer and would-be romantic interest; and the typist pool as a whole. I have a special love for the first-person plural voice, used as a kind of observant chorus. Here it doesn’t work perfectly: Chapter 17 unnecessarily recaps information readers had already gleaned, while Chapter 20 is a clunky way of revealing more. But the ‘we’ of the title is not just these all-seeing typists (who reminded me of the secretaries in Mad Men), but also Sally and Irina, as well as Olga and her family, who often suffer for their connection with Pasternak. The epilogue carries things through to the present in a hopeful, almost whimsical way.

There’s a lot to appreciate about The Secrets We Kept, including the prominent roles played by women, the surprising place given to a same-sex relationship, and the glimpses into publishing and literary history. Prescott might have included more about Doctor Zhivago itself, though. The plot will most likely be unfamiliar to today’s readers. (I saw the film nearly 20 years ago and remember nothing.) Including more passages and some careful plot summary might have tempted more readers to try Pasternak’s work as we approach the 60th anniversary of his death in 2020. Still, this is in a very easy-reading style that lends itself to binges, and it nicely bridges the gap between literary fiction and spy stories.

Recommended to: Readers of Jessie Burton and Whitney Scharer; viewers of The Americans.

The Secrets We Kept was published by Hutchinson on September 3rd. My thanks to the publisher for the proof copy for review.