There’s no doubt about it: fans of Lucy Maud Montgomery’s Anne series will throng to read Sarah McCoy’s prequel. McCoy was inspired by the brief moment in Anne of Green Gables when Marilla tells Anne that John Blythe used to be her beau. Just like Anne, she wanted to know the story behind that offhand remark.

So although Marilla of Green Gables begins in 1876 with a short prologue in which Matthew and Marilla decide to ‘get a boy’ to help around the place, most of it is set in 1837–8, with Marilla taking a break from her schooling to assist her parents, Hugh and Clara (it’s no coincidence that these are the names of L.M. Montgomery’s parents), in the months before her new sibling is to arrive. Brother Matthew is 21 and testing out adulthood, but Marilla is just 13 and impressionable. John Blythe offers to bring her the school readings she’s missed out on, and later invites her to the Avonlea May Picnic. It’s clear she’s smitten.

Aunt Izzy, a dressmaker from St. Catharines, arrives in time to cheer her twin sister through the impending birth and ends up being Marilla’s new role model. She’s fanciful, exuberant and spontaneous and believes “A young girl needs as much time to dream as possible,” surely making her a deliberate precursor of Anne Shirley. Indeed, much of the fun of reading this book is in spotting the seeds of the Anne books: Clara and Izzy making their famous redcurrant wine and laughing about the time Clara lost a thumbnail in the mix; meeting Rachel White (Lynde) at a sewing circle; a visit to the orphanage in Hopetown; raspberry cordial at a picnic; the Ladies’ Aid Society; and looking to a mistake-free tomorrow.

Before long, though, personal and political upheaval take their toll at Green Gables and drive a wedge between Marilla and John. I found Part Two significantly less engaging, what with all the talk of Reformers versus Loyalists (though I did enjoy glimpses of escaped slaves’ experiences in Canada). I tend not to read anything approaching a romance novel, so I groaned to find that there’s not one but two Mr. Darcy-esque wet-shirt scenes featuring John.

This is not meant to be a substitute for reading Montgomery’s own work; if anything it’s prompted me to reread the original series as soon as I can. While I wouldn’t call Marilla a must-read for fans, then, if you enjoy women’s historical fiction set in the nineteenth century, you may want to pick up this companion volume anyway.

Marilla of Green Gables was published by William Morrow on October 23rd. My thanks to publicist Beth Parker for the proof copy for review. Sarah McCoy is the author of four previous works of fiction, including The Mapmaker’s Children and The Baker’s Daughter.

I love book lists: ticking off what I’ve read from newspaper and website selections, comparing my “best-of” choices and prize predictions with other people’s, and making up my own thematic inventories. Earlier in the year I spotted Desert Island-style 100-book lists on Annabookbel and A life in books, as well as Lonesome Reader’s reconsideration of the 100 favorite books he’d chosen half a lifetime ago. For my 35th birthday today, I’ve looked back at my “Absolute Favorites” shelf on Goodreads  and picked the 35 titles that stand out the most for me: some are childhood favorites, some are books that changed my thinking, some I have read two or three times (an extreme rarity for me), and some are recent discoveries that have quickly become personal classics. I’ve listed these in rough chronological order of when I first read them, rather than ranking them, which would be nigh on impossible! Perhaps I’ll revisit the list on future significant birthdays and see how things change. Interesting to note that this works out as about two-thirds fiction and one-third nonfiction.

Are any of these among your favorites, too?

I have way too much to say about this terrific debut novel, and there’s every danger of me slipping into plot summary because, though it seems lighthearted on the surface, there’s a lot of meat to this story of the long friendship between two female animators. So I’m going to adapt a format that has worked well for other bloggers (e.g. Carolyn at Rosemary and Reading Glasses) and pull out four reasons why you must be sure not to miss this book.

She was the first person to see me as I had always wanted to be seen. It was enough to indebt me to her forever.

The work will always be with you, will come back to you if it leaves, and you will return to it to find that you have, in fact, gotten better, gotten sharper. It happens to you while you are asleep inside.

I used it to hate it here. How could I have possibly hated this? This is me. I sprang from this place.

I thought the timeline could be a little tighter and the novel was unnecessarily crass in places. For me, the road trips were the best bits and the rest never quite matched up. But this is still bound to be one of my top novels of the year. I think every reader will see him/herself in Sharon, and we all know a Mel; for some it might be the other way around. Like A Little Life and even The Essex Serpent, this asks how friendship and work can carry us through. Meanwhile, the cartooning world and the Kentucky–New York City dichotomy together feel like a brand new setting for a literary tragicomedy.

The Animators was published by Random House and Scribe UK on January 31st. My thanks to Sophie Leeds of Scribe for sending a free copy for review.

I initially wanted to title this post “Books that Changed My Life,” but soon realized it would probably be more accurate to speak about them as the books that have shaped my life as a keen reader and meant the most to me as the years have passed.

In making this list I was inspired by a book I recently finished, Kate Gross’s memoir Late Fragments, which finishes with a bibliography of books that influenced her during different periods of her life. Gross, who died of colon cancer at age 36 in 2014, divides her reading life into five distinct, whimsically named eras: “With my back to the radiator” (childhood), “The grub years” (adolescence), “Emerging from the cocoon” (early adulthood), “The woman in the arena” (career life) and “End of life book club.”

I’ll do a follow-up post on the key books from my twenties next month, but for now I want to focus on the books that defined my growing-up and teen years.

What Bewick’s Birds was for Jane Eyre, my parents’ book on flower arranging was for me. I couldn’t tell you the title or author, but I think this green fabric covered tome with its glossy pages and lush full-color photographs was the origin of my love of books as physical objects. I must have spent hours paging through the illustrations and breathing in the new-book aroma. I’ve been a book sniffer ever since.

I can’t recall many of the individual picture books my mother read with me when I was little, but one that does stand out in my memory is Miss Rumphius by Barbara Cooney, about an eccentric woman who goes about planting lupines. Again, it’s a gorgeous book filled with flowers – you’d think I might have become a botanist!

C.S. Lewis’s The Chronicles of Narnia were the first books I ever read by myself, starting at age five. It took me years to get to the allegory-heavy The Last Battle, but I read the other volumes over and over, even after the PBS television movies came out. The Silver Chair was always my favorite, but I’m sure I must have read the first three books 10 or 20 times each.

Richard Adams’s Watership Down was the first book I ever borrowed from the adult section of the public library, at age nine. Crossing the big open lobby of the Silver Spring, Maryland library from the children’s room to the imposing stacks of Adult Fiction was like a rite of passage; when I emerged clutching the fat plastic-covered hardback I felt a little bit like a rebel but mostly just pretty darn proud of myself. I inhaled the several hundred pages of this bunny epic and for years afterwards considered it my favorite book.

Nowadays I don’t like to commit to series, but as a kid I couldn’t get enough of them: after Narnia, I devoured the Babysitter’s Club and Saddle Club books, the Anastasia Krupnik books, and so on. Whenever I found an author I loved I dutifully read everything they’d written. The Anne of Green Gables series by L.M. Montgomery, in particular, accompanied me through my early teen years. I think I saw the CBC/PBS television miniseries starring Megan Follows first and read the books afterwards. Bereft once the eight-book cycle was over, I read the much darker Emily trilogy, but it just couldn’t live up to the Anne books.

My first foray into the realm of heavy-duty classics was Charles Dickens’s David Copperfield at age 14. I bought a battered secondhand paperback from a library sale and was immediately entranced, from the first line onwards: “Whether I shall turn out to be the hero of my own life, or whether that station will be held by anybody else, these pages must show.” No doubt the idea of discovering my own potential heroism was what drew me in, but I loved everything about this novel: the rich panorama of nineteenth-century life, the vibrant secondary characters, the under-the-surface humor you had to work a little bit to understand, and the sweet second-chance romance. This was the start of my love affair with Victorian literature. I’ve read it three times since then. If ever asked for my favorite book, this is what I name. 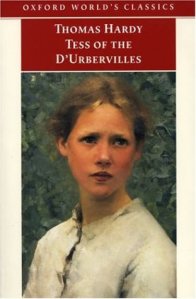 It wasn’t my first Hardy novel (that was Far from the Madding Crowd, another all-time favorite), but Tess of the D’Urbervilles is most memorable for the circumstances in which I read it. At age 19 I accompanied my sister, who’d won a singing contest on local radio, to the Season 2 finale of American Idol in Hollywood. If you were a loyal viewer, you might recall that this was the showdown between Ruben Studdard and Clay Aiken, on whom I had a hopeless crush – it later emerged that he’s gay. I read Tess on the flight to Los Angeles. Stranger pairings have been known, I’m sure, but I’ll never forget that disconnect between bleak England (where I hadn’t yet been at that point) and the sunny entertainment capital.

What are some of the books that meant the most to you in your early years?