Annabel’s readalong was the excuse I needed to try something by children’s fantasy author Susan Cooper – she’s one of those much-beloved English writers who happened to pass me by during my upbringing in the States. I’ve been aware of The Dark Is Rising (1973) for just a few years, learning about it from the Twitter readalong run by Robert Macfarlane. (My husband took part in that, having also missed out on Cooper in his childhood.) 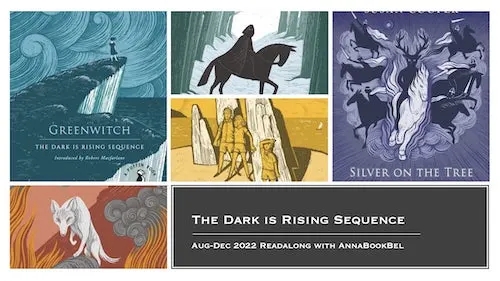 Christmas is approaching, and with it a blizzard, but first comes Will Stanton’s birthday on Midwinter Day. A gathering of rooks and a farmer’s ominous pronouncement (“The Walker is abroad. And this night will be bad, and tomorrow will be beyond imagining”) and gift of an iron talisman are signals that his eleventh birthday will be different than those that came before. While his large family gets on with their preparations for a traditional English Christmas, they have no idea Will is being ferried by a white horse to a magic hall, where he is let in on the secret of his membership in an ancient alliance meant to combat the forces of darkness. Merriman will be his guide as he gathers Signs and follows the Old Ones’ Ways.

I loved the evocation of a cosy holiday season, and its contrast with the cosmic conflict going on under the surface.

He was not the same Will Stanton that he had been a very few days before. Now and forever, he knew, he inhabited a different timescale from that of everyone he had ever known or loved…But he managed to turn his thoughts away from all these things, even from the two invading, threatening figures of the Dark. For this was Christmas, which had always been a time of magic, to him and to all the world. This was a brightness, a shining festival, and while its enchantment was on the world the charmed circle of his family and home would be protected against any invasion from outside.

The bustling family atmosphere is reminiscent of Madeleine L’Engle’s children’s books (e.g., Meet the Austins), as is the nebulous world-building (A Wrinkle in Time) – I found little in the way of concrete detail to latch onto, and like with Alan Garner’s The Owl Service, I felt out of my depth with the allusions to local legend. Good vs. evil battles are a mainstay of fantasy and children’s fiction, like in J.R.R. Tolkien’s books, or The Chronicles of Narnia I read over and over between the ages of about five and nine. Had I read this, too, as a child, I’m sure I would have loved it, but I guess I’m too literal-minded an adult these days; it’s hard for me to get swept up in the magic. See also Annabel’s review. (Public library)

For a small fee (the proceeds went to The Arts Emergency Fund), I joined in this Zoom event hosted by Headline Books and Tandem Collective yesterday evening to learn about 10 of the publisher’s major 2023 releases.

Six of the authors were interviewed live by Sarah Shaffi; the other four had contributed pre-recorded video introductions. Here’s a super-brief rundown, in the order in which they appeared, with my notes on potential readalikes:

Two girls at a restrictive Nigerian boarding school tap into their power as “Leopard People” to bring back their missing fathers and achieve more than anyone expects of them.

A Pebble in the Throat by Aasmah Mir (2 March)

A memoir contrasting her upbringing in Glasgow with her mother’s in Pakistan, this promises to be thought-provoking on the topics of racism and gender stereotypes.

In 1834 Barbados, a former slave leaves her sugarcane plantation to find her five children. Shearer is a mixed-race descendant of Windrush immigrants and wanted to focus not so much on slavery as on its aftermath and the effects of forced dispersion.

In a Northern seaside town, Ted is dumped by his husband and decides to pursue his dream of becoming a drag queen.

As a baby, Anna was left by the side of the road*; now she’s found her birth mother, just as she learns she’s pregnant herself. Described as a darkly comic thriller à la Single White Female.

(*Burdess had forgotten that this really happened to her best childhood friend; her mum had to remind her of it!)

Sounds like: A Crooked Tree or When the Stars Go Dark

Me, Myself and Mini Me by Charlotte Crosby (2 March)

A reality TV star’s memoir of having a child after an ectopic pregnancy.

Sounds like: Something Katie Price would ‘write’. I had not heard of this celebrity author before and don’t mean to sound judgmental, but the impression made by her appearance (heavily altered by cosmetic surgery) was not favourable.

All the Little Bird Hearts by Viktoria Lloyd-Barlow (2 March)

In the Lake District in the 1980s, Sunday is an autistic mother raising a daughter, Dolly. The arrival of glamorous next-door neighbours upends their lives.

The Year of the Cat by Rhiannon Lucy Cosslett (19 January)

A work of creative nonfiction about adopting a cat named Mackerel (who briefly appeared on the video) during lockdown, and deciding whether or not to have a child.

The Book of Eve by Meg Clothier (30 March)

Set in Northern Italy in 1500, this is about a convent librarian who discovers a rich tradition of goddess worship that could upend the patriarchy.

The Housekeepers by Alex Hay (6 July)

A historical heist novel set in 1905, this is about Mrs King, a Mayfair housekeeper who takes revenge for her dismissal by assembling a gang of disgruntled women to strip her former employer’s house right under her nose during a party.

If there was a theme to the evening, it was women’s power!

I’m most keen to read The Year of the Cat, but I’d happily try 3–4 of the novels if my library acquired them.

Which of these 2023 releases appeal to you most?