I have a big backlog of review books piled beside my composition station (a corner of the lounge by the front window; an ancient PC inherited from my mother-in-law and not connected to the Internet; a wooden chair with leather seat that had been left behind in a previous rental house’s garage). Nonfiction November is the excuse I need to finally get around to writing about lots of them; at least one more catch-up will be coming later this month. My apologies to the publishers for the brief reviews.

Today I have a therapist’s take on classic literature, an optimist’s research on data use, a journalist’s response to her sister’s and father’s deaths, a professor’s search for the remnants of Charles Darwin at his family home, and a bibliophile’s tales of book-collecting exploits.

How to Live. What to Do.: In Search of Ourselves in Life and Literature by Josh Cohen

“Literature and psychoanalysis are both efforts to make sense of the world through stories, to discover the recurring problems and patterns and themes of life. Read and listen enough, and we soon come to notice how insistently the same struggles, anxieties and hopes repeat themselves down the ages and across the world.” 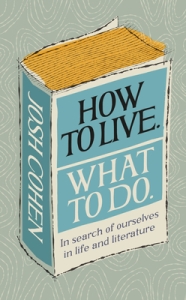 This is the premise for Cohen’s work life, and for this book. Moving through the human experience from youth to old age, he examines anonymous case studies and works of literature that speak to the sorts of situations encountered in that stage. For instance, he recommends Alice in Wonderland as a tonic for the feeling of being stuck – Lewis Carroll’s “let’s pretend” attitude can help someone return to the playfulness and openness of childhood. William Maxwell’s They Came Like Swallows, set during the Spanish flu, takes on new significance for Cohen in the days of Covid as his appointments all move online; he also takes from it the importance of a mother for providing emotional security. A bibliotherapy theme would normally be catnip for me, but I often found the examples too obvious and the discussion too detailed (and thus involving spoilers). Not a patch on The Novel Cure.

(Ebury Press, February 2021.) With thanks to the publicist for the free copy for review.

Good Data: An Optimist’s Guide to Our Digital Future by Sam Gilbert 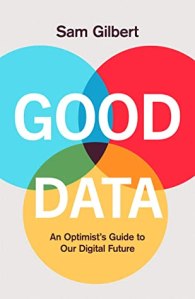 Gilbert worked for Experian before going back to university to study politics; he is now a researcher at the Bennett Institute for Public Policy at the University of Cambridge. At a time of much anxiety about “surveillance capitalism,” he seeks to provide reassurance. He explains that Facebook and the like, with their ad-based business models, use profile data and behavioural data to make inferences about you. This is not the same as “listening in,” he is careful to assert. Gilbert contrasts broad targeting and micro-targeting, and runs through trends in search data. He highlights instances where social media and data mining have been beneficial, such as in creating jobs, increasing knowledge, or aiding communication during democratic protests. I have to confess that a lot of this went over my head; I’d overestimated my interest in a full book on technology, having reviewed Born Digital earlier in the year.

(Welbeck, April 2021.) With thanks to the publisher for the proof copy for review.

The Consequences of Love by Gavanndra Hodge (2020) 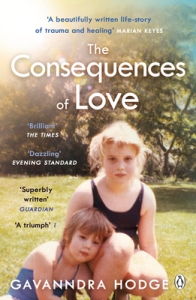 In 1989, Hodge’s younger sister Candy died on a family holiday in Tunisia when a rare virus brought on rapid organ failure. The rest of the family exhibited three very different responses to grief: her father retreated into existing addictions, her mother found religion, and she went numb and forgot her sister as much as possible – despite having a photographic memory in general. After her father’s death, Hodge finally found the courage to look back to her early life and the effect of Candy’s death. Hers was no ordinary upbringing; her father was a drug dealer who constantly disappointed her and from her teens on roped her into his substance abuse evenings. Often she was the closest thing to a sober and rational adult in the drug den their home had become. This is a very fluidly written bereavement memoir and a powerful exploration of memory and trauma. It was unfortunate that it felt that little bit too similar to a couple of other books I’ve read in recent years: When I Had a Little Sister by Catherine Simpson and especially Featherhood by Charlie Gilmour.

(Paperback: Penguin, July 2021.) With thanks to the publicist for the free copy for review.

The Ghost in the Garden: In Search of Darwin’s Lost Garden by Jude Piesse 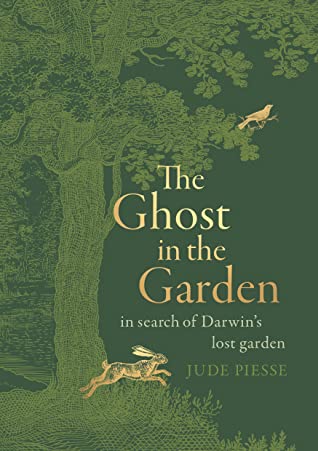 When Piesse’s academic career took her back to her home county of Shropshire, she became fascinated by the Darwin family home in Shrewsbury, The Mount. A Victorian specialist, she threw herself into research on the family and particularly on the traces of the garden. Her thesis is that here, and on long walks through the surrounding countryside, Darwin developed the field methods and careful attention that would serve him well as the naturalist on board the Beagle. Piesse believes the habit of looking closely was shared by Darwin and his mother, Susannah. The author contrasts Susannah’s experience of childrearing with her own – she has two young daughters when she returns to Shropshire, and has to work out a balance between work and motherhood. I noted that Darwin lost his mother early – early parent loss is considered a predictor of high achievement (it links one-third of U.S. presidents, for instance).

I think what Piesse was attempting here was something like Rebecca Mead’s wonderful My Life in Middlemarch, but the links just aren’t strong enough: There aren’t that many remnants of the garden or the Darwins here (all the family artefacts are at Down House in Kent), and Piesse doesn’t even step foot into The Mount itself until page 217. I enjoyed her writing about her domestic life and her desire to create a green space, however small, for her daughters, but this doesn’t connect to the Darwin material. Despite my fondness for Victoriana, I was left asking myself what the point of this project was.

(Scribe, May 2021.) With thanks to the publisher for the free copy for review.

White Spines: Confessions of a Book Collector by Nicholas Royle 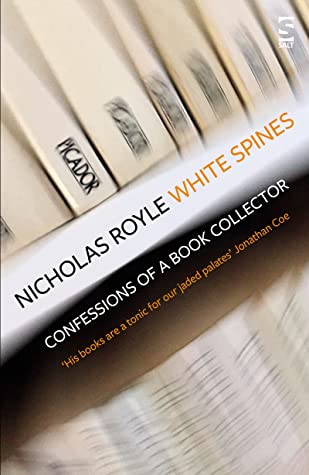 From the 1970s to 1990s, Picador released over 1,000 paperback volumes with the same clean white-spined design. Royle has acquired most of them – no matter the author, genre or topic; no worries if he has duplicate copies. To build this impressive collection, he has spent years haunting charity shops and secondhand bookshops in between his teaching and writing commitments. He knows where you can get a good bargain, but he’s also willing to pay a little more for a rarer find. In this meandering memoir-of-sorts, he ponders the art of cover design, delights in ephemera and inscriptions found in his purchases (he groups these together as “inclusions”), investigates some previous owners and the provenance of his signed copies, interviews Picador staff and authors, and muses on the few most ubiquitous titles to be found in charity shops (Once in a House on Fire by Andrea Ashworth, Bridget Jones’s Diary by Helen Fielding, anything by Kathy Lette, and Last Orders by Graham Swift). And he does actually read some of what he buys, though of course not all, and finds some hidden gems.

In 2013 I read Royle’s First Novel, which also features Picador spines on its cover and a protagonist obsessed with them. I’d read enthusiastic reviews by fellow bibliophiles – Paul, Simon, Susan – so couldn’t resist requesting White Spines. While I enjoyed the conversational writing, ultimately I thought it quite an indulgent undertaking (especially the records of his dreams!), not dissimilar to a series of book haul posts. The details of shopping trips aren’t of much interest because he’s solely focused on his own quest, not on giving any insight into the wider offerings of a shop or town, e.g., Hay-on-Wye and Barter Books. But if you’re a fan of Shaun Bythell’s books you may well want to read this too. It’s also a window into the collector’s mindset: You know Royle is an extremist when you read that he once collected bread labels!

(Salt Publishing, July 2021.) With thanks to the publicist for the free copy for review.

Are you interested in reading one or more of these?

I call it Book Serendipity when two or more books that I read at the same time or in quick succession have something pretty bizarre in common. Because I have so many books on the go at once (usually 20‒30), I suppose I’m more prone to such incidents.

Josh Cohen’s How to Live. What to Do, a therapist’s guide to literature, explains why this might happen:

More than one writer – the French poet Stéphane Mallarmé, the Argentinian writer Jorge Luis Borges – has advanced the exhilarating idea that each book is an infinitesimally small piece of one single, endless Book. I’ve always felt that this idea, unlikely as it might sound, makes perfect sense if you read enough novels [also nonfiction, for me]. The incidents, descriptions, phrases and images in the book you’re reading will always recall the incidents in another, and those in turn will call up the incidents in another, so that even as you’re reading one book, you’re reading countless others.