When I was offered a copy of this novel to review as part of the blog tour, I was unfamiliar with the name of its subject, the artist Sir Stanley Spencer (1891–1959) – until I realized that he painted the WWI-commemorative Sandham Memorial Chapel in Hampshire, which I had never visited* but knew was just 5.5 miles from our home in Berkshire.

Take another look at the title, though: two characters are given double billing, the second of whom is Elsie Munday, who in the opening chapter presents herself for an interview with Stanley and his wife, Hilda (also a painter), who promptly hire her to be their housemaid at Chapel View in 1928. This creates a setup similar to that in Girl with a Pearl Earring, with a lower-class character observing the inner workings of an artist’s household and giving plain-speaking commentary on what she sees. Upson’s close third-person narration sticks with Elsie for the whole of Part I, but in Part II the picture widens out, with the point of view rotating between Hilda, Elsie and Dorothy Hepworth, the reluctant third side in a love triangle that develops between Stanley and her partner, Patricia Preece.

Hilda and Stanley argue about everything, from childrearing to art: they even paint dueling portraits of Elsie – with Hilda’s Country Girl winning out. Elsie knows she’s lucky to have such a comfortable position with the Spencers and their daughters at Burghclere, and later at Cookham, but she’s uneasy at how Stanley turns her into a confidante in his increasingly tempestuous marriage. Hilda, frustrated at Stanley’s selfish, demanding ways, often returns to her family home in Hampstead, leaving Elsie alone with her employer. Stanley doesn’t give a fig for local opinion, but Elsie knows she has a reputation to protect – especially considering that her moments alone with Stanley aren’t entirely free of sexual tension.

I love reading about artists’ habits – how creative work actually gets done – so I particularly loved the scenes where Elsie, sent on errands, finds Stanley up a ladder in the chapel, pondering how to get a face or object just right. On more than one occasion he borrows her kitchen items, such as a sponge and cooked and uncooked rashers of bacon, so he can render them perfectly in his paintings. I also loved that this is a local interest book for me, with Newbury, where I live, mentioned four or five times in passing as the nearest big town. Part II, with its account of Stanley’s extramarital doings becoming ever more sordid, didn’t grip me as much as Part I, but I found the whole to be an elegantly written study of a very difficult man and the ties that he made and broke over the course of several decades.

For the tone as well as the subject matter, I would particularly recommend it to readers of Jonathan Smith’s Summer in February and Graham Swift’s Mothering Sunday, and especially Esther Freud’s Mr. Mac and Me.

Stanley and Elsie will be published by Duckworth on May 2nd. My thanks to the publisher for the proof copy for review. They also sent a stylish tote bag! 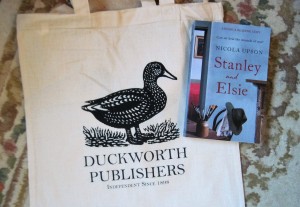 Nicola Upson is best known for her seven Josephine Tey crime novels. She has also published nonfiction, including a book on the sculpture of Helaine Blumenfeld. This is her first stand-alone novel.

*Until now. On a gorgeous Easter Saturday that felt more like summer than spring, I had my husband drop me off on his way to a country walk so I could tour the chapel. I appreciated Spencer’s “holy box” so much more having read the novel than I ever could have otherwise – even though the paintings were nothing like I’d imagined from Upson’s descriptions. 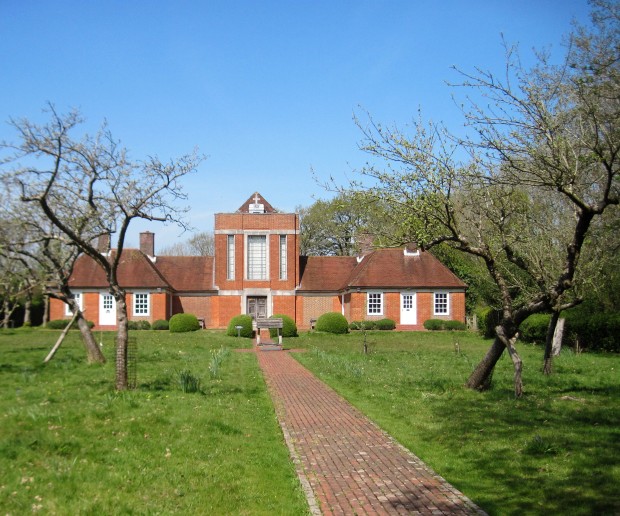 You enter the chapel through the wooden double doors at the center.

What struck me immediately is that, for war art, the focus is so much more on domesticity. Spencer briefly served in Salonika, Macedonia (like his patrons’ brother, Harry Sandham, to whose memory the chapel is dedicated), but had initially been rejected by the army and started off as a medical orderly in an English hospital. Both Salonika and Beaufort hospital appear in the paintings, but there are no battle scenes or bloody injuries. Instead we see tableaux of cooking, doing laundry, making beds, inventorying kitbags, filling canteens, reading maps, dressing under mosquito nets and making stone mosaics. It’s as if Spencer wanted to spotlight what happens in between the fighting. These everyday activities would have typified the soldiers’ lives more than active combat, after all.

I was reminded of how Stanley explains his approach in the novel:

“There’s something heroic in the everyday, don’t you think?”

“Isn’t that what peace is sometimes? A succession of bland moments? We have to cherish them, though, otherwise what was the point of fighting for them?”

The paintings show inventive composition but are in an unusual style that sometimes verges on the grotesque. Many of the figures are lumpen and childlike, especially in Tea in the Hospital Ward, where the soldiers scoffing bread and jam look like cheeky schoolboys. There are lots of animals on display, especially horses and donkeys, but they often look enormous and not entirely realistic. The longer you look, the more details you spot, like a dog raiding a stash of Fray Bentos tins and a young man looking at his reflection in a picture frame to part his hair with a comb. These aren’t desolate, burnt-out landscapes but rich with foliage and blossom, even in Macedonia, which recalls the Holy Land and seems timeless.

Spencer’s self-portrait from 1959, the year he died.

The central painting behind the altar, The Resurrection of the Soldiers, imagines the dead rising out of their graves, taking up their white crosses and delivering them to Jesus, a white-clad figure in the middle distance. There’s an Italian Renaissance feeling to this one, with one face in particular looking like it could have come straight out of Giotto (an acknowledged influence on Spencer’s chapel work). It’s as busy as Bosch, but not as dark thematically or in terms of the color scheme – while some of the first paintings in the sequence, like the one of scrubbing hospital floors, recall Edward Hopper with their somber realism. We see all these soldiers intact: at their resurrection they are whole, with no horrific wounds or humiliating nudity. Like Stanley says to Elsie, it’s more heaven than war. 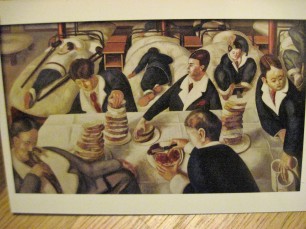 Photos of postcards; no photography is allowed inside.

If you are ever in the area, I highly recommend even a quick stop at this National Trust property. I showed a few workers my advanced copy of the novel; while the reception staff were unaware of its existence, a manager I caught up with after my tour knew about it and had plans to read it soon. She also said they will stock it in the NT shop on site.

With summer winding down, I decided it was time to read a couple of books with the word in the title to try to keep the season alive. These turned out to be charming, low-key English novels that I would recommend to fans of costume dramas. Both:

I knew very little about Jonathan Smith’s Summer in February when I picked it up in a charity shop. From the ads for the 2013 film adaptation with Dan Stevens, I had in mind that this was an obscure classic. It was actually published in 1995, but is inspired by real incidents spanning 1909 to 1949. It’s set among a group of Royal Academy-caliber artists in Lamorna, Cornwall, including Alfred Munnings, who went on to become the academy’s president.

The crisis comes when Munnings and Captain Gilbert Evans, a local land manager, fall for the same woman. A love triangle might not seem like a very original story idea, but I enjoyed this novel particularly for its Cornish setting (“From dawn to dusk it had rained non-stop, as only Cornwall can”; “The sea was slate grey and the sky streaky bacon”) and for the larger-than-life Munnings, who has a huge store of memorized poetry and is full of outspoken opinions. Two characters describe his contradictions thusly: “I can see he’s crude and loud and unpolished and Joey says he cuts his toenails at picnics but…”; “he’s one in a million, a breath of fresh air, and he’s frank and fearless, which is always a fine thing.” The title refers to the way that love can make any day feel like summer.

The cover image is the painting Morning Ride by A.J. Munnings.

From 1961, In a Summer Season was Elizabeth Taylor’s eighth novel. The ensemble cast is led by Kate Heron – newly remarried to Dermot, a man ten years her junior, after the death of her first husband – and made up of her family circle, a few members of the local community, and her best friend Dorothea’s widower and daughter, who return from living abroad about halfway through the book. Set in the London commuter belt, this is full of seemingly minor domestic dilemmas that together will completely overturn staid life before the end.

From Kate dyeing her hair yet being keen to avoid accusations of “mutton dressed as lamb” to her son Tom’s disgust at his grandfather’s ageing body, old age and wasting one’s time on trivialities are a twin paranoia here. The title is not only a literal note of when much of the action takes place, but also a metaphor for the fleeting nature of happiness (as well as life itself). Kate remembers pleasant days spent with her best friend and their young children: “It was a long summer’s afternoon and it stood for all the others now. There had been many. And she and Dorothea were together day after day. Their friendship was as light and warming as the summer’s air.”

So much happens in the last seven pages. I wished the book could have turned out differently, yet the conclusion effectively sews it all up, and all within a cozy 220 pages. If you enjoy writers like Muriel Spark and Barbara Pym, you must try Elizabeth Taylor. Her work is similarly built around wry, perceptive observations about relationships and ways of life. This was my fourth novel by her, and I’d call it my second favorite so far after Mrs. Palfrey at the Claremont.

(Secondhand books are such good value: These two charity shop paperbacks cost me less than 85 pence in total. Such a low total spend per hour of enjoyment!)

This month I also read The Summer without Men by Siri Hustvedt (discussed here along with a few other recent reads). Earlier in the year I reviewed Ricarda Huch’s The Last Summer, and last year I reviewed the Summer anthology from the Wildlife Trusts. “Summer” turns up fairly frequently in titles of books I’ve read or want to read, in fact. Here’s the whole list!

Have you read any “Summer” books lately?