Why We Write about Ourselves: Twenty Memoirists on Why They Expose Themselves (and Others) in the Name of Literature 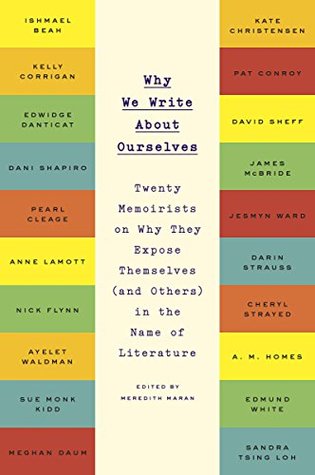 A great collection of first-person pieces from memoir authors, charting their individual journeys into autobiographical writing and giving their top tips. Opinions vary as to whether you have to get the approval of the people who appear in your work – some think that’s essential; others simply change the names and get on with it. Sometimes this has led to fallout within families. One thing everyone agrees on, though, is that a memoir has to be as carefully crafted as any novel, with a clear narrative arc and distinctive dialogue and scenes. My favorite pieces were from Kate Christensen, Edwidge Danticat and Darin Strauss.

Can’t We Talk about Something More Pleasant? 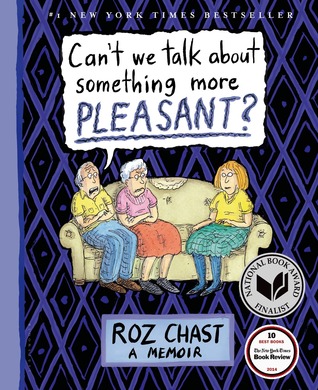 Memoir + graphic novel = graphic memoir. This one’s about her parents’ aging, senility and death yet still manages to be laugh-out-loud funny. It also includes photos of her parents’ apartment filled with ancient stuff they’d hoarded and a touching series of sketches she made of her mother while she was dying. This and Fun Home are the two best graphic memoirs I’ve read. A favorite line, uttered when her mother bounced back temporarily from hospice care: “Where, in the five Stages of Death, is EAT TUNA SANDWICH?!?!?”

“Food is intimate. We take it into our bodies. When we gather at the table with friends and family, we’re gathering to affirm something.” The title doesn’t lie – these essays are terrific. There wasn’t a single one I didn’t find interesting, whether the topic was lab meat; seeking out the perfect burger, Bolognese sauce or gumbo; particular chefs or restaurants; food fads; starting a simple meatball supper club; or feeding picky kids. A couple favorites were “Finding Home at Taco Bell” by John DeVore and “The One Ingredient that Has Sustained Me during Bouts of Leukemia” by Jim Shahin. This series has been running since 2000, but this is the first time I’ve picked up one of the books. I’ll be looking out for it again next year.

Utterly absorbing historical fiction. What with the remote setting and the threat of Cold War or nuclear fallout, this is reminiscent of The Last Pilot and The Wives of Los Alamos, but more engaging than either of those. You may also see hints of Richard Yates or even Tom Perrotta’s Little Children in the story of a marriage strained to the breaking point. Each character is fully explored and the early 1960s atmosphere is completely convincing. A great debut and an author I’d like to hear more from.

Your Heart Is a Muscle the Size of a Fist

A hard-hitting novel with an unforgettably resonant title, this is set at the 1999 Seattle WTO protest. Yapa explores the motivations and backstories of activists, police officers, and delegates as the day deteriorates into violence. The novel flows pretty much effortlessly. Yapa’s writing style is closest to Smith Henderson’s (Fourth of July Creek): short, verbless sentences alternate with long, lyrical ones; there’s plenty of repetition and rhetorical questions, but it remains accessible rather than overblown. This fine debut novel is about cultivating the natural compassion in your heart even while under the threat of the fist.

My rating for all: