Only two months since my last Book Serendipity entry, and already another 17 occurrences! I post these occasional reading coincidences on Twitter and/or Instagram. I call it serendipitous when two or more books that I’m reading at the same time or in quick succession have something pretty bizarre in common. Because I have so many books on the go at once – usually between 10 and 20 – I guess I’m more prone to such incidents. What’s the weirdest one you’ve had lately? (The following are in rough chronological order.)

Three May–June releases: A fish-out-of-water comic novel about teaching English in Prague; and memoirs about acting like an extrovert and giving birth to premature twins.

“Look where we are. East meets West. Communism meets capitalism.” In 1998 Elliott Black leaves Indiana behind for a couple of years to teach English in Prague. The opening sequence, in which he discovers that his stolen shoes have been incorporated into an art installation, is an appropriate introduction to a country where bizarre things happen. Elliott doesn’t work for a traditional language school; his students are more likely to be people he meets in the pub or tobacco company executives. Their quirky, deadpan conversations are the highlight of the book.

Elliott starts dating a fellow teacher from England, Amanda (she “looked like azaleas in May and she spoke like the BBC World Service”), who also works as a translator. They live together in an apartment they call Graceland. Much of this short novel is about their low-key, slightly odd adventures, together and separately, while the epilogue sees Elliott looking back at their relationship from many years later.

I was tickled by a number of the turns of phrase, but didn’t feel particularly engaged with the plot, which was inspired by Kimberling’s own experiences living in Prague.

With thanks to Tinder Press for a proof copy to review.

“Sorrowful stories like airborne diseases made their way through the windows and under the doorframe, bubbled up like the bathtub drain. It was possible to fill Graceland with light and color and music and the smell of good food, and yet the flat was like a patient with some untreatable condition, and we got tired of palliative care.”

“‘It’s good to be out of Prague,’ he said. ‘Every inch drenched in blood and steeped in alchemy, with a whiff of Soviet body odor.’ ‘You should write for Lonely Planet,’ I said.”

Like Jessica Pan, I’m a shy introvert (a “shintrovert”) as well as an American in the UK, so I was intrigued to see the strategies she employed and the experiences she sought out during a year of behaving like an extrovert. She forced herself to talk to strangers on the tube, give a talk at London’s Union Chapel as part of the Moth, use friendship apps to make new girlfriends, do stand-up comedy and improv, go to networking events, take a holiday to an unknown destination, eat magic mushrooms, and host a big Thanksgiving shindig.

Like Help Me!, which is a fairly similar year challenge book, it’s funny, conversational and compulsive reading that was perfect for me to be picking up and reading in chunks while I was traveling. Although I don’t think I’d copy any of Pan’s experiments – there’s definitely a cathartic element to reading this; if you’re also an introvert, you’ll feel nothing but relief that she’s done these things so you don’t have to – I can at least emulate her in initiating deeper conversations with friends and pushing myself to attend literary and networking events instead of just staying at home.

With thanks to Doubleday UK for a proof copy to review.

I’m a big fan of Segal’s novels, especially The Innocents, one of the loveliest debut novels of the last decade, so I was delighted to hear she was coming out with a health-themed memoir about giving birth to premature twins. Mother Ship is a visceral diary of the first eight weeks in the lives of her daughters, who were born by Caesarean section at 29 weeks in October 2015 and spent the next two months in the NICU, “an extremely well-funded prison or perhaps more accurately a high-tech zoo.”

Segal strives to come to terms with this unnatural start to motherhood. “Taking my unready daughters from within me felt not like a birth but an evisceration,” she writes; “my children do not appear to require mothering. Instead they need sophisticated medical intervention.” She describes with tender precision the feeling of being torn: between the second novel she’d been in the middle of writing and the all-consuming nature of early parenthood; and between her two girls (known for much of the book as “A-lette” and “B-lette”), who are at one point separated in different hospitals.

As well as portraying her own state of mind, Segal crafts twinkly pen portraits of the others she encountered in the NICU, including the staff but especially her fellow preemie mums, who met in a “milking shed” where they pumped breast milk for the babies they were so afraid of losing that they resisted naming. (Though it was touch and go for a while, A-lette and B-lette finally earned the names Raffaella and Celeste and came home safely.) Female friendship is a subsidiary theme in this exploration of desperate love and helplessness. The layman’s look at the inside workings of medicine would have made this one of my current few favorites for next year’s Wellcome Book Prize (which, alas, is on hiatus). After encountering some unpleasant negativity about the NHS in a recent read, I was relieved to find that Segal’s outlook is pure gratitude.

With thanks to Chatto & Windus for the free copy for review.

The wedding of a college friend – who I calculated I’ve known at least half my life – was the excuse we needed to book a trip back to the States for the last two weeks of May. Along with the classy nuptials in the Fell’s Point area of Baltimore, we enjoyed a day’s sightseeing in Philadelphia, a couple of outings to watch birds and other wildlife on Cape May (a migration hotspot in New Jersey), two meet-ups with other friends, and plenty of relaxation time with my mom and sister, including a Memorial Day picnic at my mom’s retirement community and a tour of Antietam Battlefield. It was much hotter than anticipated, including some days in the high 80s or even 90s, and the hayfever, ticks and mosquitoes were bad, too, but we survived. 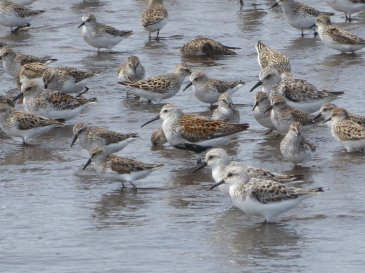 Shorebirds at Cape May

A park on Cape May

While back in Maryland I continued the intermittent downsizing process I’ve been going through for a while now. After being on the market for nearly a year, my family home finally sold and went to closing while we were over there. So that provided a scrap of closure, but my current estrangement from my father (we don’t even know where he’s living) means there’s a lot of continuing uncertainty.

In any case, I managed to reduce the number of boxes I’m storing with my sister from 29 to 20 by recycling lots of my old schoolwork, consolidating my mementos, reselling one box of books and donating another, donating a box of figurines and decorative bottles to a thrift store, displaying some at my mom’s place, giving away a few trinkets to a friend’s kids, and packing a bunch of stuff – photo albums and decorations as well as 64 books – in our various suitcases and hand luggage to take back to the UK. 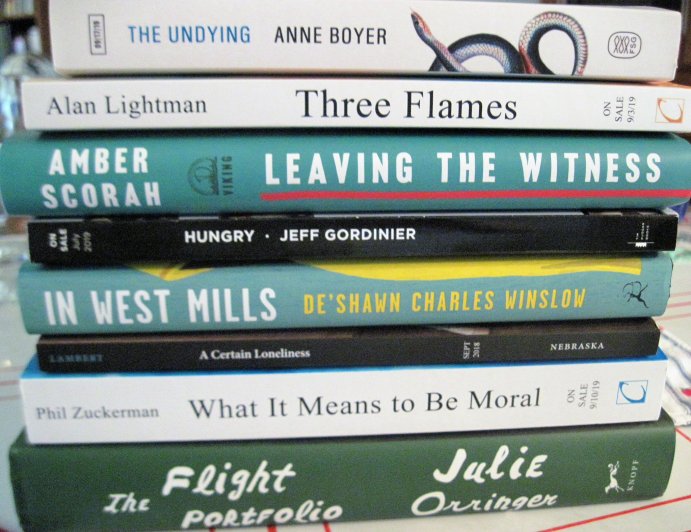 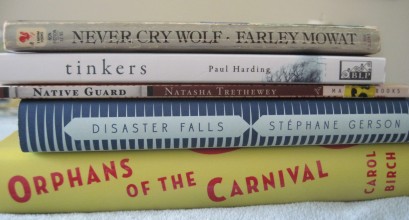 And I also acquired more books, of course! A whopping 46 of these were free: eight review copies were waiting for me at my mom’s place; three were from the outdoor free bin at 2nd & Charles, a secondhand bookstore; one was found in a Little Free Library near our friends’ place in New Jersey (Emerald City by Jennifer Egan, not pictured); and the rest were from The Book Thing of Baltimore, a legendary volunteer-run free bookshop. I mostly raided the biography section for an excellent selection of women’s life writing; the fiction is unalphabetized so harder to find anything in, but I picked up a few novels, too. My only purchases were new (remainder) copies of one novel and one memoir from Dollar Tree. Total book spending on the trip: just $2.12.

Two that I’d already started but finished on the plane ride over:

Three review books that will be featuring here in the near future:

I also read the first half or more of: The Music Shop by Rachel Joyce, my June book club book; Hungry by Jeff Gordinier, a journalist’s travelogue of his foodie journeys with René Redzepi of Noma fame, coming out in July; and the brand-new novel In West Mills by De’Shawn Charles Winslow – these last two are for upcoming BookBrowse reviews.

But the book I was most smug to have on my reading list for the trip was the recent novel Cape May by Chip Cheek. What could be more perfect for reading on location? I asked myself. Unfortunately, it stood out for the wrong reasons. In October 1957 a young pair of virgins, Effie and Henry, travel from Georgia to New Jersey for an off-season honeymoon in her uncle’s vacation home. They’re happy enough with each other but underwhelmed with the place (strangely, this matched my experience of Cape May), and even consider going home early until they fall in with Clara, a friend of Effie’s cousin; Clara’s lover, Max; and Max’s younger sister, Alma. Effie and Henry join the others for nightly drunken revelry.

[SPOILERS!] As the weeks pass Effie, ill and dejected, almost seems to disappear as Cheek delves into Henry’s besotted shenanigans, described in unnecessarily explicit sexual detail. When Effie makes a bid or two for her own sexual freedom late on, it only emphasizes the injustice of spending so much time foregrounding Henry’s perspective. Despite the strength of the period atmosphere and seaside location, this ends up being dull and dated. If you’re after a typically ‘trashy’ beach read and don’t mind lots of sex scenes, you may get on with it better than I did.

Vineland, New Jersey was on the way from our friends’ house to Cape May, so we stopped to take my proof copy of Barbara Kingsolver’s Unsheltered to its spiritual home. Alas, Vineland is an utterly boring small American town. However, Mary Treat at least appears on a painted mural on a building on the main street. The Historical Society, where Kingsolver did her research, was closed, but we photographed the outside.

What’s the last book you read ‘on location’? Did it work out well for you?