With bare trees leading down to the canal and frosty temperatures forecast for the weekend, it’s starting to feel more like winter here. I journeyed through a fine autumn with two obscure classics that ended up being 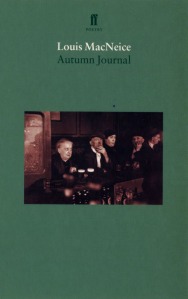 MacNeice, a poet and man of letters from Northern Ireland, wrote this long verse narrative between August 1938 and the turn of the following year. It’s simultaneously about everything and nothing, about everyday life for the common worker and the political rumblings that suggest all is not right in the world. As summer fades and Christmas draws closer, he reflects on his disconnection from Ireland; and on fear, apathy and the longing for purpose.

Two in every four lines rhyme, but the rhyme scheme is so subtle that I was far into the book before I recognized it. I tend not to like prose poems, but this book offers a nice halfway house between complete sentences and a stanza form, and it voices the kinds of feelings we can all relate to. How can this possibly be 80 years old? It is so relevant to our situation now.

we think ‘This must be wrong, it has happened before,

To be building shops when nobody can tell

What will happen next.

One way or the other?

To turn the stream of history will take

More than a by-election.’

Still there are … the seeds of energy and choice

Still alive even if forbidden, hidden,

And while a man has voice

He may recover music.

The university library copy I borrowed smells faintly of incense, so reading it was rather like slipping into the back pew of an old church and pondering timelessness. 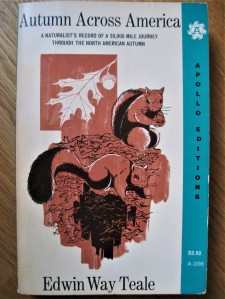 Teale is a lesser-known naturalist who specialized in insects and edited or introduced works by famous natural historians of a previous era like Thoreau, Fabre, Hudson and Muir. In the late 1940s he and his wife Nellie set out on a meandering 20,000-mile road trip from Cape Cod on the Atlantic coast to Point Reyes on the Pacific to track autumn from its first hints to its last gasp. It was the third of four seasonal journeys the Teales undertook in part to distract them from their grief over their son David, who was killed in Germany during WWII. Their route passes through about half the states and experiences nearly every landscape you can imagine, some that are familiar to me and others that would be totally new. They delve in rockpools; observe bird and monarch migration; cross desert, mountains and prairie; and watch sea otters at play.

Although there is a sense of abundance – they see a million ducks in one day, and pass dozens of roadkill jackrabbits – like Aldo Leopold, Teale was an early conservationist who sounded the alarm about flora and fauna becoming rarer: “So much was going even as we watched.” His descriptions of nature are simply gorgeous, while the scientific explanations of leaf color, “Indian summer” and animal communication are at just the right level for the average reader. This was a lucky find at the Book Thing of Baltimore this past spring, and if I ever get the chance, I will delight in reading the other three in the quartet.

I’m also still reading Led by the Nose: A Garden of Smells by Jenny Joseph, a book about what you see and smell in the garden month by month. I only have the December chapter still to read, followed by some lists of plants set out by ‘when they smell’ and when you plant them. I’ve also been slowly working through A Country Year: Living the Questions by Sue Hubbell, another Book Thing find. After her divorce, Hubbell lived alone on her 90 acres in the Ozarks of Missouri, keeping bees and conscientiously rebuilding a life in communion with nature. I still have the final two sections, “Winter” and “Spring,” left to read.

How’s the weather where you are?

Have you read any “Autumn” books lately?

A Bouquet of Spring Reading

In March through May I often try to read a few gardening-themed books and/or ones with “spring” in the title. Here are some of the ones that I have on the go as occasional reading: 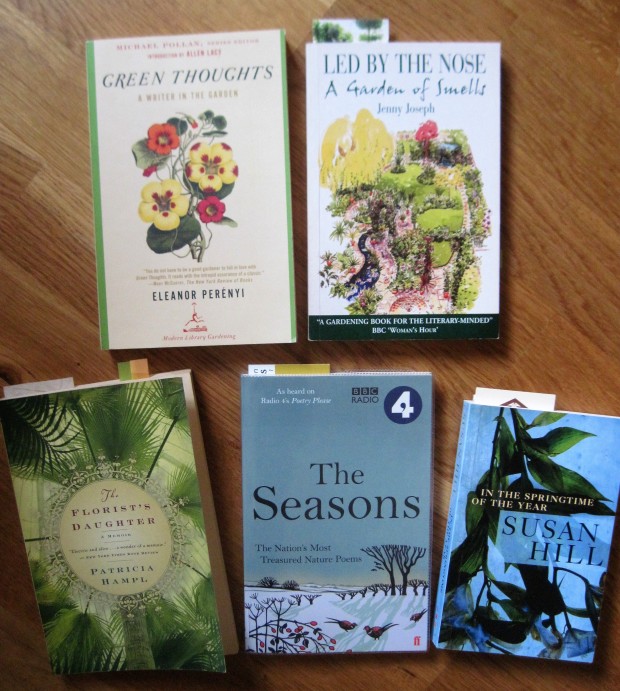 The Florist’s Daughter by Patricia Hampl: Her mother’s final illness led Hampl to reflect on her upbringing in St. Paul, Minnesota as the daughter of an Irish Catholic library clerk and a Czech florist. I love how she writes about small-town life and helping out in her father’s flower shop:

“These apparently ordinary people in our ordinary town, living faultlessly ordinary lives … why do I persist in thinking—knowing—they weren’t ordinary at all? … Nostalgia is really a kind of loyalty”

“it was my father’s domain, but it was also marvelously other, this place heavy with the drowsy scent of velvet-petaled roses and Provençal freesias in the middle of winter, the damp-earth spring fragrance of just-watered azaleas and cyclamen” 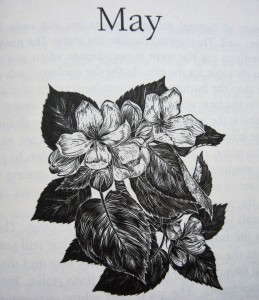 Led by the Nose: A Garden of Smells by Jenny Joseph: Joseph’s name might not sound familiar, but she was the author of the famous poem “Warning: When I Am an Old Woman I Shall Wear Purple” and died early last year. This is a pleasant set of short pieces about what you might see and sense in your garden month by month. “Gardeners do indeed look before and after, at the same time living, as no one else, in the now of the nose,” she maintains. I’m particularly fascinated by the sense of smell and how a writer can describe odors, so I was delighted to find this in a charity shop in Edinburgh last year and have been reading it a few pages at a time as a bedside book. I especially like the wood engravings by Yvonne Skargon that head each chapter.

Green Thoughts: A Writer in the Garden by Eleanor Perényi: A somewhat dense collection of few-page essays, arranged in alphabetical order, on particular plants, tools and techniques. I tried reading it straight through last year and only made it as far as “Beans.” My new strategy is to keep it on my bedside shelves and dip into whichever pieces catch my attention. I don’t have particularly green fingers, so it’s not a surprise that my eye recently alighted on the essay “Failure,” which opens, “Sooner or later every gardener must face the fact that certain things are going to die on him. It is a temptation to be anthropomorphic about plants, to suspect that they do it to annoy.” 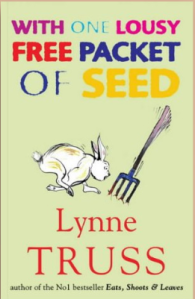 With One Lousy Free Packet of Seed by Lynne Truss (DNF at page 131 out of 210): A faltering gardening magazine is about to be closed down, but Osborne only finds out when he’s already down in Devon doing the research for his regular “Me and My Shed” column with a TV actress. Hijinks were promised as the rest of the put-out staff descend on Honiton, but by nearly the two-thirds point it all still felt like preamble, laying out the characters and their backstories, connections and motivations. My favorite minor character was Makepeace, a pugnacious book reviewer: “he used his great capacities as a professional know-all as a perfectly acceptable substitute for either insight or style.”

The Seasons, a Faber & Faber / BBC Radio 4 poetry anthology: From Chaucer and other Old English poets to Seamus Heaney (“Death of a Naturalist”) and Philip Larkin (“The Trees”), the spring section offers a good mixture of recent and traditional, familiar and new. A favorite passage was “May come up with fiddle-bows, / May come up with blossom, / May come up the same again, / The same again but different” (from “Nuts in May” by Louis MacNeice). Once we’re back from America I’ll pick up with the summer selections.

In the Springtime of the Year by Susan Hill: Early one spring, Ruth Bryce’s husband, Ben, dies in a forestry accident. They had only been married a year and here she is, aged twenty-one and a widow. Ben’s little brother, 14-year-old Jo, is a faithful visitor, but after the funeral many simply leave Ruth alone. I’m 100 pages in and still waiting for there to be a plot as such; so far it’s a lovely, quiet meditation on grief and solitude amid the rhythms of country life. Ben’s death is described as a “stone cast into still water,” and here at nearly the halfway point we’re seeing how some of the ripples spread out beyond his immediate family. I’m enjoying the writing more than in the three other Hill books I’ve read. 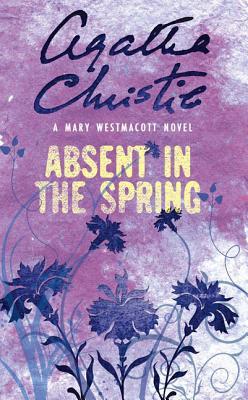 Absent in the Spring by Mary Westmacott: (The title doesn’t actually have anything to do with the season; it’s a quotation from Shakespeare’s Sonnet 98: “From you have I been absent in the spring.”) From 1944, this is the third of six novels Agatha Christie published under the alias Mary Westmacott. Joan Scudamore, traveling back to London from Baghdad after a visit to her adult daughter, encounters bad weather and misses her train, which leaves her stranded in the desert for days that feel more like weeks. We’re led back through scenes from Joan’s earlier life and realize that she’s utterly clueless about what those closest to her want and think. Rather like Olive Kitteridge, Joan is difficult in ways she doesn’t fully acknowledge. Like a desert mirage, the truth of who she’s been and what she’s done is hazy, and her realization feels a little drawn out and obvious. Once she gets back to London, will she act on what she’s discovered about herself and reform her life, or just slip back into her old habits? This is a short and immersive book, and a cautionary tale to boot. It examines the interplay between duty and happiness, and the temptation of living vicariously through one’s children.

Have you been reading anything particularly appropriate for spring this year?