Below I’ve chosen my seven favorite nonfiction books published in 2017, followed by three older titles that I only recently discovered. Many of these books have already featured on the blog in some way over the course of the year. To keep it simple for myself as well as for all of you who are figuring out whether you’re interested in these books or not, I’m mostly limiting myself to two sentences per title: the first is a potted summary; the second tells you why you should read it. I also link to any full reviews.

And my nonfiction book of the year was:

1. The Shadow in the Garden: A Biographer’s Tale by James Atlas: I read this in August, planning to contrast it with Claire Tomalin’s A Life of My Own, another biographer’s memoir, for the LARB. It would have been a brilliant article, believe me. But they didn’t bite, and by the time I approached the TLS they’d already arranged coverage of the books. Alas! Such is the life of a freelancer. Since then I’ve struggled to know what to say about Atlas’s book that would explain why I loved it so much that my paperback proof is riddled with Post-It flags. (It’s going to take more than a couple of sentences…)

Much more so than Tomalin, Atlas gave me a real sense of what it’s like to immerse yourself in another person’s life. He made it up as he went along: he was only 25 when he got the contract to write a biography of the poet Delmore Schwartz, who died a penniless alcoholic at age 52. Writing about the deceased was a whole different matter to engaging with a living figure, as Atlas did when he wrote his biography of Saul Bellow in the 1990s. 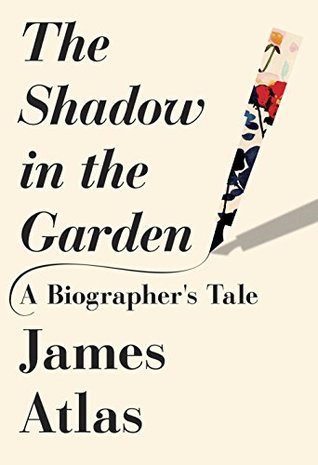 Atlas perceptively explores the connections between Schwartz and Bellow (Schwartz was the model for the protagonist of Bellow’s 1975 Pulitzer winner, Humboldt’s Gift) and between Bellow and himself (a Chicago upbringing with Russian Jewish immigrant ancestors), but also sets his work in the context of centuries of biographical achievement – from Boswell’s The Life of Samuel Johnson through master biographers like Richard Holmes, Leon Edel and Richard Ellmann (Atlas’s supervisor during his fellowship at Oxford) to recent controversial biographies of Robert Frost and Vladimir Nabokov.

This book deals with the nitty-gritty of archival research and how technology has changed it; Atlas also talks story-telling strategies and the challenge of impartiality, and ponders how we look for the patterns in a life that might explain what, besides genius, accounts for a writer’s skill. Even the footnotes are illuminating, and from the notes I learned about a whole raft of biographies and books on the biographer’s trade that I’d like to read. After I finished reading it I spent a few days dreamily wondering if I might write a biography some day. For anyone remotely interested in life writing, pick this up with my highest recommendation.

I’ll make it up to an even 10 with a few backlist titles I also loved:

The Unexpected Professor: An Oxford Life in Books by John Carey (2014): Carey gives a thorough picture of events from his personal and professional life, but the focus is always on his literary education: the books that have meant the most to him and the way his taste and academic specialties have developed over the years. Ultimately what this book conveys is the joy of being a lifelong reader.

A Sand County Almanac and Sketches Here and There by Aldo Leopold (1949): So many of Leopold’s musings ring true today: how we only appreciate wildlife if we can put an economic value on it, the troubles we get into when we eradicate predators and let prey animals run rampant, and the danger of being disconnected from the land that supplies our very life. And all this he delivers in stunning, incisive prose.

The Argonauts by Maggie Nelson (2015): An exquisite interrogation of gender identity and an invaluable reminder that the supposed complications of making a queer family just boil down to your basic human experiences of birth, love and death. I preferred those passages where Nelson allows herself to string her fragments into more extended autobiographical meditations, like the brilliant final 20 pages interspersing her memories of giving birth to her son Iggy with an account of the deathbed vigil her partner (artist Harry Dodge) held for his mother; it had me breathless and in tears, on a plane of all places.

What were some of your top nonfiction reads of the year?

26th: Doorstopper of the Month

28th: Runners-up and other superlatives