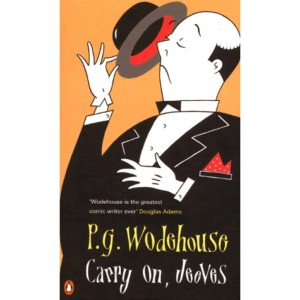 I’d never read any P.G. Wodehouse before, but of course I was familiar with his two most famous creations, empty-headed aristocrat Bertie Wooster and his omniscient manservant, Jeeves. Many people are turning to cheerful, witty reads during lockdown, so this seemed like a perfect time to give one of the books a try. The bio in my secondhand paperback calls this the first set of Jeeves and Wooster tales, while Goodreads lists it as the third book in a 14-strong series. I didn’t realize when I bought this or picked it up to read that it was a collection of 10 short stories, but that makes sense – these are such silly, inconsequential plots that they couldn’t possibly be sustained for more than about 20 pages each.

It doesn’t take long to get the hang of a Jeeves and Wooster story. Bertie or one of his rich, vapid pals will get into a spot of trouble, usually because of an aunt’s expectations, and a madcap plan – swapping places, impersonation, kidnapping or the like – is required to get out of it and/or get the girl. Jeeves has a brilliant idea and saves the day, all while commenting disapprovingly on Bertie’s fashion choices. Most of the stories are set in London and its environs, but a few also have the pair transplanted to New York City, where Bertie seems to have nothing better to do than lend his chums money. The first nine tales are narrated by Bertie, while the final one has Jeeves as narrator – on a visit to a girls’ school he plays a rather wicked prank to disabuse Bertie of the notion that he might like to adopt a daughter.

These stories were amusing enough, yet quickly blended into one. Pretty much as soon as I finished a story, I forgot what it was about. Looking back, not even the story titles can spark a memory. I made the mistake of not taking notes, so I’ve retained only general impressions. I enjoyed Bertie’s voice and the period slang as well as the dynamic between master and servant – it’s clear who’s really in charge here. “[T]his was obviously a cove of rare intelligence, and it would be a comfort in a lot of ways to have him doing the thinking for me,” Bertie says. “It’s a rummy thing, but when you come down to it Jeeves is always right.” Though I’ve never seen the adaptations, I couldn’t get the faces of Hugh Laurie and Stephen Fry out of my head. That’s no problem, though, as the casting couldn’t be more perfect.

I’m not sure if I’ll bother picking up another Wodehouse book, as I expect that his work is all of a piece. However, you could certainly do worse if you’re after a lighthearted read.